Peter Norcliffe recalls the 'proper' snow of 1947, which started falling in January and didn't clear until mid-March, leaving many homes stranded for weeks. 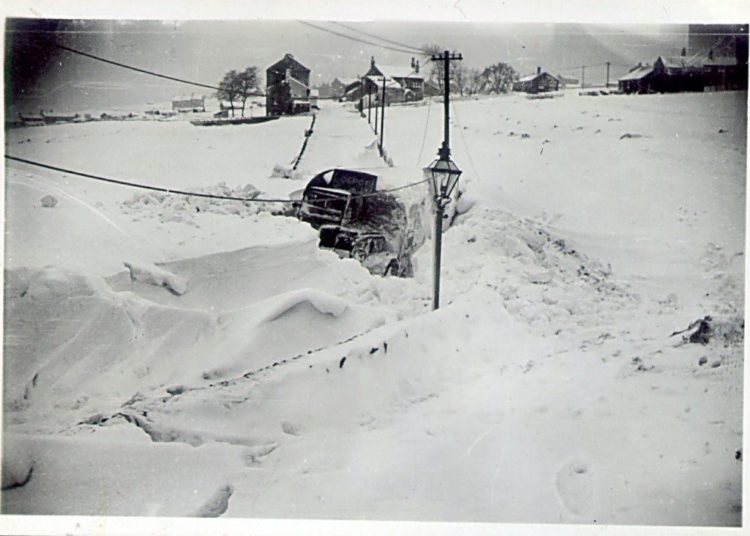 The bus stranded on Slades Road, the Bolster Moor Co-op is the first building on the left, now it is The Golcar Lily restaurant, Headwall Green is in the distance.

The recent snowfalls on the Pennines reminded me of earlier times when we had proper snow. Although I didn’t arrive into this world until later in the summer, the early months of 1947 saw Huddersfield endure weather conditions that would to this day be used as a benchmark for anything that each following winter produced. Snow started to fall in late January and did not clear until mid-March. Blizzard conditions also caused severe drifting as high as the upper stories of homes throughout the country, the road and rail network were at a standstill and basic needs could not get through.

The residents of Scapegoat Hill pulled together as they had just two years earlier during the war. They manually dug out almost half a mile to the main road which allowed coal, bread, milk and other essentials to be delivered. Dad told me that everyone who helped dig out was given one free bag of coal. He also described how they first had to dig tunnels to their front doors from High Street, Scape, before attempting to dig for freedom and to get any rations that could get through – the very basic essentials.

There was no hoarding of toilet rolls in those days, which were a luxury anyway. Under normal circumstances a newspaper cut into squares and hung on a piece of hairy string on the wall of the outside toilet was plenty good enough for the likes of us. If someone felt really flush (no pun intended), or were trying to make an impression, they would buy Izal toilet roll. This was greased paper and it put on more than it took off. It was excellent tracing paper though – not after it had been used, of course, even then you could hardly tell whether it had actually been used.

In winter there was no hanging about in an outside lav. Freezing, damp conditions meant that the seats had a layer of ice on them. The door did little to keep out the draughts, and even less to aid privacy, as the doors often had a small diamond or moon-shaped hole cut in them so anyone walking up to the door could ascertain if it was occupied. The only people walking up to that door would have been the family anyway, as each row of terraces had a row of outside toilets nearby, one toilet per house. They were also used as handy sheds, not for children’s toys, garden furniture, barbeques or bikes, but maybe for the clothes props and yard brush.

Many toilets were drop design, which consisted of a plank of wood with a hole cut in it, sometimes two or even three holes, including a smaller child-sized one (since sometimes conversations were far too important to wait for the conclusion of ablutions). The liquids would just seep away into the ground, but the solids were periodically collected in the Colne Valley by two very jolly characters, who shovelled the contents of the toilet from underneath into what the locals called ‘the blue wagon’ because it was blue. My brother-in-law John seems to remember that they didn’t wear gloves either; elf and safety wasn’t invented yet.

When the drop toilet chamber had been emptied, the two very jolly chaps scattered purple disinfectant powder all around, which had a very strong smell, and if you were anywhere near it took your breath away. That’s probably why the two blue wagon chaps were so jolly: they were no doubt as high as kites. They probably got used to the smell and didn’t notice it much, but I wonder if their wives ever did, if they had a wife of course (they surely didn’t have children!).

These drop toilets unsurprisingly had a very distinctive smell, and it was always the same smell, similar to the smells we used to get from sewage works, but with subtle undertones. We are kept safe even from that now, since it has been deemed there should be no unpleasantness in our lives –though, in my humble opinion, this is why we can overreact to some relatively minor mishaps and become easily upset.

Under normal circumstances, there was little personal hygiene embarrassment. Group toilet use was not uncommon, nor were Friday nights in the tin bath in front of the fire, whether we needed it or not. Youngest child first, then my older sister, then Mum and Dad last. And even though it was occasionally topped up with a kettle of hot water, it was still cold and grubby by the time Dad got in there. There was no television in those days of course; bath night was an entertainment highlight.

The outside lavs were in some sort of purpose-made outbuilding, usually brick built. Ours at Bolster Moor was a posh one, which had a traditional pan and a flush cistern. It froze in winter though, unless Dad put the Tilley lamp, or some other paraffin burner in there. The main water pipe often froze anyway, but at least we had somewhere to throw the contents of the ‘gozunder’ (chamber pot) so called because it gozunder the bed.

This first photo is what’s left of a ‘one holer’ drop toilet (luxury) and I think I can see evidence of a nail in the wall to hang the squares of newspaper. The photo on the right is an example of an old posh flush toilet. The photo below is an excellent example of a yard brush, often called a besom brush, but strictly speaking this is incorrect, as a besom brush has swigs or bristles wrapped around a central handle, like a witch’s broom. In this part of the world, the old chaps used to call this type of long handle a ‘brush shtaith’ (probably Scandinavian); the hole at the front is for the candle when sweeping in the dark, of course, particularly useful for night workers. I’ve had this yard brush for over 40 years, the reason it’s lasted so long is because I’ve looked after it and carried out regular maintenance and servicing. It’s had five new heads and three new handles in them 40 years.

Back to the 1947 snow. The main photo for this article below shows a single decker bus that is almost covered after it had just left Scapegoat Hill, bound for Huddersfield. The sign at the front reads ‘Depot’. It had become stranded on Bolster Moor during the first snow fall in January, and it was not recovered until mid-March. (No, there was no-one left on board all that time).

Makeshift large timber sledges were constructed and harnessed to any available horses, which allowed some essential goods to be delivered. My cousin David remembered a sledge the size of a barn door carrying several milk churns. It may even have been a barn door, though it’s more likely to have been a sled normally used during haymaking.

The freezing conditions lasted so long that, when the thaw eventually came, many roads and water pipes were badly damaged and it took months for all the repairs to be carried out.

I was born in the June of that year and by contrast to the previous winter, the summer was swelteringly hot and poor ole Mum struggled with a heavy pregnancy. I was a big baby; I liked my food even before I was born. Apparently, as soon as I started to walk, I would storm into the kitchen in the morning demanding my ‘politch’ on the dot. Mum had her hands full trying to keep me fed. Many of the family have said I was a little git when I was hungry. I’m not like that now; at least I’m taller.

I have always liked my porridge and I am happy to prepare it myself now. Thick porridge with proper local honey from George the honey man. Can’t fault it, simple pleasures can be just as heart-warming as great wealth. Sometimes. Maybe.