The mills' management no doubt assumed, that the world would come back because we’re British. But the world didn’t. 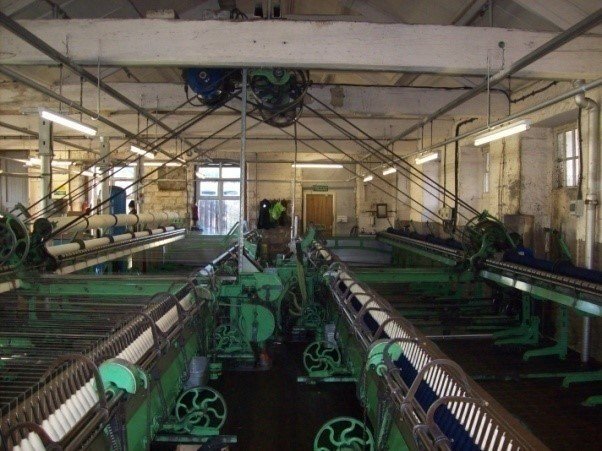 An example of a J. Charlesworth mule from 1952

Textile mills had been allowed to run down before I started working, mainly through lack of investment, and cheap foreign imports. The management no doubt assumed, as did the management of many other British industries, that the world would come back because we’re British. But the world didn’t.

However, there was still plenty of work in the 1960s and early 1970s. We could fall out with the boss in the morning and find another job in the afternoon – in fact, there was a period in the early 1970s when I had 11 jobs in two years (I fell out with a lot of bosses and they equally fell out with me!). But change was afoot.

When I started, Saturday mornings were still regarded as being part of the working week. I had to work 48 hours for my £4/10 shillings; sick pay was almost non-existent and there was often much less than a month’s holiday a year. Very few companies gave bonuses – I never worked for one – and there certainly wasn’t anything like maternity leave; indeed, we would probably have laughed at the idea and also laughed at calling it ‘leave’ – posh, soft warts would have been the response!

The Colne Valley, home to almost all of the mills I worked at, is a steep narrow valley high in the Pennines. There were often pea soup fogs in those days, but even on relatively clear days there was a constant mist in the valley. The only time this mist was noticed was when it wasn’t there, and that was during the textile fotnit. All the mills shut down and many people went away to the seaside; therefore the mill and house chimneys were no longer belching out their thick black smoke.

One may ask, why were people still lighting fires in summer? The answer is that this was often the only way to provide hot water (and this is still the case in some Yorkshire houses!). However, this atmosphere of soot and grime had its benefits. For example, black spot couldn’t form on the roses and so we had some of the best blooms in the country. The same grubby atmosphere also killed the algae that now forms on all the stone sets and footpaths, making it sometimes treacherous to walk on.

There were very few trees in the valley. The black and white photo below was taken in about 1910 and the colour picture in August 2020.

Judging by the haymaking in the fields of the first photo, both seem to have been taken about the same time of year. In the foreground are the River Colne and the Huddersfield Narrow Canal. Almost in the centre of this photo is Golcar railway station, closed in 1968 shortly after the Beeching Report into railway efficiency. In the centre horizon is Golcar Church School, to the left is Golcar Church and to the right is the Providence Chapel.

Charlie Senior was a mule spinner at C&Js and was also the mill first-aid man. People working in and around mills, factories, building sites and the like during the 1960s didn’t have the same attitude towards health and safety that we find today. Then, the prevailing attitude was ‘life is cheap’. Things needed to improve and it’s fair to say that one of the benefits of being a member of the European Union over recent decades is that the British government has been forced to provide a better and safer working environment.

I often had conversations with Charlie. He was an intelligent and interesting character, and it was he who encouraged me to take more of an interest in first aid and persuaded me to be a blood donor. Charlie was often called upon to deal with scrapes, cuts and bruises of varying degrees of seriousness. All textile machinery is capable of inflicting the most horrible injuries or death.

During my apprenticeship I was involved with three serious incidents where we had to remove parts of the machinery to free a trapped worker who had their hands securely caught in a carding machine. Luckily all three survived their encounter, but they have had to live the rest of their lives with parts of their hands missing. My Granddad Holdsworth, Grandma Maggie’s husband, broke his leg following an argument with a carding machine and had a limp for the rest of his life.

By the time I started work in 1962, there had been many workers from other parts of the world joining the British workforce. Along with the Eastern Europeans, there were many from the Caribbean and southern Asia. I found all the foreign workers in’t mill to be hard-working and interesting, helpful, friendly and willing to please. The West Indian lads were great fun, always ready for a laugh or a mucky song. The South Asian lads tended to keep themselves to themselves, mainly because of the language barrier, but if they were asked to do something it was no trouble.

My granddad Wallace Norcliffe worked in the textile industry as a mule spinner, as did two of his sons: my dad Clifford, and Dad’s brother Ronnie. The spinning mule was a fascinating and complicated piece of machinery. I became a spinning charge hand after my apprenticeship and was responsible for setting the machinery to produce the desired thread and for repairing any breakdowns.

The mule, invented by Samuel Crompton in 1779, was developed and named because it was a hybrid of the ‘Spinning Jenny’, invented by James Hargreaves in, or around, 1764, and the ‘Water Frame’, invented by Richard Arkwright in 1762. Over two hundred years, several adaptations and extensions were added, although the same basic design was kept. Eventually, before the spinning frame became popular, the mule had every type of mechanical drive imaginable: there were several types and sizes of ropes, leather belts, gears, chains, clutches, pulleys, bearings and cams, with each modification added to the existing machine. Consequently, the mule became very complicated. At the time that I was working in’t mill all the machinery was well over fifty years old, so it’s a wonder that any ran at all. But the mule was fascinating; I would often just watch all the parts working together in unison, almost like a living body.

The only time I saw a modern textile machine was while I was studying in Huddersfield, which proudly boasted an excellent tec (technical college). I attended tec for one day and two nights a week. It’s now a university, for better or worse. (Part of the ‘better’ is that it has an excellent music department.)

Eventually the ‘Spinning Frame’, which had a direct family lineage back to the ‘Water Frame’, became more efficient and easier to maintain, and a less-skilled, therefore cheaper, workforce was required. Because of the efficiency and speed of the modern spinning frame it was also able to produce more yarn. I recently took a photo of the J. Charleworth mule, one of the last mules to be made (see cover photo). The owner of this mill was proud to tell me that they are the only company in Huddersfield still using the mule-spinning machine. The photo shows a pair of mules, which was the normal configuration called a ‘mule gate’; the person who ran the machine was the ‘spinner’.

It has now been transformed into accommodation and a gymnasium. The mill chimney has been preserved as a memorial, and has a tree growing from the top. The photo on the right is also a preserved and disused chimney. This chimney was the shortest and the longest chimney in the Colne Valley. What you can see is just the top section, now also the proud owner of its own tree. The rest of the chimney was built diagonally up the hillside from the Ramsden Mill boiler house then up to the shortest chimney you can see.

The next photos show what happens when the owner needs to demolish the mill but a local volunteer group desperately wants it preserving for posterity. This battle raged for 25 years or more, while the building crumbled away. A company periodically erected some scaffolding to the walls adjoining the canal towpath, then after the next strong winds they had to return to erect some more. Sense seems to be entering the discussion at last and I have recently noticed a planning application to partly demolish and build new accommodation on the site.

The great age of the working Yorkshire mills is now part of our history and what remains is derelict or converted buildings, and the many museums devoted to preserving the heritage of the mills and the mill workers. These contain valuable reminders of our industrial past, but they have the disadvantage of being unable to reproduce the smells, noise, dust, and danger associated with all mills. In fact, nobody would visit a museum if there was anything like the normal working environment of the textile mill, unforgettable to those of us who experienced it.