Norky remembers Saturdays in his youth going out, meeting girls, drinking, and the embarrassing search for condoms! 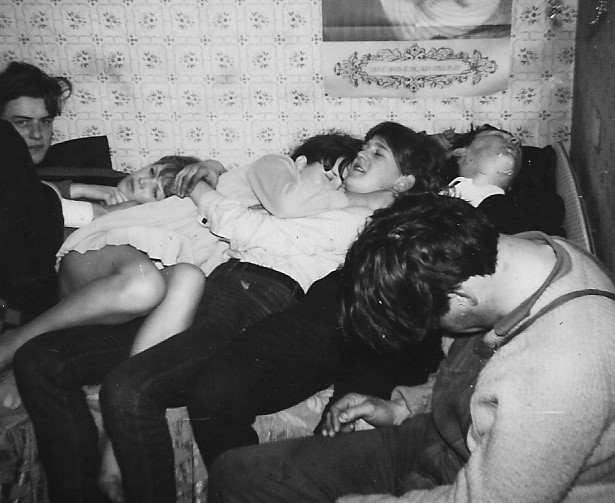 Photo by the author

The ‘swinging sixties’ may or may not have existed. If it did, it never swung through Huddersfield. We were still recovering from the excitement of running water, indoor bathrooms, and electricity. London and perhaps Liverpool and Manchester may have felt its presence, but if it made any attempt to enter Yorkshire, I didn’t notice.

During my early youth, when couples came together, they expected – and were expected – to spend a lifetime of love, devotion and commitment on their relationship. There was a hope, if not expectation, that both were virginal, or at least appeared or claimed to be so. Finding such a partner was relatively straightforward and not all that uncommon, since at the time abstinence was the only reliable form of birth control.

If the relationship blossomed and the young man appeared committed to marriage, offered a promise of life-long support of ageing grandparents or at least loved cats, then there was an increasing probability that this relationship would blossom into a passionate bonding and a special cuddle of the type Mums told you nothing about.

If that happened, it was the young man’s responsibility to ensure pregnancy was avoided. Condoms were available of course, but only in very limited outlets – barbers and the chemists being the only reliable source. There was your Jack-the-lad mate who always seemed to have some, so you might choose to pay an inflated price and hope that you’d also appear to be a Jack-the-lad, but then find that the ‘best by date’ was the previous year.

Still, it was kept in your wallet anyway, and when the wallet was changed the condom was still there. That’s when you realised that the condom was lasting longer than your leather wallet. Buying condoms was guaranteed to involve embarrassment. The classic 1962 film A kind of Loving starring Alan Bates, shows him entering a chemist to buy condoms but once inside he becomes overwhelmingly embarrassed and leaves with a bottle of Lucozade instead.

The whole subject of sex was embarrassing for the parents and confusing for the children. I remember asking Mum what certain round-shaped bits of my lower anatomy were for. I’d have been about 35, years old I think (or probably nearer nine or ten). Mum said, “I don’t know, ask your dad”. So I did, but Dad also said “I don’t know”.

That was the end of my sex education until the morning of my wedding. Moi had had a miscarriage a few weeks earlier, but Dad still felt it his duty to take me to one side and quietly ask, “Do you know how babies are made?” Even though Dad had spent nearly five years at sea fighting the dastardly Germans, he seemed very relieved when I told him that I knew enough to get by.

That’s the story of many aspects of my life really – just knowing enough to get by.

Finding love on a Saturday night out

One of the ways to meet a future life-long partner was a Saturday afternoon stroll around Huddersfield town centre with our mates. The girls would wash their hair in the morning and as hair dryers were not readily available, they fitted huge curlers and covered the whole thing with a scarf.

Us chaps would perhaps catch the eye of a girl and practise our pathetic chat-up lines. It’s a wonder any of us got a second glance. That was another responsibility for the chaps: they had to do the chatting up. The nearest that a young woman may have got to initiate the chat-up would go something like “My mate fancies your mate” and a complicated go-between would follow.

We’d make arrangements to meet that night outside Woolies (Woolworths) or if we were feeling posh, Rushworth’s department store.

If we had taken the time to look through the Friday night’s Examiner, we could also decide on about a dozen local cinemas, at least six in the town centre alone. Again, if we wanted to impress, we would suggest meeting outside the ABC cinema on Market Street. Originally called the Ritz Cinema it became the ABC in 1961, but we still referred to it as ‘The Ritz’. It was closed in 1983 and demolished soon after.

The problems we often found when meeting the young woman that we’d first met a few hours earlier was that we couldn’t recognise them, as their appearance had drastically changed. They were wearing posh frocks and Saturday night makeup, but the biggest difference was the hair. It was often backcombed to within an inch of its life and dominated the whole head and surrounding district.

Saturday afternoon look. Moi (on the left) and her friend Maureen favoured straight hair and a big fringe, so stuck theirs down with Sellotape. Except when they didn’t of course, all very confusing. This was a good example of “my mate fancies your mate”: Maureen and my mate Dave have been married for almost as long as Moi and I have. 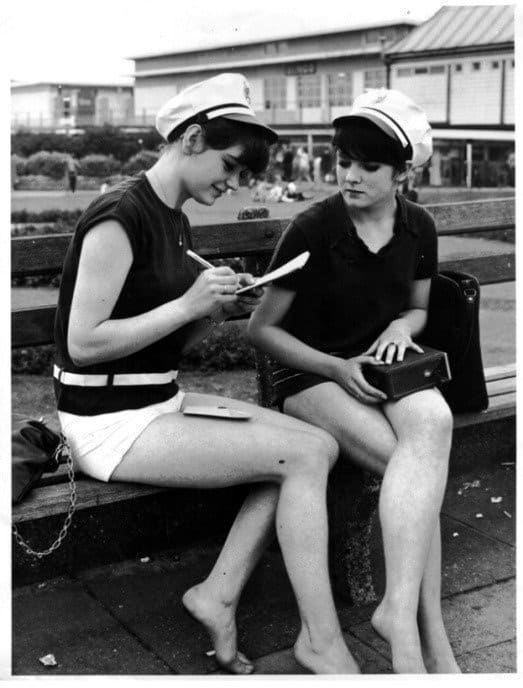 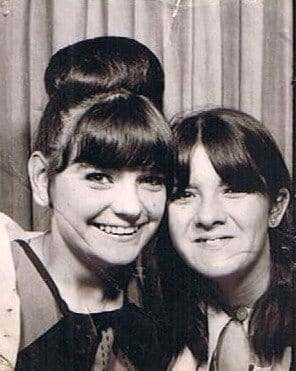 Saturday afternoon look. Moi (on the left) and her friend Maureen favoured straight hair and a big fringe, so stuck theirs down with Sellotape. Except when they didn’t of course, all very confusing. This was a good example of “my mate fancies your mate” Maureen has been married to my mate Dave for almost as long as me and Moi have.

On our Saturday afternoon strolls we would inevitably migrate to the music shops where we could meet a girl. We could also ask to listen to a particular record. One of the staff would place the record on one of several turntables behind the counter and then we were told which booth to use.

Perhaps we could get three people in the booth, which was the size of an old telephone box. Woods music shop was a bit posh, and they would only let us listen to two records before throwing us out. They didn’t like young chaps and thought rock and roll was the work of the Devil anyway. On the other hand, WH Smith’s had a very pleasant assistant called Beverley working behind the counter, and she let us listen to as many as we wanted without buying.

Crow Lane Youth Club was a very popular meeting place for us. We could play cards, chess, badminton, table tennis and watch our favourite television programmes of the time, then we would venture on to the pub.

It may seem odd that a youth club catered for young people old enough to go to pubs, but the age ranged from about 15 to 20 years old. The youth leaders were Pat (Patrick) and Sylvia, both very capable, pleasant and go-to people for help and guidance. There was very little aggravation in the club, but if there was, it was easily sorted out by Pat, an ex-boxer of Irish descent.

Crow Lane sometimes had live local groups, of which there were many. Guitar and drum groups were becoming well established, with many rock and roll songs coming to Britain from the USA, all needing 2/3 guitars, a set of drums and a singer.

But the music establishment, from the likes of Woods Music Shop to the BBC, assumed it was only going to be a fad, hence the popularity of Radio Caroline and Radio Luxemburg. The BBC was eventually dragged kicking and screaming into the modern world, and in 1967, forced to compete with the pirate radio stations, launched Radio One.

Traditional ballroom dance halls had been available in Huddersfield for generations, and still are. But in the 50s and 60s the Devil’s dance – jiving – was taking root, as was the wearing of skirts that revealed the stocking tops. And that was just the chaps.

And, of course, there were plenty of parties.