Peter Norcliffe remembers John Wesley's description of people from Huddersfield as 'savage and uncouth'. He tells of the Duediz travellers who were resented by locals. The people of Golcar seemed to make a better impression on John Wesley though. 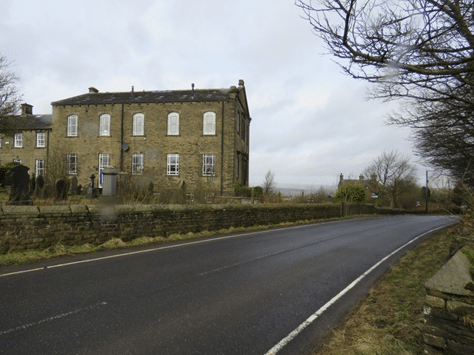 When the preacher John Wesley visited Huddersfield in 1757, he was less than complimentary about the inhabitants, describing them as savage, uncouth and ignorant. And he had just negotiated a path over the formidable high reaches of the Pennines from Saddleworth, which must say something.

When he was describing the coarseness of the people of Huddersfield in this way, he may have had the Duediz in mind, or may have had the misfortune to have met them on his travels. The Duediz, a name that seems to be connected with the dialect form for George, were also known as Burntplatters  and were a group of people living (if that’s the right word) in an area called Burnt Plats. This was an area of moorland high up the Colne Valley slopes that had been reclaimed by burning, hence part of the name.

The Duediz developed their own codes and laws, and their houses were little more than holes in the ground with logs forming the roof with earth sods or turf laid on top. They seem to have financed some of their lifestyle by robbing the travellers and traders on the packhorse route that eventually became the turn pike road between Huddersfield and Rochdale, the road that is now the A640, New Hey Road.

The locals resented any connection with the Duediz and described them as foreigners or itinerant travellers (Gypsies). But the 1841 census for this area included the surnames Parkin, Sykes and Pearson, which are all local names, particularly Sykes. Indeed, modern DNA analysis has suggested that the surname ‘Sykes’ came from Slawit (Slaithwaite) which is only two miles from Burnt Plats.

Whether or not John Wesley’s generally poor opinion of Huddersfield folk was influenced by the Duediz, he did make one exception and that was for the people of Gowca (Golcar). He described them in his diaries as “gentle as Lilies” compared with the people of Bolster Moor and Scapegoat Hill!

The photo on the left is where John Wesley preached to the civilised inhabitants of Gowca. He must have had a head for heights: you wouldn’t want to step off the end of that rock. A set of specially constructed steps down to his rocky pulpit can still be seen to the right. In the photo on the right, you can see the view from where the congregation would have stood. The pulpit is the black rock in the centre of the photo (look closely).

This is the Golcar Museum, and shows an excellent example of a building with south facing windows to the upper floors once used for weaving. In its previous life, this green door under the museum sign was the entrance to the chippy and the capped well was just inside, so everyone entering and leaving stepped on or over the well.

At the far end of the museum building there is a dark stone against the museum wall, which is an early example of a spin dryer used by the weavers. In the photo below, you can see three holes in the stone where a bracket holding a stick was placed. A basket holding raw wool or yarn was hung from the stick and the loose end of the stick was whizzed around by one of the workers, which then threw off the excess water.

As Golcar and many of the old weavers’ cottages are built on the hillside, being able to lean on a roof from the uphill side is not unusual. Below are examples of two and three-storey buildings on the lower slope of the hillside.

Many of the walks that we now are lucky enough to enjoy were originally constructed to connect villages and hamlets to their nearest or favoured places of worship. It is a mystery where people like John Wesley and the more isolated chapels got their congregation from. Even though he describes the people of Bolster Moor as uncouth and ignorant, they still boasted three chapels within approximately a half-mile radios. Scapegoat Hill could only muster one, Gowca another two, and an excellent example of a Waterloo church.

This main photo at the top of the article is of Pole Moor Chapel, in the middle of nowhere. Many chapels were built off the beaten track because the Church of England controlled vast amounts of land, power and influence, and they would not have made things easy for a rival group to get established. Even then, many did and still do.

There were only the occasional farmstead and hamlet near many of these outlying chapels. Each one must have had its own vicar with use of a manse, deacons and all the governing bodies needed to run these establishments. Many chapels were of different denominations and tolerances. Some may have tolerated gambling and others tolerated drinking. Even though I have carried out extensive research, none seems to have tolerated debauchery!

This is a very early photograph (taken before 1860) of my great, great, great maternal grandfather Robert Smith, he was the first deacon of Golcar Baptist Church in 1835. He doesn’t look like someone who would tolerate drinking, gambling and definitely not debauchery. I reckon nobody messed with Granddad Smith.

The reason that the people of Gowca made a more civilised impression on John Wesley may be thanks to the arrival of Protestant Huguenots, who had been persecuted by the Catholic establishment in their native France during the reign of Louis X1V. In 1685, they were forced to either convert to Catholicism or leave.

Many settled in England and Ireland and, as the Huguenots were skilled textile workers and lace makers, some found their way to Gowca and also brought with them their emblem of the lily, which is now associated with the village. In return, Golcar offered them safety and employment. It pains me to say this, but the French may have been more civilised than Huddersfield at that time; certainly, John Wesley seems to have thought so.