The war took a different turn for my father in 1943. He had served on the Scillonian for about a year, plying between Penzance and the Scilly Isles, but knew that if he wanted promotion and more pay, something dear to Dad’s heart, then he would have to ask for a transfer 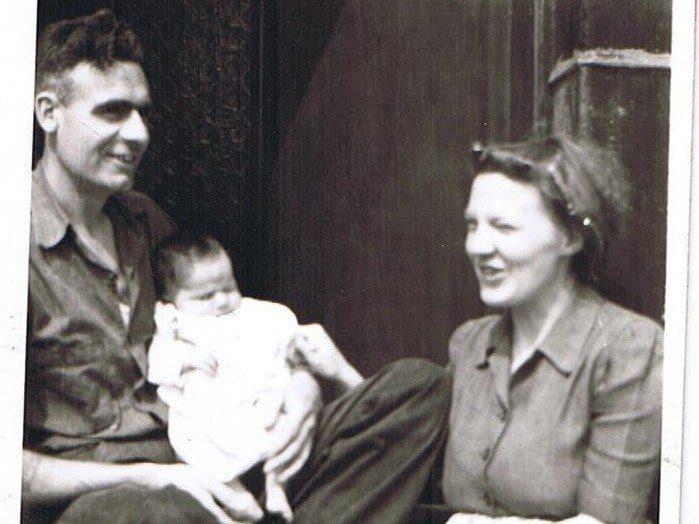 Baby Norky with his parents in 1947

The war took a different turn for my father in 1943. He had served on the Scillonian for about a year, plying between Penzance and the Scilly Isles, but knew that if he wanted promotion and more pay, something dear to Dad’s heart, then he would have to ask for a transfer. So he was posted to the merchant vessel Durham at Falmouth on 27 July, where he became acting petty officer.

The Durham was a 21-thousand-ton refrigerator ship, which plied between the British Isles and America, Australia, Tasmania and New Zealand, running the gauntlet of the U-boat menace. Despite the dangers, it was Dad’s favourite ship of the ones he served on. He made eight Atlantic and six Pacific crossings, mostly without convoy, as the Durham could raise about 17 knots and could outpace submarines.

Later in his life, Dad eventually told me about one incident that did involve a convoy, sailing from the southern United States to England in December 1943. They’d been warned about probable U-boat attacks. Travelling at the speed of the slowest vessel, this route should have taken approximately 18 to 21 days but because of the U-boat attacks, they were compelled to make avoiding manoeuvres and inconsequence the crossing took considerably longer. Over several nights, the crew saw many explosions on the horizon. They knew that this could be their fate at any second without warning. The convoy did in fact lose several ships during this crossing.

The German U-boat ‘happy times’ were their periods of great success, the first being mid-1940, to early 1941, their second being after Germany declared war on the USA (immediately after the USA declared war on Japan), when more targets became available in 1942. The U-boats continued to attack the convoys after this, but better British tactics and weapons technology, as found on the newer attack destroyers, meant that Germany’s happy times were over. Despite this, a great many more ships were sunk during the following months and years of WW2.

When eventually Dad’s ship made it to the English Channel unscathed, it was a dark, snowy late December. Dad was on watch at the time, when out of the darkness he saw a British destroyer steaming past, making the “whoop, whoop, whoop” sound that meant to Dad that all was well; the relief was so great that he burst into tears.

Dad signed on to his final ship on 24 July 1945, the SS Samkansa. She was an American liberty ship, welded, not riveted, one of the ‘Sam’ class. Quite a lot of these were sent to Britain from the USA under the Lend-Lease Act. The ship again sailed to Australia and New Zealand and later that year formed part of a huge convoy bound to invade Japan. When the convoy was in the middle of the Pacific, the Japanese surrendered, following the allied air attacks on Hiroshima and Nagasaki. The convoy instead sailed around the Pacific for two or three months. Dad was told that they were in search of water the Japanese military hadn’t polluted, but it was mainly due to the fact that it took a great deal of organising to disperse a convoy of that size.

Eventually the Samkansa arrived in England, but even after the war was over Dad was persuaded to sign on for a little longer, as his ship had been ordered to land the fifth Indian division on Surabaya in the Dutch West Indies and also to carry out time-consuming diplomatic missions to rescue local dignitaries and politicians. Consequently, Dad didn’t get home until the end of May 1946. When he finally made it home, he was wearing his brown, pinstripe demob suit that fitted where it touched. Mum subsequently had a suit made for herself out of it, the trousers becoming a skirt.

Mum and Dad used their own personal codes in letters and telegrams that he sent, that told her where he was and when to expect him home. “Dear Mary, My dearest Mary, Love Cliff, All my love Clifford”, etc all meant different times and places. In one letter that Mum received in late 1945, he had indicated that he would be home for Christmas, but December and January came and went with no sign of him. The code had worked faultlessly up to then. Even though WW2 was officially over Mum was convinced that Dad was a goner. Still she didn’t open any of the Christmas presents and kept the Christmas tree up, just in case. Then on a cold, dark, winter’s evening in late February 1946, going up to midnight, there was a knock at the door …

… It was inevitable that sooner or later a bundle of screaming joy would appear and so it came to pass that I was born during the summer of the following year.

Overall, Dad was comparatively lucky: his war was relatively uneventful as regards obvious imminent danger. For a royal navy seaman on merchant ships, work was routine, even boring at times. But on other occasions it was extremely frightening and the non-obvious imminent danger can work on the imagination in terrifying ways. As a result, Dad was a changed man when he returned from the war, hardened in many ways by his experiences. Having achieved the qualifications that enabled him to become a petty officer, he had become used to giving orders and having them carried out without question, an attitude that didn’t go down well at home sometimes. Many thousands of wives and families had to draw on fortitude and patience built up from their own wartime hardships and experiences, to ease returning service personnel with experiences like my dad’s back into civilian life.

In terms of showing his emotions, for much of his life, like many men of his and other generations before and since, Dad felt compelled to reveal very little. Consequently, I felt very privileged when in his sixties Dad began at last to open up in his telling of his wartime stories and admit that, even as the tough young man he then was, he had felt the extremes of fear. This softer, gentler, more open nature that he showed in his later years was, I think, more his true personality and it brought me much closer to him. We were able to become good friends until he died some ten years later.