Have you been following Norky's ramblings? This week he returns to his high school days in the Colne Valley and recounts some of his memories of teachers' so-called discipline. 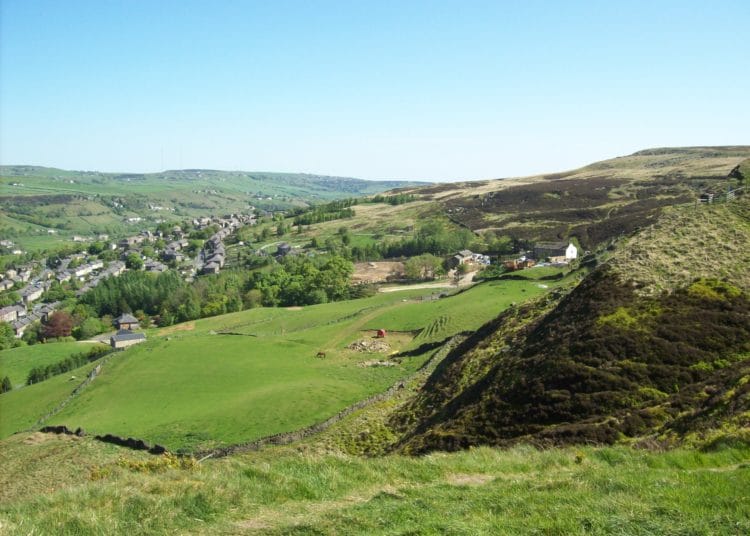 True stories from ‘Norky’ who comes from Scapegoat Hill, a small, isolated farming village, high on the Pennines in West Yorkshire. You can catch up on his ramblings so far HERE.

I started my four years at Colne Valley High School in the autumn term of 1958. My form teacher was Mr McConnell. On our first day we assembled in the dining room and there appeared to be hundreds of boys and girls just milling about. Our parents had received letters with information about uniform, times and dates – as well as form numbers and assembly points – but little else in the way of detail.

All the teachers were stood in the raised area of the dining room that I later discovered was where they took their meals so they could look down on and disapprove of the pupils’ eating habits. To be fair, it was a sensible idea for the teachers to be higher, so they could keep an eye on the potentially unruly mob below.

I scanned the line of teachers on that first day, hoping that I would be getting one of the happy, smiling, glad-to-be-there ones. There was a stocky chap with a gruff persona, who didn’t look happy to be there at all. I thought to myself “as long as it isn’t him”, and scanned the line several more times just to confirm my original hopes before saying again “as long as it isn’t him.” This of course was Mr McConnell.

The average age of my 36 class members was 11 years and six months when we started; I was 11 years and three months. My first term’s exam results were very poor: my best grade was C, and that was in woodwork. I achieved the giddy height of position 36 out of 36 and Mr McConnell’s remarks at the end of my report were, “Most unsatisfactory, Peter has not tried, and worse still, I feel, will not care that he is bottom”. This was probably a fair assessment.

Mr McConnel proved to be just as rough and tough as he looked. There was one lad who thought he could stand up to him. One day, Mr McConnel got him out in front of the class for some now-forgotten misdemeanour. What I do remember was that the lad had a cocky smirk on his face that gave the impression he was going to show everyone how rough and tough he was too.

To be fair, the lad was indeed rough and tough, but no child deserves what happened next. When he was bent over, Mr McConnell gave him a slap so hard on his rear that it sent the hapless lad scurrying into nearby shelving. When he finally stood up, the cocky smirk had disappeared to be replaced by a blubbering mess. I had never – nor have I ever – seen a child hit so hard. The lad never messed with Mr McConnel again.

On the whole, Colne Valley High School was much better for me than Golcar Church of England School had been. After scoring so badly on my first term’s exam results, I was moved to the ‘happily bewildered’ second-from-bottom class. Most of the teachers at high school had a little more humanity than those at my previous junior school, at least they seemed to try … even Mr McConnell was trying to drum some sense into us in his own way.

In the spring term I was placed with Mr Barker. He proved to be a ‘bible basher’, not because he had an over-enthusiastic religious calling, but because he would bash kids about the head with his bible. I was the recipient of this on more than one occasion. He would have me kneel down in front of the class and start bashing away to his heart’s content, describing the errors of my ways as he went along. It usually went as follows: “Norcliffe (bash) do (bash) you (bash) understand (bash)?” by which time I had no idea what he was trying to drill in to my tiny mind. Perhaps that’s what was required – not a bible but a drill?

On one memorable occasion his attack was so violent that the rest of the class protested. He gave up then and I never received another of Mr Barker’s bashings. I thought the class was very brave to stand up to the teacher like that, considerably more brave than Mr Barker anyway. He disappeared a little while later; he probably couldn’t find a bible big enough to make any difference with the ‘happily bewildered’.

Why did people like this enter the teaching profession? Perhaps they were constantly beaten by their own parents to force some sort of academic achievement … then they spent the rest of their lives taken it out on small humans who couldn’t fight back. Who knows.

It’s been a long time now and I don’t want to be accused of bearing a grudge, therefore if I ever meet my former teachers again I will warmly shake them by the throat … the scabby, miserable, ignorant, bullying b**tards!

Golcar and Colne Valley folk had a habit of giving people and places nicknames. Local villagers were (and are still) referred to as follows:

Gowca lilies (Golcar) –(my favourite) this name is likely to do with the lily being the emblem of the Protestant Huguenots who were persecuted in France. They were very skilled textile and lace makers and as such found their way to the north of England, and in this case Golcar.

Linfit leadboilers (Linthwaite) – apparently they had a habit of boiling lead there, for the manufacture of shot or weatherproofing presumably.

Slawit moonrakers (Slaithwaite) – the story goes that local smugglers hid their barrels of bounty in the canal and were discovered by the authorities while trying to rake it out again, so they pretended to be drunk and said they were trying to rake the moon out of the canal.

Marsdin cuckoos (Marsden) – a wall was built around a cuckoo’s nest to prevent the cuckoo from flying away and therefore extending the spring.

The house on Handle Street with many windows in rows was called ‘sheet a pins’. And local individuals acquired infamous nicknames too:

Bill-o-wigs – a gentleman who lived up at Scammonden in the 1920s and 1930s. He wore bright trousers and mothers used him as a threat for children’s bad behaviour. The mind boggles at what Bill-o-wigs had done to deserve this reputation. Perhaps it’s best not to think about it too much.

Jack-o-long doorsteps – fairly self-explanatory: Jack lived in a house with wide or long steps to his front door (pronounced ‘dooa’).

Jane-o-Bonnies: – a Golcar lady who famously on her first trip to the seaside sat up all night for fear of missing the wagonette, then slept through its departure; in other words, she missed the boat.

Mall Fush – a very old lady who was very withered and threatening; in the 1940s and 1950s children were scared of her and grownups were amused.

Ned-o-Jims – this was Granddad Holdsworth’s nickname, his first name being Edward (Ned) and his father’s being James (Jim); this was a common way of naming people by describing their family connections.

The next two expressions were used by my maternal Grandma Maggie Holdsworth, she would have picked them up as a child while living in Żagań, Germany (now Poland).

Galshing –to get very close to someone and shout at them.