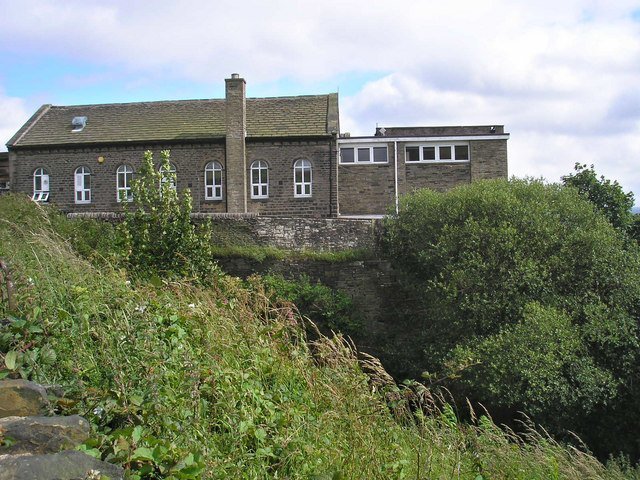 Over the next few weeks, Norky will share with us his memories of early life. You can catch up on his ramblings so far HERE.

My sister Rhondda recalls one of her most embarrassing incidents at school. Rhondda is five years older than me and we were both attending Clough Head School at the time. Rhondda left that school when she was eleven, therefore I must have been no older than six.

I don’t know what provoked the headmaster to do what he did, but he had both me and Rhondda stand in front of the full morning assembly and then asked me why I wasn’t as bright as my sister. Rhondda was mortified, probably embarrassed for me as much as herself. Admittedly, as a child and later in my youth I could do stupid things, but how could a well-educated and intelligent headmaster think this would help anybody, particularly a six-year-old child?

I don’t remember this incident, but Rhondda does, and in her 78th year, is still embarrassed by the memory.

At Golcar CofE School there was a Miss A Sourpuss (real name Miss Sinclair). She was quite young but taught from the same ‘give a psychological complex to as many children as possible’ school of teaching. One day she noticed that I didn’t show any workings out in the margins when doing my maths papers. Of course, Miss Sourpuss couldn’t understand that a child could be rubbish at English but comparatively good at maths.

I said “What Miss?” in a more-than-a-little-puzzled sort of way.

She then accused me of cheating and I was told to sit down.

Soon the yearly examinations were due, and when the maths problems exam papers were handed out, I was told to sit at the front. From a very early age I had no interest in pleasing these head cases by achieving any academic qualifications, therefore, I had no interest or reason to cheat. But Miss Sourpuss saw me counting on my fingers under the desk and assumed I was cheating. She couldn’t wait to pounce and tear up my exam paper. It suited me; I didn’t have to do any more work!

I still have that year’s examination results with a zero at the side of the maths test. My position in class for that subject was described as “not placed”. Of course, I also achieved 0/20 for spelling, but that wasn’t because I cheated, that was because by then I couldn’t spell. The best grade I achieved in the summer of 1957 was 17/20 for art.

There may have been good reasons for the crappy teaching at Golcar CofE School – one of which being that during the years I was there, the lowest number of children in my class was thirty-eight, and the highest number was fort two.

There were only two things that Golcar CofE School had that suited me: it was within walking distance of home, and it was where I met my eventual wife, the lovely Moira. I was ten years old; Moira was eight.

I loved her button nose. We played in the school recreation ground with mutual friends. The girls would chase the boys around until one was cornered. We would be reluctantly pinned to the ground and would then get a light-hearted slapping. I seem to remember that Moira’s best friend Christine liked to dish out the slapping quite a lot; I don’t think I have ever recovered.

I must have been into noses. I later went out with another girl for about three months – Christine’s older sister Maureen in fact. Maureen wasn’t into slapping anything like as much as her sister. This was before I discovered the error of my ways of course and started going out with Moi. Anyway, how or why I hadn’t noticed Maureen’s nose before that moment is a puzzle, for our respective families lived next door to each other in Golcar for about nine years. I only started going out with Maureen after we had left Golcar when my parents bought a fish and chip shop in Birkby in 1964/65. Funny how things work out sometimes.

Moi and I started ‘going out’ in 1965, instigated by our sisters Rhondda and Carol, who worked together. Rhondda needed me to babysit for her son Steven, and Carol suggested that she could ask Moi to keep me company as an incentive. It worked!