Peter Norcliffe dives into family history in this three-parter about his uncles who served in the Second World War. In this instalment, he discusses his Uncle Frank, who served in India. 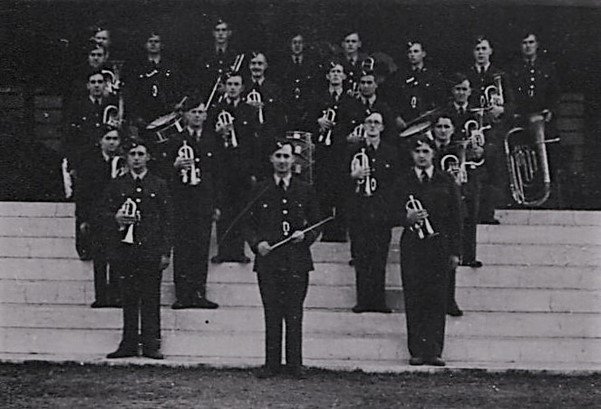 Uncle Frank was called up into the Royal Air Force quite late in the war. He was one of the ground crew on the Bristol Blenheim aircraft on the Acra Cantt, airbase in India. He worked on the airframe, which is everything except the engines. His war was fairly uneventful as regards imminent danger.

As he was the son of a choirmaster and organist (my grandfather Edward), Uncle Frank and his three sisters were all encouraged to take an interest in music. In his case he took up brass, playing cornet, horn and trombone. Not all at the same time of course. In this photo, he is at the back, second from right holding what looks like a baritone horn.

When I knew him, his main occupation was a chimney sweep. Chimney sweeps are supposed to give good luck and longevity to a marriage and he attended my wedding. It seems to have worked as Moi and I have just gone 54 years together. 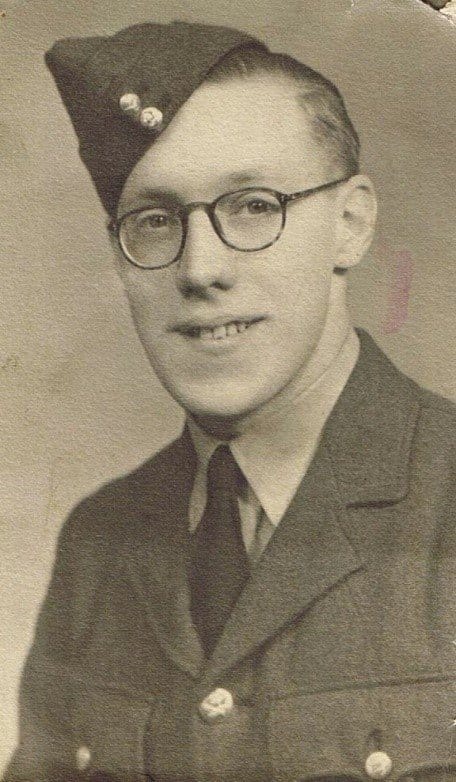 Uncle Frank played with the RAF bands throughout his military career, entertaining the troops at their many dances, concerts and parades, and he continued playing all his life. Following a Christmas concert playing trombone with Vintage Brass Huddersfield in mid-December1962 he said to his wife Barbara “Oh we did have a good concert tonight”, went to bed and never woke up. He was 61 years old when he died.

Uncle Frank and Aunty Barbara were the nicest couple one could ever wish to meet. The photo below was taken on their wedding day in 1947. The happy little bridesmaid on the right is my big sister Rhondda, I think even at that age, one can see someone who will happily knock seven bells out of some younger, pest of a brother to show him the error of his ways. 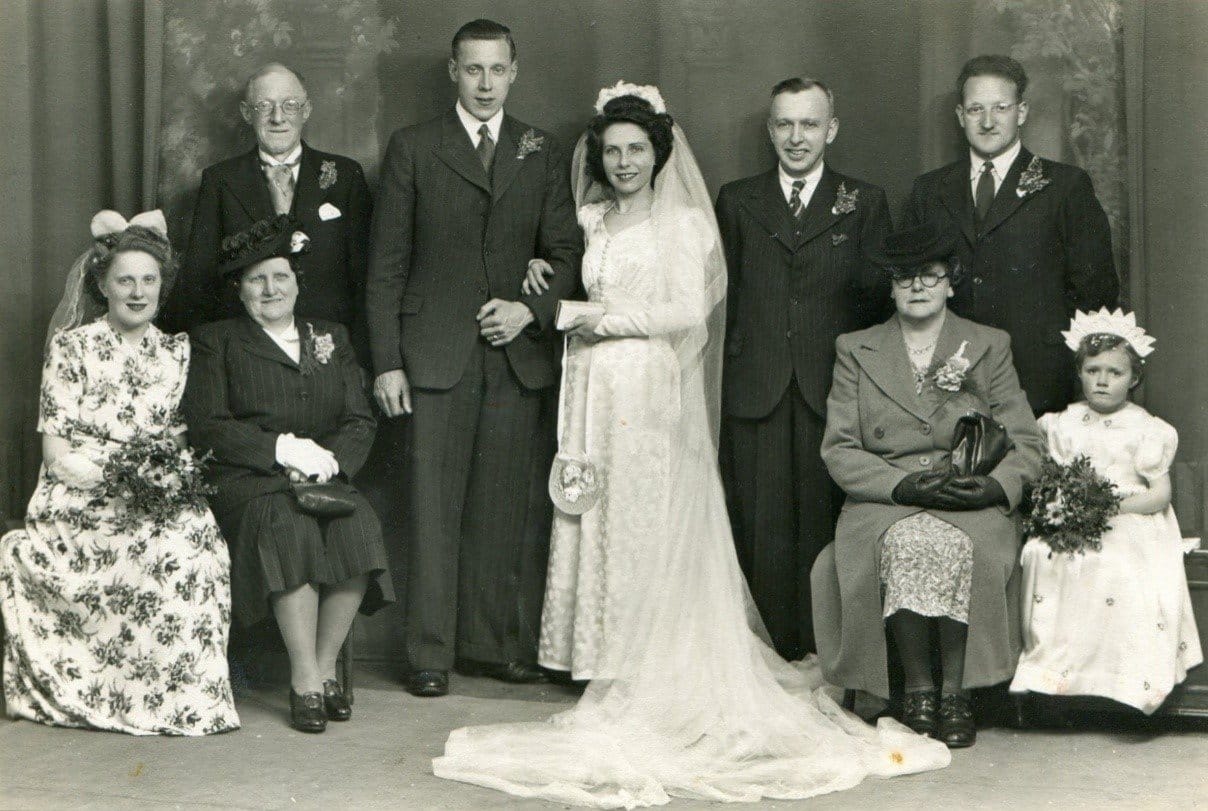 Strictly speaking, Margaret, even in a darkened room, cannot be described as an uncle. However, she is worthy of an honourable mention here as she was also called upon to do national service in 1944.

In 1941, the government expanded the existing national service, first introduced in this period in 1939, to include single women and childless widows between the ages of 20 and 30. Aunty Margaret was 20, in 1944 when called up. She worked in the engine-testing bay at the Rolls-Royce aero engine factory at Barnoldswick. The factory is still working on aero engines parts, but as of writing, there are now plans for re-structuring the business.

In 1944, Barnoldswick was proudly part of the West Riding of Yorkshire, but in 1974 the government, in their infinite wisdom, decided that it should now form part of Lancashire. As all people born and bred in God’s county will know, there are three ridings of Yorkshire: West Riding, East Riding and North Riding. However, fewer people know why there are only three. Riding is an old English word, with connections to Old Norse, and it means ‘a third part’. 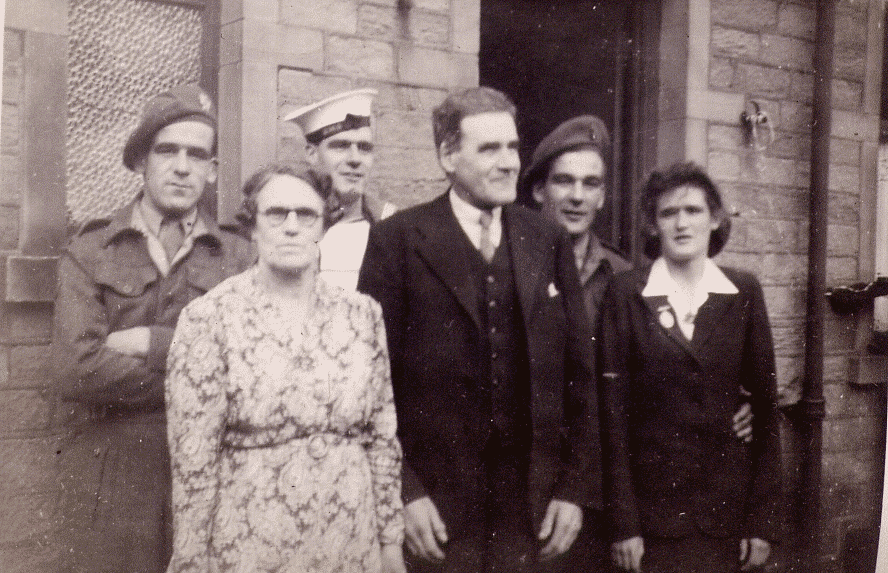 This photo was taken in 1944, and was the only time all four siblings who were doing their national or military service were home on leave at the same time. The badge that Margaret (on the right) is wearing in this photo has MN, her initials, on it in bold lettering. It is in fact a Merchant Navy badge that Dad acquired while serving in the Defence Equipped Merchant Ships.

Sadly, there is no photograph of all six siblings together. It wasn’t thought important at that time to include the eldest and the youngest brothers. Their youngest brother Trevor was too young for military service. And the eldest, Philip, was carrying out important civilian work, I think he may have been a body double for Queen Mary (King George V’s wife) to fool the enemy during her royal visits, but it was all very hush-hush. Uncle Philip worked as a civilian driver/chauffeur and inspector for Hanson’s coach company in Huddersfield. Uncle Philip died in 1966 at the age of 52. He had recently Married Carol, who was married, widowed and had a child all within that year. All Philip’s siblings who went to war outlived him by about 20 years, except Margaret who lived to a ripe old age of 89. She was oldest of the Norcliffes.

Incidentally, during the 1908 London summer Olympics, it was Queen Mary who was instrumental in standardising the length of the marathon.

It is said, that during the battle of Marathon in 490 BC, a young, fit chap called Pheidippides ran from Marathon to Athens, to announce the Greek victory over the Persians, a distance of about 25 miles. The three modern Olympic Games marathons ran before the 1908 London games were of varied length of around 24 to 26 miles. The 1908 London games marathon started at Windsor castle in full view of the royal family. The distance from Windsor Castle to the Olympic stadium was 26 miles, It has been suggested that Queen Mary, insisted/suggested that the race should finish in front of the royal box, thereby adding a further 385 yards.

Thus became the standard distance of 26 miles 385 yards. The Italian Dorando Pietri was first over the line, but as he had been helped back on his feet by the officials after collapsing several times during that 385 yards, he was disqualified and the American Johnny Hayes was declared the winner. Queen Mary subsequently presented Pietri with a gold cup. I should think so too.

I know it’s a very tenuous link between my family and the Marathon, but I felt the need to write something about it, and it may provoke a smile. And it is a ‘Norky’s ramble’ after all.