Peter Norcliffe dives into family history in this three-parter about his uncles who served in the Second World War. In this first instalment, he discusses his Uncle Harold, who served in what was then Burma. 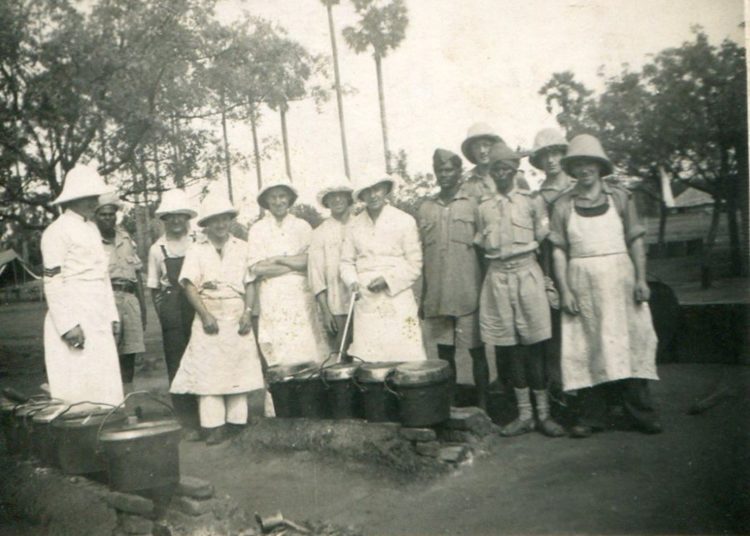 The army kitchen. No wonder Harold’s sergeant was taken away suffering from dysentery never to be seen again.

I spent a lot of time with Uncle Harold. He is the uncle I knew the longest; and I visited him regularly to reminisce, revive old songs and empty a bottle. Harold asked me to say a eulogy during his funeral. “Make it a bit mucky” he said with the glint in his eye, he often had when he thought he might ruffle a few feathers. He died In May 2012.

Uncle Harold was a very entertaining ‘life and soul’ character. He was great fun and often entertained family and friends with his songs, monologues and ‘mucky’ tales, one of which I was proud to revive at his funeral at Golcar Baptist Chapel. It was the one about a potion he had invented to guarantee pregnancy –it only costs £5, and if it didn’t work first time, he would do it again for nowt.

About 10 years ago, Uncle Harold, Aunty Zena and myself got together to record some of his childhood and wartime memories and songs he and Zena used to perform. Below are some of the extracts from that recording of Harold’s wartime experiences, typed out exactly as he spoke during the recording.

“My brother (Norman) joined the Duke of Wellingtons before the war and, of course, as soon as the war broke out it wasn’t long before they were sent over to France. And when the German big push came, like thousands of others, he was captured. He got killed right at the end of the war. There weren’t many weeks before it was all over. He kept escaping and they kept bringing him back. But he escaped once too many times and he got killed just three days before the end of the war, by our own aircraft, who didn’t know they were there, somewhere on the border of Poland.

“I was called up in 1940, we did 18 months in Ireland then we came back home for a few weeks. We were then sent on the SS Stirling Castle to Durban in Africa. There were a lot of Australian troops on board, going back home. They dropped our regiment off in Africa, and we were there five weeks. Then we went on an old tramp steamer, oh! You’ve never seen anything like it. When it were stood tied up at the dock people were being sick. It was a horrible boat. There was one lad ‘Happy Armitage’ from York, he never ate from getting on that boat until getting to India, he was so sick that he couldn’t be sick any more.

“We had to go to the galley up like a ladder out of the hold. It was an old tramp steamer; there was nothing modern about it. We had to climb up this ladder with your plate and mug, knife, folk and spoon, And then get back down again, with your food on the plate and it was tossing about, your dinner would float off. Waves were coming over the front of the boat, down where you slept. The bread was full of maggots. You’ve never seen anything like them; big, thick maggots. You pulled them out for a start, and then you thought ‘oh! Begger it’, and you ate them. And it was bread and fresh meat then. You can’t imagine what it was like on that boat. Nothing tasted right, because it were all awful food. There was a lot of us on it. There’d be over a thousand on it; with just this little galley.

“There was these big birds you know, Kite Hawks they called them, we called them ‘S**te Hawks’. If they couldn’t pinch your dinner they’d s**t on it. You had to get used to this. We had to carry our food, cup of tea in one hand, your dinner in the other. And we couldn’t do nothing about it, and they’d swoop down and take the best thing on your plate. They didn’t just pick anything, they’d take the best thing. And there were these vegetarian sausages. By! They were awful, we could have had a bucket full of these sausages when they were on because they were terrible things. We would have an egg, a slice of bread and these sausages. And them birds would come down, you know, and never took the sausage. They’d take your egg or your bread but never took your sausage, it were marvellous. This happened all the time in India.

“When we first got to India there was a big long row of toilets outside. There must have been 30 seats over each of these great big holes. If you were sat on these toilets, there would be somebody two or three holes further up, that when they had finished and banged the lid shut, my backside would be absolutely covered in flies, masses of these great big blow flies, you know. People don’t realise now what people had to put up with in those days.

“We had a sergeant there, a big strapping lad he was, and he got dysentery, and he went to the toilet 73 times in one day. They had to take him away and we never saw him again, whether he died or not, I don’t know.

“They then put us on a train to Trichinopoly, right at the bottom of India. It were a long way, on hard seats you know, no cushions on or anything like that. And every so often, you had to stop at a station, and they’d shove a great big block of ice half size of a fireplace, into every carriage door. And it would stop there until it melted away, to cool the carriages down you know. Because it was burning hot. But the scenery, you’ve never seen anything like it, wonderful. We got to Trichinopoly to this camp and it started raining, it got to two feet deep in just a few minutes and when it stopped, within half an hour it had all gone. You couldn’t imagine. I’ll never forget them toilets though.

“While we were in Burma they took our battalion to Akyab Ireland. Me and my mate Hildred were on guard one Christmas Eve. I had pinched a bottle of rum and a bottle of whisky from some officers. It was thick, proper rum. I wasn’t a big drinker but Hildred could drink a cup full at a time. It was just like treacle. And we were as fresh as lords on guard. White Horse whisky it was. But I’d always plenty of food, Nestles Milk and hard biscuits; we had gallons of that Nestles Milk. And I’d always had some blankets because it got very cold sometimes.

“When we were getting on top and driving the Japanese back. They didn’t take a lot of driving back at that point though, because they had run out of ammunition, extended their lines too far. I was still wagon driving, and the officers came round one day and said ‘right you, you, you and you with your wagon you’re on grave digging tomorrow’.

“When somebody had been killed they used to hastily bury them at the side of the road, put a stick in, or a piece of wood. These bodies had to be brought back by someone, as I was the driver, I didn’t do any digging.

“Conditions in that area meant that the bodies soon decomposed, therefore, we were digging bones up, put them in blankets and take them back to a cemetery for a proper burial. OH! and some of these lads doing the digging, there was one, an office lad, he were pale normally, having worked in an office, but he had never even seen a dead cat before, OH! I did feel sorry for him; the smell and looks of things didn’t bother me with being involved with animals, dead animals and killing animals.

“Eventually the officers asked for volunteers and things were a little better then. The volunteers were more or less like me, they didn’t bother about it. We had to dig these bones out, lay the blanket out and put the head, arms, legs etc. on the blanket and then wrap it up. It was a callous way we carried on, you couldn’t have done it if you’d have felt any feeling for what you were doing. We would laugh about it. Volunteers were more or less like me, they didn’t bother about it. I remember one day, we used to take sandwiches with us and water, and it come to lunch time, sergeant said ‘right time to knock off for your lunch’ most of the bodies had been there for quite some time. They started decaying the minute you died out there. This particular body hadn’t been buried all that long and bones still had some rotting flesh on them. And this Scots lad that was digging this up when it came to dinner time, and he had been getting hold of the bones and wiping the flesh off with his hands, and then putting the bones on this blanket, he did no more than wipe his hands on the blanket an ate his sandwiches, I’ll never forget that.

“To celebrate victories elsewhere we were given one bottle of beer on D-Day. Then, on VJ day we got another bottle of beer. That’s all we got.

“I wouldn’t have missed it though. I’ve heard people bragging about not going, but they don’t know what they’ve missed. I had lived in Golcar all my life. We didn’t travel in them days. If they had said to me you had to make your own way to Leeds, I wouldn’t have known which way to have gone.”

Uncle Harold wasn’t particularly complimentary about the Australian and the US soldiers. Both were undisciplined in different ways he said. The Australians were a rough, hard-nosed lot with little respect for their officers. The US soldiers would not wait for orders; they would decide that they had to do something and as a consequence would occasionally bomb and shell their own allies.