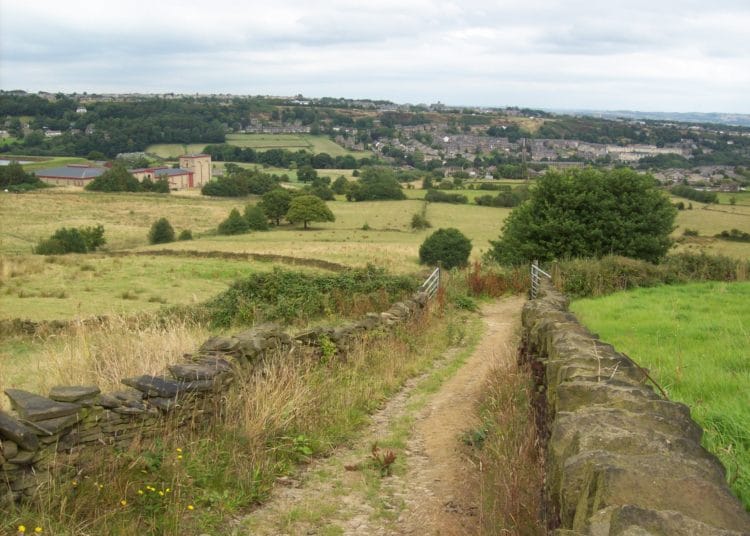 Over the next few weeks, he will share with us his memories of early life.

I was born at St. Luke’s maternity hospital, Huddersfield, at 5am on the 21 June 1947. Dawn on mid-summer solstice. This apparently means that I have some sort of sway with mermaids, griffins, unicorns and virgin maidens, three of which I know to be mythical (and I’m not sure about unicorns either).

I lived with my parents, Clifford and Mary and elder sister Rhondda (note this is the correct spelling) at Scapegoat Hill, a small, isolated farming village, high on the Pennies. On the whole I was a happy child unless food wasn’t there on time, which has covered much of my life really: “happy if fed, gratified and left alone”.

I had the normal childhood ailments for the time and being a boisterous physical lad I got into the normal scrapes. I endured many minor injuries, several of which, I seem to remember were from the hands of my big sister, Rhondda!

I was a very slow learner and attended schools that favoured ridicule as a teaching method. We were quickly segregated into rows of potential achievement. The Brylcreem boys – with clean shirts, polished shoes, ties and a handkerchief – sat by the window. Then the second row were almost as bright, they also had polished shoes and combed hair. The third row were scruffy and a little stupid, yet were retrievable.

And then came my row, which had the dribblers. These had crinkly white hair and birthdays in March and were often named Bahahahabra or Baaarry. Me and a lad called Nobby were the only two in that row who stood upright. This whole row were basically ignored by the teaching staff, other than the occasional ridicule. As a consequence, and because I was lazy, I achieved nothing at school. I think I can guarantee that I am the most academically uneducated person in any room I now find myself in.

Over the last 30 years or so, I have been inspired by the likes of the nonfiction author Bill Bryson, who writes books that I often returned to for information or a good laugh. I can now string a sentence together, albeit with rubbishy grammar and punctuation. Three cheers for Mr Bryson and a spell checker; long may they continue. I would happily say that Bill Bryson’s book called “A Short History of Almost Everything” is my favourite book.

There was one kid in my row at junior school called Ian, who had an unenviable and fascinating skill. He could snook a couple of inches of snot back up his nose just before it broke its hold of his upper lip. None of us in the fourth row had handkerchiefs (hankies). Ian needed to perform this special trick every two or three minutes and it seemed to be a permanent facial feature. It was disgusting but I couldn’t take my eyes away. A skill to be admired. My snot would never have that sort of strength to hold itself together. I knew no one else who could produce anything like the amount of snot that Ian could.

On one occasion, our headmaster stood in for our absent regular teacher. To give him a tiny, tiny bit of credit, he was perhaps trying to give me a chance of promotion into the redemption row, number three. We were having a spelling test.

He pointed at Susan on the second row and asked her to spell cat.

Then he pointed at Douglas at the window row and asked him to spell dog.

“Very good boy”, said the headmaster. Then he pointed at me, who was wistfully looking into space and said, “Norcliffe, spell because”.

I think he was having a laugh. However if anyone remembers the headmaster at Golcar Church School in the late fifties, they would, I am sure, confirm that he didn’t have a laugh in him, not even a private one. He was more likely to stick pins into childlike dolls if you ask me. Anyway, there I was trying to spell ‘because’ and I came out with something like “b-e-c-o-s, sir”.

Of course Mr. Sadisticbs’tard encouraged laughter from the rest of the class, and told everyone to, “spell ‘because’ for Norcliffe”. Half the class didn’t know how to spell it either but were shouting something and hoping that Sadisticb’stard wouldn’t notice. The inbred dribblers and two heads were already reciting, “three blind mice”. Mr. Sadisticb’stard could hear the correct spelling as he already knew what to listen for. I did not and therefore I could not. This went on for some time until Sadisticb’stard got fed up and stuck another pin into his doll.

I never did get it at school, it was well into my adult years before it finally twigged. Every time I use this word now, I remember that teacher. His real name was Mr. Hardwick. School was such a joy for me.

One of many puzzling things in my life has been why the scientists and sociologists studying the causes of bad reading come up with the name ‘dyslexia’. It is a word that the sufferers would have no chance of spelling. Perhaps they should have called it ‘because-lessness syndrome’.

I have always found the written word quite alien. I would feel that I was trying to suck individual letters from the page and they were not going to lose their grip on the paper without a fight. Even though I had a steady hand and I was capable of intricate and delicate work, my handwriting would look like I had used an ink-soaked stick tied to my elbow. The older I get the more comfortable it is becoming, but I don’t think it will ever become easy.