Norky's ramble this week describes his time participating in a choir, attending competitions and meeting people. 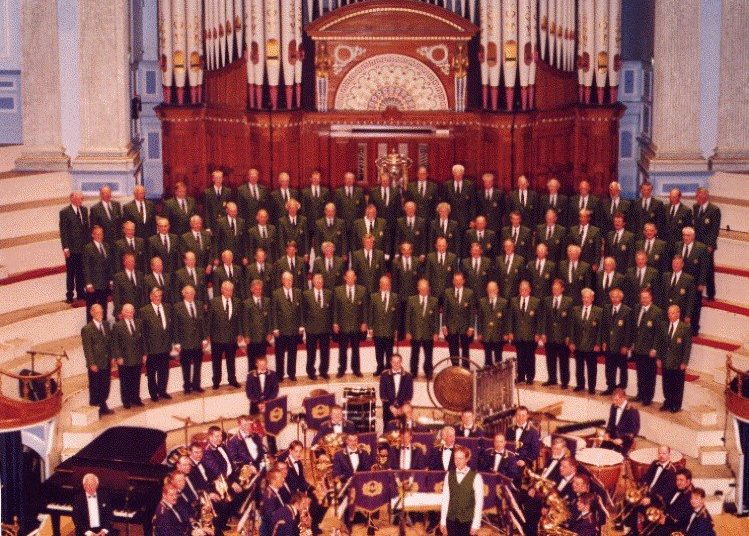 Singing was very popular in our local churches, chapels and schools. Mum had always been very musical. She joined her Knowl Bank school choir when she was eight years old.

Mum’s dad, Edward, was an amateur choirmaster and organist for two Golcar chapels. Mum’s first memory of music was while walking down a country lane with her dad and he broke into singing Wagner’s “Hail Bright Abode”. He had a wonderful bass voice. In 1930/31, Mum’s Knowl Bank school choir competed in the school choir section at the very prestigious Llangollen Eisteddfod competition and won.

My grandfather also encouraged me to sing – solos for family gatherings – as he had with his own children when they were young. At primary school, I joined (was press-ganged) into the Golcar Church school choir. We competed in the Huddersfield Mrs Sunderland competition in 1958 and came sixth out of 12. We were very pleased with our modest position, as we were the only junior school competing.

I did nothing with any music talent that I may, or may not, have inherited for a few years, until sometime around 1959, when my brother-in-law John gave me an acoustic guitar. To begin with, I just jammed with friends and played for an occasional more organised singsong and birthday parties. Then eventually, along with the aforementioned John, we instigated the re-birth of the band Antique Gold.

My choir commitment began again in 1990, when an old work colleague, Albert Collins, persuaded me to join Gledholt male voice choir. Albert was one of the world’s lovely fellas. He was an ex-scum half for Keighley Rugby League, and he was also my first rugby league coach.

Gledholt Choir were very welcoming, all very friendly. I have, or at least had, a natural baritone voice, but as I could reach bottom D and could manage two-and-a-bit octaves, from bottom D to top F – an acceptable bass range – I was placed in the bass section alongside David Porter.

David became my mentor and even though we have both moved on he continues to be a very good friend.

We left Gledholt and then both joined the Colne Valley male voice choir, which was a much better choir, with many fantastic singers. The choirmaster, Thom Meredith, and the accompanist, Keith Swallow, are very accomplished musicians and second to none.

Colne Valley MVC has always been a competition choir, competing in and winning many, including the Llangollen Eisteddfod six times. If the pressure wasn’t enough already, in the 1999 competition, Thom had us standing with voice parts mixed up, such that we could only stand next to one other in our own section.

Luckily my mate David and I sang together which helped me stay in tune, as David is an excellent harmoniser. If singing mixed doesn’t teach harmonising nothing will.

The following year, 1999, was yet another highlight, as we sang in Rouen Cathedral and mass at Reims Cathedral, the mass being sung in French. The only unfortunate coincidence of this tour was that we were staying in a hotel in Rouen for a few nights, including 30 May. To the uninitiated – and I was one, as were the tour organisers – this was the the place and date of the execution of Joan of Arc. We did wonder for a while why we weren’t too popular.

Just to show off, we also sang Pilgrim’s Chorus in German that year. All our singing was performed without music on stage; Thom liked to keep our minds boiling over.

I joined several full and sub committees, one of which was the Yorkshire Cancer Research Festival Committee. This was initially to organise the 1,000 Yorkshire male voices event, which took place every four years at the Albert Hall. During the run-up to the 2003 concert, it was decided to invite ladies’ choirs also. I was asked to be stage manager, and I foolishly agreed, not knowing what I was in for. (As David has often said “If you want a volunteer, ask a busy man”).

Eventually I had to find 1,500 choir places, all demanding that they sit within their section. Therefore, I had to ascertain how many from eight sections, each of the 20 choirs were sending, add them up and section off within the Albert Hall stage maps, the number of seats I required and where.

Luckily, I was provided with several maps by Mo, the Albert Hall’s very helpful manager. Sid, the committee chairman was determined to sell every ticket and every space.

Each meeting he would tell me he had sold more tickets and eventually the audience seating encroached onto the seats I had been allocated for the choirs. This happened four times and each time I had to rearrange the choir seating on the map, meticulously colouring each group of seats for each section.

During the Friday before the concert in our hotel bed, I woke up in the night in a cold sweat, knowing I hadn’t enough seats. Luckily Mo came to the rescue again, and during the morning rehearsal her staff scoured every corner of the building and found seats in the repair shop or used by the maintenance staff until I had just enough, with not one to spare.

The audience had been pushed in from the sides, and so the choir was squashed in and down into the space that the two brass bands were occupying. These were in turn pushed further forward until the knees of the band were almost touching the knees of the audience. One chap on the front row said to me that the slide from the trombone player was flashing past his ear hole! An exaggeration of course, but it can’t have been far from the truth.

For all of that, we all had a great time. As happened on many occasions after a concert, the choirs would find a bar somewhere and start singing again. In this case many bars!

Before the start of the concert, I found myself backstage in the wrong place at the wrong time. As I was the only one in the festival office at that moment wearing a black tie and dress suit, I was asked to announce arrangements for a section of the audience after the concert.

It isn’t a very good photo, but this is me speaking to five thousand people in the Albert Hall just before the two bands took the stage.

Everybody was so thrilled to be there that I received rapturous applause for announcing coach pickup points. On leaving the stage, Norman, the soloist and fellow committee member said, “Bloody hell Peter, it’ll be a bugger if my applause isn’t as good as that”. It was of course… just.

Some Yorkshire humour to finish with:

A Yorkshire man visits the vet’s.

The vet asks “It’s a tom I assume”

While my wife Moi was working in medical admin, A patient rang to ask for an appointment. The surgery receptionist asked her for a brief description of the condition and the patient said, “I’ve got this eer itchin’”. The receptionist quite understandably wrote down in the appointment book “Itching ear”.

When the doctor eventually saw the patient, it turned out the itching was in another part of the body entirely. I suspect they were both surprised when she dropped her drawers and the doctor took out his otoscope.