Norky recalls his most embarrassing moment, which occurred during a German exchange visit in 1955. 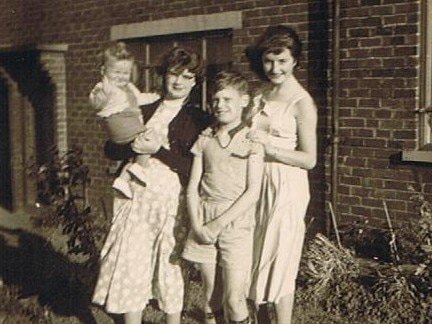 Norky with his brother and sister, and Christa, from Heidelberg

The young lady on the right in the picture above is Christa. She is from Heidelberg, Germany, and is fully responsible for kick-starting my puberty. This photo was taken in 1957 when I was ten years old. My sister Rhondda is holding our little brother Nick (he always was cute, and got away with everything his big brother never could, and continues to do so).

Rhondda attended Royds Hall Grammar School, and the governing body of that school thought it would be a good idea to start a pen-friend arrangement with pupils from a German school to build friendship and respect with our recent adversary. This was 12 years after WW2. Rhondda and Christa were put together and eventually the two schools arranged reciprocal visits. Royds Hall School visited Germany and a few weeks later Christa and her school friends visited England, each pupil being billeted with their respective pen-friend.

I thought Christa was lovely. She had an exotic foreign accent and the way she said Peter gave me a little tingle. Rhondda has said that Christa was my first love, so it must have been obvious even then.

This photo, including Mum and Dad this time, was also taken outside our home in Golcar. You can see that Christa has her hands on me again; I wonder if she knew what effect she was having. In both photos, I’m trying desperately to camouflage my embarrassment. Smart socks though, I’m sure you will agree.

One incident of adolescent embarrassment during that visit goes down as the most embarrassing moment in my life, and it didn’t involve Christa personally at all. During their two-week visit, we met many of the other German pupils, some with exotic German names like Kurt, Juergen and Ernst. Towards the end of their visit, arrangements were made to gather many of the two groups in our house to watch a play on television. I don’t remember which channel it was broadcast on, because since 1955 we had two, yes two, British Broadcasting Corporation (BBC) and Independent Television (ITV).

The play was set during WW2 and was obviously meant to form part of their education, and to better understand the development of the two cultures following WW2. I’m sure following what I’m about to describe, they must have learnt something. I’m embarrassed about it even now, I can hardly bring myself to put it down in writing, perhaps doing so will after 63 years lay it down to rest.

We were all crammed into our posh front room, even carrying out the ceremonial opening of the front door as a way of welcome (no one ever used front door in those days). I was placed on the floor right at the front. The play was introduced with all the necessary ritual and observances, then it started.

The very first image on screen was a swastika.

I immediately grabbed my imaginary Tommy gun (favourite among boys) and while pointing it at the screen I rattled off a few rounds while shouting “ah Jerrys” and made the duff, duff, duff, duff, duff, duff sound that all boys know is the Tommy gun sound. I was quickly reminded who was in the room by a swift kick in the back. I stopped shooting before inflicting any fatal injuries, but at that point I hoped the ground would open up and swallow me whole. I was right at the front surrounded by everybody, so I had to sit there and endure the rest of the play, which seemed to take a month. I think because I was unable to escape made the feeling build to such a degree that I have never been able to shake off the embarrassment to this day.

Full diplomatic relations were not restored until Harold Wilson, then prime minister and fellow Huddersfield lad, was able to convince Helmut Schmidt the German chancellor how stupid some fellow Huddersfield lads can be. However, nobody has thought it prudent to taken the extra step and send me a letter of forgiveness.

I like Germany and the German people a lot. My wife and I have toured through and into Germany many times on our motor bike. A German commander is in fact one of my heroes. He was the captain of the German battle cruiser Admiral Graf Spee. These German fighting ships were later described as “Pocket battleships”. Captain Hans Langsdorff chose to scuttle his ship after the battle of the River Plate rather than fight his way out to sea from Montevideo harbour with the needless killing of more sailors . He then wrapped himself in his beloved German flag and shot himself.

There is a photograph of him attending the funeral in Montevideo of his ship’s crew killed during the battle. He is shown saluting in the traditional military fashion, while many around him, including the clergy are using the fascist sieg heil salute. It is believed that he, and many existing “old school” military leaders, were not fans of the Nazi regime. He was an honourable gentleman and hero in my mind, a lesson I had yet to learn when Christa entered my heart.

Left to right – This is a model of the Admiral Graf Spee, I think it is a beautiful ship, one of many modals I have constructed over the years. They have been almost exclusively WW2 military models, my very first one being the Lancaster Bomber that my big sis and her then boyfriend, now husband John bought me on Christmas 1959. This was two years after the Tommy gun incident, so I think she must have forgiven me. Me again with another model of the Lancaster Bomber in 2010.