At the heart of Away With Words is Jim Higo, the Bard of Bransholme, whose firecracker wit is at the heart of the most vibrant poetry scene in the North. 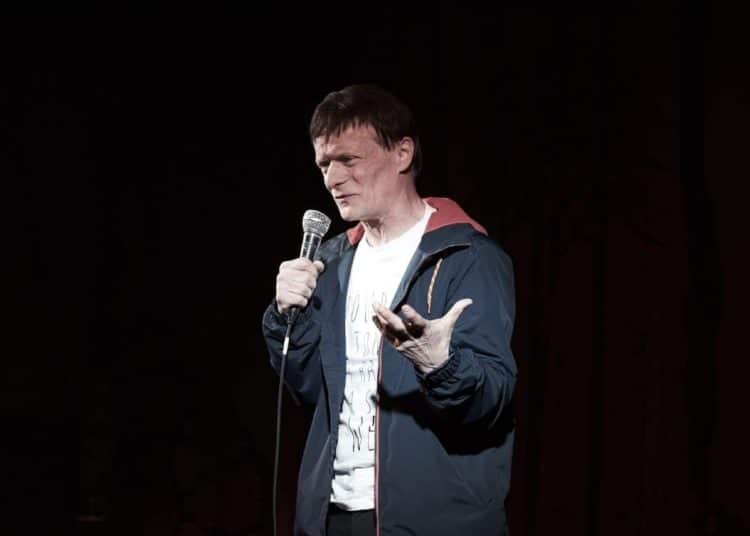 Jim Higo, founder of Away With Words

There’s a lot to be said for raffles. In these times where arts funding has become national news, a poetry night that is in its tenth year, which has been funded by nothing grander than the humble tombola, is something to be celebrated.

At the heart of Away With Words is Jim Higo, the Bard of Bransholme, whose firecracker wit is at the heart of the most vibrant poetry scene in the North. Even in lockdown, the monthly online events are well-attended and always lively. We asked him how he got started:

I started out as an actor and drifted into the spoken word scene almost accidentally. I did a one-man show I Can’t Stand Up for Falling Down and was doing bits of stand-up comedy. I did some poems in the act and stumbled across the existing scene in Hull. To begin with I just did poems as part of my comedy act, but gradually I developed a fully formed stand-alone spoken word set.

Via a series of unrelated occurrences I ended up organising a spoken word stage at The Vista Festival and being asked by Dave Stead from the Beautiful South to run a regular night at his venue Union Mash Up. I was reluctant to do it as I only wanted to perform but was persuaded by the promise of beer and cash, neither of which materialised.

Nine years later we are still going. We moved Away With Words to Off the Road – Live Lounge two years ago and since then we have been just an open mic night although we will be returning to having a featured guest from out of town next year.

You’ve survived and thrived despite zero funding: Why do you think AWW has survived whilst other better-funded things have come and gone?

My intention was always for AWW to be independent, self-supporting and free to attend. This has enabled us to function free from the sort of restrictions, demands and associated anxieties that come with having to rely on external funding. In the last decade, several funded shows have emerged onto the scene especially during Hull’s year as City of Culture in 2017. Every one of them fizzled out once funding and audience interest disappeared, leaving behind nothing in the way of legacy or enduring value.

So why do you do it?

AWW has no great purpose or mission statement beyond providing a platform for local writers to share their work and have a voice. This has meant we have created an environment that satisfies the needs of all poets from the novice to the professional. Our events are free and we have funded the appearance of out of town guests by holding a raffle on the night of the show to pay their fee. We have survived by making our events inclusive, informal, supportive and non-judgmental. This has enabled us to build a community of poets, writers and performers with a shared loyalty, affection and close affiliation for the night.

What is it about Hull that makes poetry nights there so special?

There are a lot of things about Hull that seem to go unnoticed outside the City and I think perhaps that’s something of a blessing. Our geographical isolation demands that we have a self-sufficiency and survival instinct that outsiders often perceive as insular but that we consider to be nothing more than minding our own business. If necessity is the mother of invention then decades of limited funding for the arts in the region has meant the locals have learned to be creative and resourceful and adopt a do it yourself attitude. This has seen events, shows and festivals occurring that have a unique personality and distinctiveness. A desire to be heard, a need to have a voice, a rebellious streak, an obstinate refusal to be defeated all play a part in a vibrant arts scene at grass roots and street level that provides a welcome antidote to the bland predictability of the subsidised literary festival circuit. This is Hull we just get on with it here.

What’s next for you and AWW?

I’m looking forward to getting back out on the road to promote my book “Sussed” which has been held in abeyance following lockdown. I also have a new one man play which I hope to perform early into 2021, so I’m desperate to get back in front of an audience. In the short term we are looking at running some open-air events at various places in the City until we are able to return to our current venue in reasonable numbers. Next year we will return to running shows with special guests in addition to the regular open mic nights. We’re currently discussing with BBC local radio about the possibility of collaborating on a regular spoken word show and we are also looking to do a spoken word festival across a number of venues in 2021 as well as collaborating with One Hat TV to do a live stream magazine format show including poetry, music, sport, interviews and special features. We’ve developed a close relationship with Scunthorpe spoken word night “Speak Out Scunny” and we will be looking at arranging joint events to build on this association and looking to run workshops and writing groups at our home venue Off the Road Live Lounge.

Raffles have a proud history. Frank Sidebottom’s entire merchandising stall was a raffle where the prize was Little Frank. The early Christian church drew lots to see who was to replace Judas Iscariot. Macneice and Elliot both wrote lyrically of tombolas. Out on the edge of England, Jim Higo’s resilient and inventive work in performing and promoting poetry supports a community of artists who really don’t care whether you like them or not.

The best art is always that way out, as we say in these parts.