So, if I cannot roller skate around the park then I will navigate this new lockdown with my tiny army by my side. I shall continue to gaze longingly at my skates whilst I paint away my lockdown blues … with a fabulous shade of Warhammer Blue! 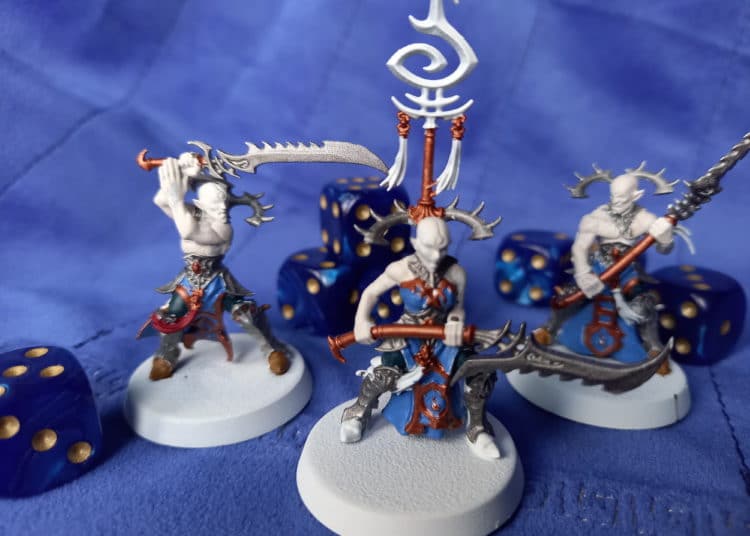 With the last sparkle of tinsel disappearing into boxes in the roof, how are we to keep our spirits up?

The weather has been so miserable that I have had to park my roller skates on a shelf. Although, the mere sight of them sparks joy, a promise of better days to come. Before I know it, I will be risking dignity and injury in my local park once more!

In the meantime, I’ve taken up a new hobby. My son has been involved in this activity for several years and during the first lockdown it transpired that even Henry Cavill was a fan. Checkout his Instagram to see him honing his craft. In case you’re wondering – my new hobby is Warhammer. If it is good enough for the Man Of Steel, then it is good enough for me.

Initially, I’ll admit I was  reluctant to get involved. But with hours and hours of time now resting heavily upon my hands, it was a possible distraction. As I said, my son has been dabbling with it for a few years and my experience of Warhammer was limited to my annoyance as whole armies of miniature soldiers started performing manoeuvers all over the worktops in my kitchen. These tiny figures would linger on every surface, seemingly too fragile to be just swept into the usual pile of clutter that I designated (optimistically) for the same child to take upstairs to his room. My son viewed each model with a mystical reverence. He spends hours assembling and painstakingly painting the tiny beings. Over the years his collection has expanded to include many different creaturesand when he eventually manages to corral them into his room, they live on multiple shelves, all grouped according to their military loyalties.

But where was I to begin? I didn’t want to spend a lot of money and let’s face it, some of these models can be pretty pricey. So, I just needed a few soldiers to get started. My son provided a few of his spares. My first painting efforts were clumsy. Up close, those tiny figures are packed with detail. They have tool belts and boots with buckles, all waiting to be picked out with a steady hand and an exceedingly fine brush. But I wasn’t satisfied with these lone warriors … I yearned for an army of my own. I searched the Games Workshop (creators of all things Warhammer) catalogue for a group of creatures that I felt represented me.

My feminist principles required that not only did my army comprise a fair percentage of female fighters, but that these females were properly dressed. I have no interest in creating an army of women who would be going into battle dressed only in bikinis! I settled on a new collection called Idoneth Deepkin. It was the giant warrior turtle that really caught my eye. After all, what could possibly be more majestic than ‘swimming’ across the battlefield on the back of a titanic turtle or a savage shark?

My starter set included foot soldiers (blind warriors with swords), cavalry (enormous eels) and a low-level wizard (to harvest the souls of the fallen) and it all looked daunting. My favourite part of construction and painting, and the reason that I keep returning, is the fact that I share the entire process with my teenage son. Teenagers can be strange creatures, yet here we found a common ground. The table would be cleared to make room for our miniature militia, the paints and brushes would be lined up, the music choice settling on a mutually agreeable 1980’s classic rock playlist. Several hours would pass this way, companionably conversing as we worked.

The real beauty here is that there is no pressure for completion. In a world that is constantly striving to get things finished and immediately start something new, here was a project that has no deadline. The ultimate goal of course, is to have a magnificently painted army. In fact, there are many Instagram posts dedicated to just this subject. Yet, having an unpainted army does in no way impede your ability to actually play the game. The actual painting of your figures seems to cater to a personal desire to create something uniquely yours.

The game itself, of actually taking your models into battle with another army, is a complicated matter. Learning even the basic rules for Warhammer battling has taken an enormous amount of dedication on my part. The obstacle that makes it most challenging is also one of the main reasons why Warhammer is so special: the intricate backstories that accompany each army are incredible. Each individual army has a guide, which is an entire book dedicated to their particular histories. It describes their strengths and weaknesses in the style of an epic historical record. All of which is accompanied by striking illustrations. It is this extravagant mythology that makes the entire game so compelling.

It is also worth mentioning that there is no such thing as a quick Warhammer battle. Whole evenings have disappeared as my son and I battled it out across our kitchen table.

Yet, I am happy to report that I am not the only one to have been seduced by this new craft. Over the last few months, Games Workshop has gone from strength to strength. Online sales have catered for the increased need for home-based entertainment and they have released a whole new range of figures over the past six months alone. My local Warhammer stockist (and expert) – Mark Milnes of Mirfield Miniatures at the Creative Arts Hub – has experienced an unprecedented amount of interest in what was previously considered to be something of a niche hobby. It would seem that whilst many existing fans of the game are taking the opportunity to build up and paint their armies, there has also been a significant amount of interest from newcomers.

In pre-lockdown days, Mirfield Miniatures enjoyed weekly Warhammer battle sessions, where players could bring their own armies and pit them against others. Several large tables with atmospheric scenery added scale and drama to every battle. These events offered an opportunity for the more seasoned players to offer encouragement and assistance to new players.

Mark Milnes was happy to share his insights into Warhammer’s enduring appeal.

“The creative aspects of the hobby, and the solitary nature of some of those activities, are perfect during lockdown – particularly when linked to the need to share the fruits of your labours in playing the game itself. For us at the Creative Centre Hub, the synergy with our existing creative activities couldn’t be more perfect, and I daresay that the gaming has proven to be a natural successor to the exhibitions and art workshops which have seen a serious downturn in the last year.”

He was also delighted to report that sales are up, despite the lockdown.

Mark was keen to let me know that whole families have been getting involved in painting models together and submitting them to some of the Facebook competitions he has organised. For those wanting to have a go, there is a bustling trade in pre-owned figures that have been stripped of their paint, all ready for you to customise. These are much cheaper than brand new figures.

So, if I cannot roller skate around the park then I will navigate this new lockdown with my tiny army by my side. I shall continue to gaze longingly at my skates whilst I paint away my lockdown blues … with a fabulous shade of Warhammer Blue!