Flipping ‘eck – it’s Pancake Day today, so let’s use ingredients such as sugar, fat and eggs before the beginning of Lent and 40 days of fasting leading to Easter. Well, that’s the tradition, which goes back for centuries. 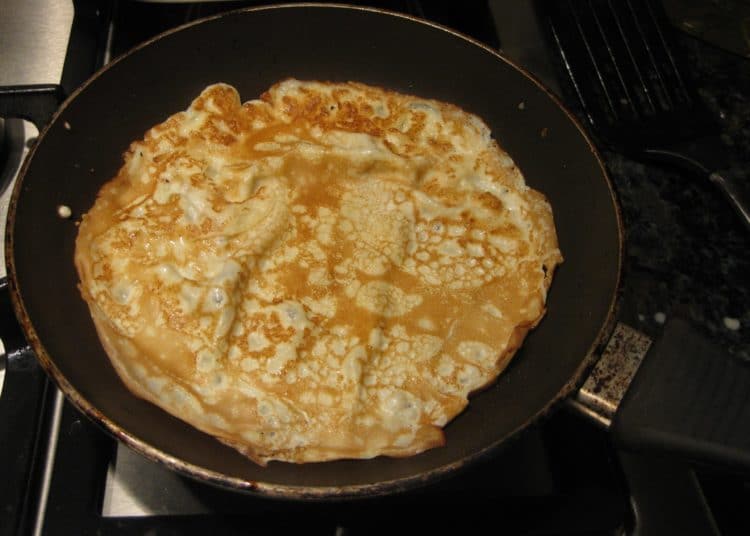 Photo provided by the author

Flipping ‘eck – it’s Pancake Day today, so let’s use ingredients such as sugar, fat and eggs before the beginning of Lent and 40 days of fasting leading to Easter. Well, that’s the tradition, which goes back for centuries.

Allegedly, pancakes were made with a type of wheat during the Stone Age. Some researchers say that Otzi the Iceman was eating pancakes which were like flatbreads. Most historians agree that the Ancient Greeks and Romans ate pancakes and sweetened them with honey. The Romans made them with milk, flour, egg and spices and called them ‘Alita Dolcia’, which translates from Latin as ‘another sweet’.

The Elizabethans ate them flavoured with spices, rosewater, sherry and apples on Shrove Tuesday. This name for the day comes from the Anglo Saxon ‘shriven’, which means absolved from sin.

In more recent times, pancake races have become popular such as ‘The Olney Pancake Race’, which dates back more than 500 years. The course is 415 yards (380m) long and is run from the market place to the church. Participants – housewives or young ladies of the town – must have lived in Olney for at least three months and be at least 18 years old. Sadly, this year, the race has had to be cancelled, with covid restrictions making it not viable to run.

In the meantime, we can still make and enjoy Grandma Abson’s perfect pancakes.

What you need and how to bake

Melted butter or oil for frying

Sift the flour into a bowl. Make a well in the centre and break in the eggs. Add ½ of the milk and beat until you have a smooth batter. Add the rest of the milk gradually and beat until well mixed. Let it rest for 30 minutes. Heat the butter/oil in the frying pan until hot. Pour enough of the batter in to cover the base of the pan. Cook each side in turn.

I’ve been looking through some of Grandma Abson’s old newspaper cuttings from 1910 and found a whole range of pancake recipes where the authors were sent prizes for their recipes. Here are a few of them:

“Two breakfastcupfuls of flour, two breakfastcupfuls of milk, one ounce of butter (melted), two eggs, one good teaspoonful of carbonate of soda, sugar, lard, half a teaspoonful of salt. Mix the flour, milk, eggs and salt to a smooth batter and let stand for one hour and half, and then add the melted butter and the carbonate of soda, previously dissolved in a little hot water. Fry the pancakes in hot lard until a golden brown, sprinkle with castor sugar and serve.”

Miss Tennant of London won a tin of tea for this recipe.

“Three ounces of sugar, four ounces of grated chocolate, four ounces of flour, half a pint of milk, two eggs. Mix the chocolate smoothly with cold milk, boil the rest and pour onto it. Return to the pan and stir till smooth, add the sugar and let it cool. Whisk the eggs well, stir into the flour, add the chocolate and let the batter stand till cold. Then fry in fat, sprinkle with sugar, roll up and serve hot.”

Miss Gregg of Liverpool won a dainty stationery blotter for this recipe.

“1½ oz butter, 2oz flour, 2oz sugar, 2 eggs. Grease well with butter four large saucers. Place the butter in a basin and beat it to a cream, add the sugar then by degrees the flour, and mix all together thoroughly. Beat the eggs until very light in a separate basin. Then add to the other ingredients lightly and quickly. Half fill the saucers with the mixture and place them in a quick oven and bake for twenty minutes. When ready, turn them out of the sauces, fold them together and if desired, place a little jam or sugar in each.”

Miss Nicholl of Tayport won a silver enamel pendant for this recipe.

If you fancy a more substantial meal with pancakes, check out a great French recipe for savoury pancakes from my friend Francoise, called Ficelles Picardes. They’re made with cheese, ham and mushrooms. Delicieux!

Have fun flipping on Pancake Day!

Read more about Grandma Abson’s life, her passion for baking and recipes on www.grandmaabson.com and head over to Instagram @potsaway to check out how Meryl and Patrick are cooking together again.

Not just about university: Erasmus+ and the lost opportunities for young people