Brian McHugh asks if now is the time to be expanding the Leeds-Bradford airport: "Net zero emissions needs to be changed to zero emissions. The time is coming for an ethical and legal re-think on fossil fuel expansion plans. No longer can we continue to build for a fossil fuel reliant future." 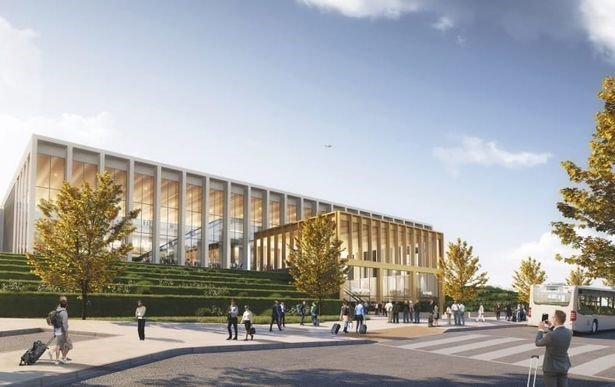 Plans for the expansion of Leeds Bradford Airport (LBA) costing £150m, by building a new terminal, were approved last week by Leeds City Council in a majority 9:4 decision. Airport bosses submitted the application to replace the current building to help boost passenger numbers from four to seven million annually, with the new terminal building opening in 2023.

Their application states the current terminal, which was built in the 1960s, is “extremely inefficient” and passengers are frustrated about congestion in the narrow building, small food and drink areas, and inadequate baggage handling facilities.

According to the plans, the new 27,774 square metre terminal will be slightly smaller than the current terminal, but will include “a spacious departure lounge with well laid out retail and food and beverage zones and appropriate seating areas and lounges”.

Also planned is a £42m rail interchange station, between Horsforth Station and Bramhope tunnel, though the consultation for this closed on Sunday in what appears to be unseemly haste. The station, which would be called Leeds Bradford Airport Parkway, would be a bus interchange for the airport. It would also include a 350-space park and ride service.

The economic argument: who stands to gain?

It’s far from certain how Leeds will benefit economically from this airport expansion. It seems unclear how the local residents of Yeadon are going to profit from the expansion, or indeed how the volume of traffic on the roads is going to affect congestion locally with the extra three million visitors. The hope surely is that all these visitors will spend time in Leeds city centre and boost the economy there.

However, Dr Whiteing, a senior lecturer at the University of Leeds Institute for Transport Studies warns, “The economic growth arguments don’t stack up very well in my view. It’s not in the business market – it’s in the package holiday and city break market”.

Over the last 30 years, the UK transport sector has reduced its CO2 emissions by less than 5 percent.

‘Net zero’ is a carefully crafted term and arguably allows for companies to continue to emit carbon emissions at high levels, while pledging to compensate elsewhere. The aviation industry follows this ‘greenwashing’ messaging, by taking a paradoxical position of zero carbon targets but developing growth.

According to the Aviation Environment Federation, “Offsetting in aviation involves either paying for an emissions reduction in some other economic sector to compensate for the emissions from a flight, or paying for enough trees to be planted to absorb an equivalent amount of CO2. But neither of these approaches provide a long-term solution for aviation given the need to get to net zero emissions in the coming decades … it won’t be possible to keep planting (and protecting) enough trees annually to absorb continually accumulating CO2 from fossil fuel use”.

Leeds City Council declared a climate emergency in 2019. Cllr David Blackburn points out that these decisions on national airports should really be taken from a national perspective, “Otherwise we could reject expansion but some other airport could go and expand!” While Cllr Finnigan maintains that, “If we don’t take this economic opportunity, someone else will”.

On the other hand, Cllr Walshaw stresses, “The first order concern for this application is the climate emergency. Everything else pales in comparison. We have a solemn duty to think about the future of the people of Leeds, and I’ll be voting against this application to expand the airport”.

“The approval of the expansion of Leeds Bradford Airport (subject to conditions) is a major set-back for Leeds’ ambition to reach net zero by 2030. To get even close to that target we now need to ramp up the delivery of all other low carbon commitments across the city.”

The expansion of LBA, increases in flying and declines in other emissions means that the ‘share’ of the city-wide carbon footprint from flying gets bigger and bigger over time. But we’re not all equal when it comes to flying: the richest 40 percent take 61 percent of all flights, while 48 percent of people don’t fly in any one year.

On 19 February, the Group for Action on Leeds Bradford Airport (GALBA) wrote to Robert Jenrick, the secretary of state for housing, communities and local government, asking him to “call in” the decision on LBA. They have also issued a petition against the expansion and intend to challenge the decision on legal grounds.

If Jenrick agrees, the airport’s planning application will be dealt with at a public inquiry. GALBA believes that LBA expansion is the aviation equivalent of the Cumbria coal mine case. GALBA says there are striking similarities: a local authority decision – made in the same year that the UK hosts climate change conference COP26 – which would result in significantly increased greenhouse gas emissions and contradicts the latest advice to government from the Committee on Climate Change.

Chris Foren, chair of GALBA, said: “To say the least, this decision is embarrassing for the UK’s reputation as a global leader on tackling the climate crisis”.

“There are cogent reasons to say that the conditional approval of Leeds Bradford Airport expansion should be called in by the secretary of state.

“The serious climate change impact of the proposal, which is totally out of line with the Climate Change Committee’s guidance on how to reach net zero, means the development would have significant effects beyond its immediate location.

“Granting permission would commit the UK to greenhouse gas emissions that would contribute to a surge in emissions in the early 2030s; would make the 2050 target much more difficult and costly to achieve and would require reductions in airport capacity elsewhere in the UK”.

With the expansion of Charles De Gaulle airport being scrapped last week for not meeting environmental goals and road expansion plans in the UK in doubt over a lack of the consideration of the environmental impact, it now appears that environmental views are taking precedence over economic ones. It is notable that the Heathrow runway expansion still remains far from being finished, despite the block being overturned on appeal.

This year, with the UK hosting the COP26 and having declared a climate emergency, it remains to be seen what the government will do to demonstrate that it’s willing to take drastic action to meet its own emission targets.