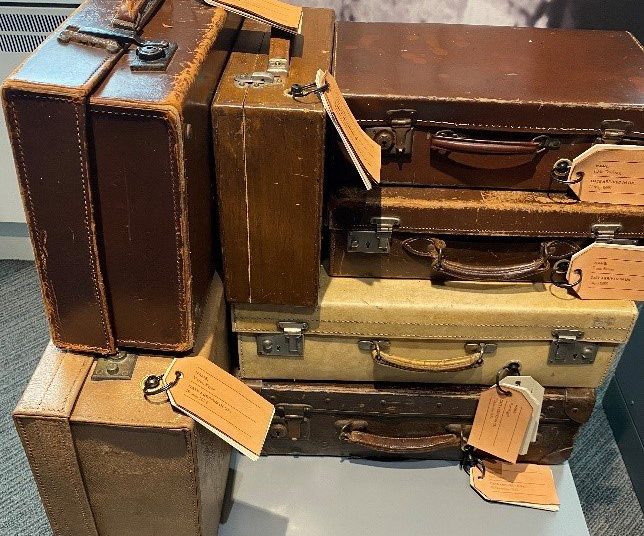 In 2018, the excellent Holocaust Exhibition and Learning Centre opened on the University of Huddersfield campus, right in the heart of Yorkshire. Many people – whether in Yorkshire or further afield – are not yet aware of this powerful resource, which is of particular interest to historians and educators. It’s worth taking a look.

Lockdown curtailed the activities of the centre to some extent, though some were able to continue online. Now that restrictions have eased they’re fully open once again, with some fabulous resources to offer both for teaching from Key Stage 2 (from rising eight onwards) and for students of all ages studying the history/sociology of the Holocaust.

This is a dedicated Yorkshire-based project. It came about after a local group of Holocaust survivors decided that, in pursuit of recording their experience before it disappeared from living memory, they should put together a schools information project, visiting local schools to tell their stories.

Holocaust survivors in the group were aged between four and teenage during World War II. They have now recorded a variety of testimonies about escaping the Nazis in occupied countries and finally settling in Yorkshire shortly before, during and following the war.

For my own research, I was particularly interested in the two survivors who had experience of the Kindertransport, an initiative conceived by a group of charities to transport children to other nations where they would be safe.

But the centre’s resource bank contains a wide range of experiences narrated by the survivors, now safely captured on high-quality video, and carefully catalogued for teachers to use in flexible ways to bring history alive for their pupils.

Raising awareness of the Holocaust through personal stories

The survivors make the point that they are telling their stories to try to raise awareness, to prevent such tragedies happening again. I watched many of their evocative films while doing my research, and was poignantly reminded of them recently, while viewing news footage of desperate Afghani parents passing their children to British and American troops, beseeching them to take them to a place where they would be free to live without fear.

These are stories that will continue to haunt us, even more so as we continue to demonstrate how we have failed to learn the lessons of history.

Iby Knill, who fled to Hungary to escape Nazi-occupied Czechoslovakia, but was later deported to Auschwitz-Birkenau, says that it is important to teach children the danger of creating societies where people are intolerant of cultural differences, and where those in government have absolute power.

Rudi Leavor, whose family fled Berlin due to the rising antisemitism, and eventually settled in Bradford, says that it is important that young people understand how conditions in Germany after the First World War led to the opportunistic space in which Hitler and his henchmen placed themselves. He stresses the importance of being able to trace how roads to such atrocities are created: “It created a spark in a haystack.”

Eugene Black was born in a small town in Czechoslovakia. In 1944, Eugene and his family were imprisoned in a ghetto before being deported to Auschwitz-Birkenau. He explains that he was unable to speak of his ordeal until 1997, when he began to fear that the firsthand stories of Nazi atrocities might be lost. He says, “we must be able to agree to disagree. Tolerance is most important. We are all only here for such a short time; we must learn to live peacefully together”.

Understanding the history of the Holocaust

Several of the survivors make the point that it is important that children realise that the Nazis did not just persecute Jews, but all who were culturally different, or would challenge them in some way.

While six million Jews were exterminated, so was another cohort of six million, who were seen as ‘not compatible’ with the Nazi vision racially, sexually, ideologically, or neurologically. This included Roma and Sinti people, Slavs, people with special educational needs, Communists, and a broad spectrum of people seen by the Nazis as ‘sexual deviants’.

The centre is currently open to the public between 10am and 5pm on Tuesdays and Wednesdays and will be moving to four days a week (Monday to Thursday) from 20 September.

Visits from schools can take place across the week, by mutual agreement. The engaging and interactive learning programme at the centre uses the survivors’ stories to educate about the history of the Holocaust. A subsidy is available for state school travel costs.

Children can tour the centre in a number of different ways. Each of these emphasises the survivors’ individual and personal experiences, the ways in which they experienced their identity at different stages of their journeys, the artefacts that they brought with them to remind them of who they were and where they had lived (some of which have been donated to the centre), and most of all, their recorded testimony.

There’s also a wealth of online material that teachers all over the world can draw on, free of charge, to use in their lessons.

Because the centre is within the Huddersfield University grounds rather than fronting onto a street, many people in Yorkshire are not yet aware that it’s there. This is a great shame, as it’s a fantastic resource for anyone of any age wanting to learn more about the huge significance of the Holocaust for world history, sociology and politics, and the lessons that humankind must learn from it. I highly recommend it, both as a teacher, and as a historian.

A fish starts to rot from the head, just like the UK