How Seacroft’s Shopping Forecast is helping locals get their daily bread. 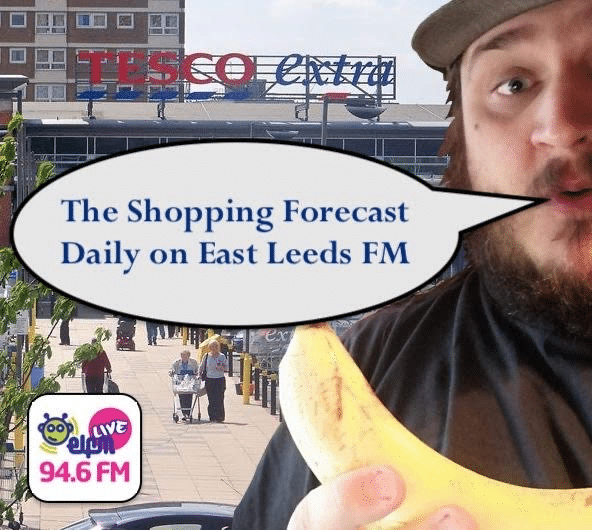 Tesco Extra has plenty of everything today. Except flour. How do we know this? Because every day, Elliott Moon from East Leeds FM’s Keeping a Distance, Staying Close programme asks locals to text and phone in while they’re shopping. In fact, the other day, one of the presenters rang him whilst he himself was pushing a trolley down the aisles.

“I didn’t have enough hands,” he laughs. “I had one on the trolley, one on my phone and I needed to reach for some pasta when they were asking if there was any toilet roll.”

ELFM, which in more normal times is an online station based at Chapel FM Arts Centre on Seacroft Green, wanted to reach people at risk of isolation during lockdown who wouldn’t normally access their output. Principally, this meant older people who would reach for a radio rather than a smartphone.

So, they lobbied OFCOM for a temporary licence, garnering close to a thousand signatures overnight as they sought to bring targeted local messages during this unprecedented crisis. The authorities are normally wary about such things, fearful, particularly in London, of encouraging pirate operations who might spread misinformation, such as the recent 5G stories that prompted damage to essential transmitters.

It says much of the reputation ELFM had earned for both high quality community programming and media training and outreach to local schools that OFCOM rushed through the licence in just two weeks.

Broadcasting throughout the week with their flagship live daily show, Keeping a Distance, Staying Together running from 10am to 1pm, their output has been described as being like a local version of Radio 4. It’s talk-based interspersed with comedy, stories and poems as well as music from local artists. However, its unique selling point is Elliott Moon’s The Shopping Forecast.

Every morning he puts out a call on social media to get people to either call in or engage online about the local retail picture, be it the bread situation at Lidl in Garforth or the length of the queue at Farmfoods on York Road. Station Co-Manager Tony Macaluso explains:

“We’re lucky to have some amazing and dedicated correspondents who venture out into the local supermarkets as well as the little local shops, to provide information about the supply of bogroll, flour for breadmaking, bananas and other essentials. Elliott scopes the aisles with the eye of a red kite while Linda Sage, who joins the queues at 7am, has a great knack for getting to know her fellow shoppers.

“We felt that it was key that we offer lots of super local information with a warm, personal touch … things people couldn’t find elsewhere in the media or online. Our radio tech Phil Driscoll and his mate Trevor Learoyd put forward the idea of naming our daily shopping field report after the legendary BBC Shipping Forecast.”

And what is the picture in East Leeds? According to Elliott, “as time’s gone on, it’s getting safer, as is the stock situation. People are complying, especially in shops and, if anything, they’re giving people too much space in queues.”

And the flour? Where’s it all gone?

“No-one knows. One woman I met in the queue at Tesco reckoned young people were using it to make snow-angels!”

In the current climate, who knows? One thing is certain though: If anyone’s going to find the answer, it’s Elliott and the team at ELFM.

Tune in online at Chapel FM or 94.6 FM in West Yorkshire. The full schedule can be found HERE.