TToday is Vaisakhi, Sikhism’s most important festival. Vaisakhi is celebrated to great fanfare within the Yorkshire community. 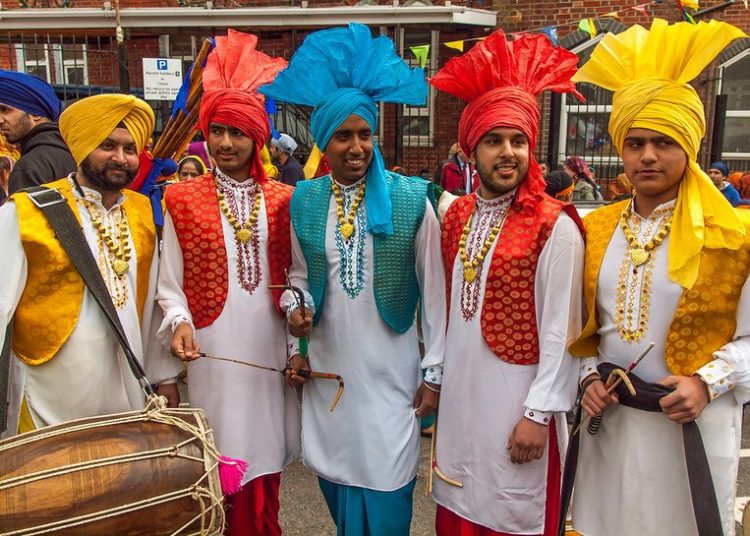 "Sikh Dhol Drummers in marvellous costumes taking part in the 2013 Vaisakhi festival parade in Southampton" by Anguskirk is licensed under CC BY-NC-ND 2.0

Today is Vaisakhi, Sikhism’s most important festival. It celebrates the formal anniversary of the establishment of the Sikh order, the ‘Khalsa,’ in 1699. For hundreds of years before this, Vaisakhi marked the harvest festival in Punjab. Communities would congregate to pray for a bountiful harvest and celebrate the year that passed. Now it is the focal point for celebration for all Sikhs throughout the world.

Vaisakhi 2021 in Yorkshire and around the world

Vaisakhi is celebrated to great fanfare within the Yorkshire community. There are often large parades with thousands of attendees across Bradford, Leeds and Huddersfield for example. These processions, titled ‘Nagar Kirtan’, bring together members of the Sikh community chanting hymns and reciting scriptures through the streets. It’s a day of colour (typically blue and orange), music, dancing and singing.

During these large processions, the Sikh communities invite people of all faiths and cultures to participate and celebrate with them in the large fanfare. Tents are set up at regular intervals to serve homemade Punjabi delicacies, all with exotic, vibrant smells – with all food distributed free of charge and for all to enjoy.

Everyone is encouraged to dress in traditional bright and colourful Punjabi clothing – the women wearing ‘Punjabi suits’ and the men wearing ‘kurtas’. People of the Sikh faith are loud and immensely proud of the community and religion.

This year’s celebrations, whilst muted, will still be carried out in union across the world. Many will be unable to make it to their local Gurdwaras, despite the recent lockdown restrictions easing, so prayers will be conducted through a virtual medium. One of the reflections will be for those who have been devastated as a result of the pandemic.

Sikhism began with Guru Nanak Dev Ji (1469–1539), but was formalised by Guru Gobind Singh Ji, the tenth Sikh Guru, on 14 April 1699 in a great baptismal ceremony. He did this to protect the teachings and philosophy of the Sikh faith, which was under siege by the Mogul Empire. At the same time, he announced the integration of the spiritual and political domains

This is what Vaisakhi commemorates. On this, the most auspicious of days for Sikhs, Guru Gobind Singh Ji baptised the first five men into the Sikh order. These five men represented the embodiment of the ‘holiest of the holy’ and were from different castes and social order of the day. They were to be known as the Panj Pyare, meaning five beloved ones.

The order established five unique articles of faith to distinguish all Sikhs, and instilled equality amongst all men and women. All men were to adopt “Singh”, which means lion in Sanskrit, and “Kaur” meaning Princess for all women – a note in enhancing oneness within a bound community irrespective of status or wealth.

The five articles of faith, or 5Ks – Kara (bracelet), Kachera (shorts), Kanga (comb), Kirpan (sword) and Kesh (hair) – embodied a unique identity that allowed the community to stand out whilst highlighting powerful symbols.

Sikhism had grown under the previous 10 Guru leaders – in the 200 years prior to Vaisakhi – with increased expectations, responsibilities and traditions. It bound and unified communities, whilst serving and nurturing surrounding communities and the spiritual development of its members.

This development, otherwise recognised as ethical cultivation, aimed to instil both discipline and respect to achieve the core three principles within Sikhism. They are “Naam Japna” (meditating on God’s name), Kirat Karna (earn an honest living) and Vand Shakhna (sharing fruits of labour with others) – all of which enrich the human spirit within.

The formalisation of Sikhism, integrating the spiritual and political domains, took place during a time of tension between the majority Hindu subjects and the Moghul Empire. By creating a centralised form of discipline, practice and identity, Guru Gobind Singh Ji formed a community pillared on justice, equality and empowerment.

This gave strength to the weak and poor, who suffered great pain and injustice under the Moghul rule.

Celebrating Vaisakhi as a community, as one, epitomises the ethos established by Guru Gobind Singh Ji when he formed the Khalsa panth. The values of community, celebration and progress are at the forefront of the collective consciousness, as Sikhs gather to mark the occasion.

Vaisakhi is also observed by Hindus and marks the beginning of the solar New Year and harvest festival.

Marking the anniversary of a massacre

In 1919, upward of 1,000 Sikhs (men, women and children) were massacred in Jallianwala Bagh, Amritsar. They had been celebrating Vaisakhi and peacefully protesting against the unfair powers of search, arrest and detention without warrant or trial in Punjab after the Great War. It is now 102 years since the unlawful execution order, given by Acting Brigadier-General Dyer and enacted by the British Indian Army.

The last year has also been a time of mass global protests – voices unified for freedom and equality in the face of discrimination. As we celebrate Vaisakhi today, let’s remember the victims of the Jallianwala Bagh massacre too.

Jagjit attended Ermysted’s Grammar School in Skipton and then studied chemical engineering at the University of Birmingham. He now works for Associated British Foods. Jagjit is a keen sports enthusiast with a particular interest in football, rugby and cricket. In his spare time, he enjoys cooking, exploring (hiking), reading history and socialising.