Ann Hurst was Wakefield's most powerful business woman who owned a book- store, tea room and chemist. As owner of the radical Wakefield and Halifax Journal, she was able to educate her readers about the horrors of slavery and directly influenced the outcome of the 1832 election which put Wakefield's first Liberal MP, Daniel Gaskell in Parliament on the Abolitionist platform. 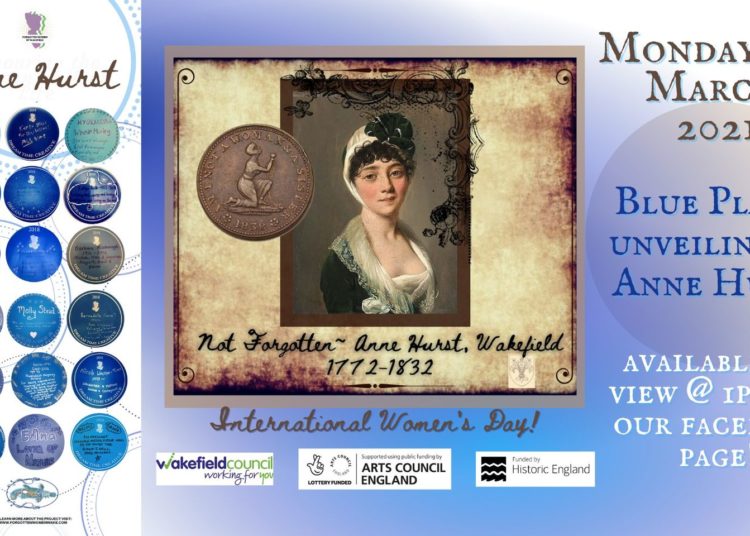 It’s almost a cliché to say women are invisible but when you look around public buildings named after them, they are easily out-numbered by men. There is a campaign to make the women history forgets more visible: Wakefield’s #blueplaqueparity.

Dream Time Creative’s Forgotten Women of Wakefield campaign for #blueplaqueparity aims to honour as many women as there are men on blue plaques for their contribution to the social, political, cultural, economic and creative landscape of Wakefield. We tell their stories through creative community engagement including, drama, writing, spoken word, art, crafts, theatre crafting and film.

Since we first began in 2018, we have named 19 women on blue plaques, now with Ann Hurst being the 14th in this particular series. Men are named on just over 30 blue plaques, and even more are named on plaques dedicated to buildings but only four acknowledge women. We have a long way to go.

The vision for #blueplaqueparity sees us working in partnership with The Wakefield Civic Society, wand we are convinced that parity is achievable by 2028, 100 years after all women got the vote. This will be good for our city and the cultural renaissance all around us … no more so than in Upper Westgate where Dream Time Creative is based, at West Gate Studios.

One particular visionary woman of Westgate, Ann Hurst, shaped the political history of our fair city, and we are telling her story as part of the Upper Heritage Action Zone project, funded by Wakefield Council for which we are very grateful. The Upper Westgate Heritage Action Zone is a four-year partnership between Historic England and Wakefield Council. This scheme will help boost tourism, culture and heritage to deliver much needed growth following recent disruptions to the local economy from the Covid-19 pandemic. The project builds on our city’s impressive cultural reputation.

Parallel funding for our ‘Am I not a Woman and A Sister’ project, has come from the Arts Council. This enables us to explore, more deeply, issues around black women and slavery, and to preserve the stories of three key women in a film called ‘The Abolitionists’. This funding facilitated our work with a diverse set of writers and artists to create the re-imagined 1825 newspaper front page we believe Ann Hurst may have printed when she nailed her colours to the mast and launched an alternative publication, ‘In Truth & Soberness’. This was dedicated to women’s role in the anti-slavery movement here in Wakefield.

By the time her husband, Rowland Hurst, died in 1823, Ann was already established at the heart of Westgate as a bookseller, stationer, patent-medicine vender and tea dealer. She sold tinctures and herbal medicines, no doubt handed down through the female line, from her bookshop to offer relief for those unable to afford the prices of private doctors.

Her self-printed books and pamphlets spread information in support of the abolitionist and suffragist causes and let people know where the next meeting, the next protest and the next discussion group was being held. Whilst Wakefield folk were buying their tea, Ann was able to link them to the literary society, the artists’ community and dissenters in the town, and to the Westgate Unitarian Chapel, already a hub for revolution. So the seeds of political change had been sewn way before Wakefield voted Liberal MP Daniel Gaskell in on the abolitionist platform in 1832. That change began with Ann.

Once Ann inherited the keys to the printing press of the Wakefield & Halifax Journal, she quickly used her extensive network to disseminate her radical liberal anti-slavery and suffrage vision through the various papers across the north that she had established, owned and ran. Aided by fellow Unitarian editors, Naylor and Johnstone, she was relentless in her efforts to persuade the (male) electorate to move away from the Tory right to the Liberal left.

Ann’s name has been found and praised in press around the British Isles for the promotion of the abolitionist cause as Dream Time Creative’s lead researcher, Helga Fox, discovered. Less than a year after becoming the owner of the Wakefield & Halifax Journal, she raised a petition to be sent to parliament. Ann actively raised funds for the poor of the town who needed help from Wakefield’s first hospital, The House of Recovery. It had been set up and run by women, and also promoted the need for a Wakefield dispensary, once again putting the suffering, inequality and exploitation facing the poor, front and centre.

In 1830, Ann directly influenced the hearts and minds of Wakefield. She stood at the forefront of the movement when, using her considerable social and political influence, intellect, and ability to act, she printed a leaflet calling people to attend an ‘abolition of colonial slavery’ meeting at the courthouse.

No women were listed on the leaflet, despite their integral role in the movement. Perhaps William Wilberforce’s direct actions had been heeded, blocking support for the ‘fairer sex’ and his vocal disdain of women’s role in the anti-slavery movement. Ann, however, clearly had other ideas. She was there under the name of Hurst, which was assumed, until now, to refer to her husband, Rowland Hurst. The leaflet’s footnote reads: Hurst, Printer, Journal-Office, Wakefield.

This meeting was momentous. It led to the explosive action by the Liberal movement in Wakefield that resulted in Daniel Gaskell being elected. Without Ann and her paper, Wakefield would not have played such an integral role in the abolition of slavery.

Dream Time Creative, the powerhouse behind The Forgotten Women of Wakefield project, is delighted that Ann’s strong moral compass was able to shine such a powerful light in the darkest of times and that she will be honoured with a blue plaque, unveiled on International Women’s Day 8 March 2021, which will be placed on the side of the building (Nat West Bank, 56 Westgate) where she produced her radical and visionary paper. Watch the unveiling on YouTube live when it happens: