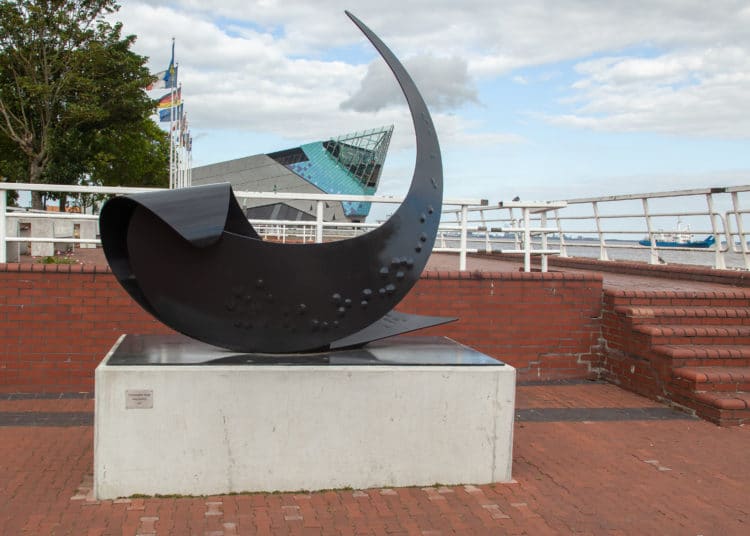 Cormorant boat sculpture – Hull by Steve Batch UK is licensed under CC BY 2.0

I work freelance in historical research and heritage, and moved back to Hull from Glasgow in 2017. My father, a Scot long resident there – my late mother’s hometown – was dying. We had both voted Remain, and he had been shocked at the strength of the Leave vote – around two-thirds of the votes cast here.

I heard people on the bus and in pubs talking about reviving the fishing industry. I also heard them talking about “getting the Poles and Pakis out”. “I don’t want to be ruled by them: it’s the French and Germans – they’ve tried it before!” said an old classmate, now no longer a friend. I wondered whether heritage narratives could have done more to challenge this mind-set; more disturbingly, I feared that, unwittingly, they may have fed it.

My early childhood was spent in the heart of the Hessle Road fishing community, yet my family was not part of it. My maternal grandfather had been a merchant seaman; my father, a Merchant Navy ‘sparks’ (radio officer) before he married. We lived opposite St. Andrews Dock, the fish dock. The air was pungent with fishmeal from the local factories. Even after we moved out to Bransholme (a large council estate to the north of the city), I recall the fishermen’s hymn, Eternal Father, Strong to Save, being sung in school assemblies when a trawler was lost, as with the Gaul in 1974. But it was the Cod Wars with Iceland, not EEC/EU membership, which precipitated the industry’s collapse.

The further the fishing industry has receded into the past, the more it has become the focus of celebration and commemoration. It was primarily a Victorian creation, spurred by the advent of the steam trawler and the railway networks to distribute fish inland. The St. Andrews Dock Heritage Park Action Group (STAND) was founded in 1989 by the late John Crimlis, an ex-fisherman who had lost two brothers at sea. Memorials and commemorative services have developed and expanded over the past thirty years. The triple trawler disaster of 1968 and the resulting safety campaign led by ‘Big Lil’ Bilocca, have been commemorated deservedly with murals, plays and television broadcasts. However, defining Hull’s identity through fishing alone risks unbalancing its history and distorting present-day meaning.

Merchant shipping has not been imbued with the same emotional charge, despite being the city’s foundation. In the 1190s, the Cistercian Abbey of Meaux set up a staithe at the vik of Myton, to export wool to contribute to Richard I’s ransom, after he was taken captive by the Duke of Austria. Thereafter, trade – chiefly with the Low Countries, northern Germany and the Baltic – fuelled Hull’s growth. From the heyday of the Hanseatic League, through to the sixteenth and seventeenth centuries, it became a European town of merchant princes. Apart from the de la Poles, briefly heirs to the throne through Richard III, these mercantile dynasties have been largely erased from popular memory. Listers, Lamberts, Berriers, Dewicks, Ramsdens, Ropers, Rogers, Crowles – these peruked aldermen with ringletted wives and daughters in stiff-boned satins, with Dutch-style brick mansions on the High Street and warehouses in Amsterdam, Hamburg and Danzig, lie under heraldic ledgers in the Minster. But they do not fit the ‘gritty working-class’ image promoted through the emphasis on fishing.

Immigration heritage has been commemorated largely as transmigration from Eastern Europe and Scandinavia to the US – the immigrants’ waiting room, the trains through to Liverpool taken by millions, including the Swedish songwriter and Industrial Workers of the World martyr Joel ‘Joe Hill’ Hägglund. Yes, the vast majority simply passed through – but others stayed.

There has been a Jewish community in Hull for at least 300 years – not just East Europeans fleeing Tsarist pogroms. The Samuelsons (who converted in religion) built ships at the mouth of the River Hull, ‘Sammy’s Point’, where The Deep aquarium now stands, and the Duveens, from the Netherlands, launched their international art trade empire from a shop on Carr Lane. The city has welcomed Scandinavians over the years: Amy Johnson, the first female pilot to fly solo from the UK to Australia, who was lost in World War II flying for the Air Transport Auxiliary, was from a Danish fish merchants’ family, originally named Jorgensen. There was a large German community, including the Ellerman(n)s, who dominated international shipping for much of twentieth century and left a legacy of Modernist literature and film in Winifred ‘Bryher’ Ellerman’s career. Celebrating the ‘birds of passage’ rather than the settlers appeals to America’s genealogical tourism market but risks implying: “You’re welcome so long as you don’t stick around”.

In terms of international partnerships, Freetown in Sierra Leone is most prominent, with an official twinning based on celebrating William Wilberforce’s abolitionist legacy – one of Hull’s most famous sons, who was influential in the abolition of the slave trade and eventually slavery itself in the British Empire. Rotterdam and Szczecin have a lesser ‘sister’ status, along with towns in the US and Japan. However, this downplays deep and longstanding links with the Netherlands – embodied by one of Hull’s most distinctive landmarks, the gilded statue of ‘King Billy’ (William of Orange, who later became William III of England) – in support of whom the town seized the citadel garrison from its Jacobite governor. Rotterdam, which like Hull was heavily bombed in World War II, is at the other end of the North Sea ferry run. Szczecin in Poland, once Hanseatic Stettin, also has old ties. Hull’s present-day Polish community (predominantly working-class) has grown substantially, but has suffered due to Brexit animosities. “It’s not the likes of you, it’s the Poles”, a Western European academic was told by a Leave-voting neighbour. On some of the rougher housing estates, young Poles have been set upon physically for speaking their own language in the street.

Those of us working in heritage need to think about what memorialising the industrial past can mean – whether fishing on the coast, or mining and steel inland. As with wartime history, there are fine lines between commemoration and glorification, nostalgia and jingoism. Turning these industries into ‘heritage’ – vehicles for local pride and identity, commemorating the dangers, celebrating the triumphs, naming the dead – can, perhaps, endanger the living. Vital current industries, with less machismo and swagger attached to them, may be sacrificed to appease ancestral trawlermen, foundrymen and miners. We need to think, too, about how international links and immigration histories are commemorated, and strengthen, not weaken, town partnerships with mainland Europe. It should be possible to remember the past and be informed by it, without being imprisoned by it.