Feelings are running so high that farmers are starting to resort to direct action, something more usually associated with farmers in France or Germany. 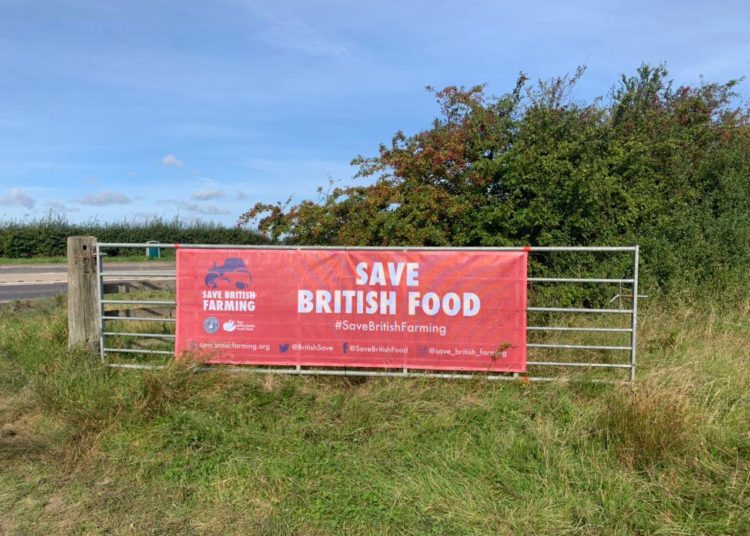 Photo courtesy of Save British Farming

For generations, sheep and cattle farmers have shaped the upland Yorkshire landscape we all cherish. Now many traditional farmers, so vital to the fabric of our rural communities, are at risk of being put out of business. Uplands farmers – particularly sheep and beef cattle farmers in the Yorkshire Dales and on the North York Moors – are now facing a triple whammy as a result of the fallout from a likely hard Brexit:

Many now feel they’ve been abandoned by a government that appears to think crippling the farming sector is acceptable collateral damage.

Feelings are running so high that farmers are starting to resort to direct action, something more usually associated with farmers in France or Germany. On Saturday 19 September a protest rally was held in Wales and tomorrow, Friday, there are plans for a demonstration in the North Yorkshire County town of Northallerton, to support the campaign group Save British Farming.

Jon Johnson, who is coordinating the demonstration, said:

“This is about the long-term livelihoods of future generations of Yorkshire farmers. Farmers are the custodians of the Yorkshire landscape we all cherish – but the government is ready to sell our farmers down the river in its desperation to get a US trade deal. If that happens, many farmers – particularly those in upland areas ­– risk being put out of business, undermining a whole way of life that is part of the fabric of our rural communities.

“Farmers all over the UK are getting angry about the government’s plans. The idea of undercutting our farmers with dodgy cheap meat from US factory farms is also hugely unpopular with the British public, with more than a million people signing the National Farmers’ Union petition to maintain minimum food standards”.

We spoke to Graham Clarke, who farms beef cattle, sheep and arable land near Thirsk. He said:

“Ministers claim they will protect British farmers by putting tariffs on US food produced to lower standards. But the Americans are in a much stronger bargaining position; their farming lobby is very keen to get a foothold in the UK market. It’s ‘America First’ and I just can’t see them allowing tariffs to be part of any trade deal.

“We have some of the highest welfare standards in the world and allowing our home market to be flooded with cheap, inferior meat from abroad would deal a hammer blow to livestock farmers in North Yorkshire. It’s no exaggeration to say many could go out of business.”

British agriculture is facing major changes in the coming months and, as consumers, we have to understand the challenges facing our farming neighbours. We need to support them in securing the best future for themselves, their livestock and ultimately, for us. Our farmers are currently paid around £3.5bn every year under the EU’s Common Agriculture Policy. More than 80 percent of these payments are ‘direct payments’ paid to farmers based on how much land they farm. This will soon change. The UK government intends to manage this change through a set of proposals in the agriculture bill, currently on its way back to the Commons from the House of Lords.

The agriculture bill is most important piece of farming legislation to come before parliament in decades. Attempts to protect UK farmers from low standard food imports were thwarted when it first went through the Commons, but on 22 September the Lords voted to uphold our high standards for imported products (with a majority of 100) and the bill is now coming back to the Commons.

If the agriculture bill is passed into law as proposed, ministers will have a free hand to tear up minimum standards on animal welfare, food safety and the environment to appease lobbyists from big farm corporations in the US. This would open us up to mass-produced meat from US factory farms and mean the USA would be able to sell us meat that falls well below the standards we currently expect.

Pauline Allon has written extensively for Yorkshire Bylines on this subject, detailing why “chlorinated chicken” is such a concern (hint: it’s not the chlorine, it’s what it covers up), what we know about “Ractopamine” use (banned in the EU and 160 countries including China and Russia), and how corporate control of the farming sector and is so damaging. Likewise, Martin Brooks has explored how the US will benefit from a trade deal with the UK, though lowering our food and animal welfare standards, undermining our healthcare and then profiting from selling us the solutions. These articles are well worth a read.

Other less well-known US food and animal welfare practices include the use of growth hormones on US beef cattle farms. 17 beta-estradiol, for example, is banned in the EU and is considered by EU scientists to be “a complete carcinogen”. Likewise, the hormone bovine somatotropin (given to dairy cows in the US to increase milk yields) is associated with increased lameness and mastitis in cattle which, in turn, often leads to increased use of antibiotics. Some research suggests people who drink hormone-treated milk may be at greater risk of breast and prostate cancer. It is approved in the US, but banned in the EU,Canada and Japan on animal welfare grounds.

Under the government’s proposals, there would be no requirement to label these products or identify their place of origin (neither of which the US lobbyists want, of course). This means consumers may soon not be able to tell whether the products they are buying have been produced to the current legal standards, this turning the clock back on decades of gradual improvements.

It is worrying for anyone who cares about their food and where it comes from – but it’s especially worrying for Yorkshire livestock farmers. If the government gets its way, farmers may soon be undercut by cheap low-welfare meat from America and other big meat exporters like Brazil, Argentina and Australia. And with a hard Brexit now very likely, our farmers’ biggest export market will be effectively cut off – with tariffs of 40 percent or more on beef and lamb exports to the EU. It’s worth remembering that 90 percent of our beef and lamb exports currently go to EU countries. Delays and red tape, with time-consuming customs checks and veterinary inspections, will make exports to the EU even more prohibitively expensive.

The demonstration will take place in Northallerton tomorrow from 1pm, meeting outside Northallerton Town Hall. Supporters have been asked to bring a placard saying how they feel about farming, food standards, animal welfare or the environment. Yorkshire flags are, of course, also welcome.

If you don’t have a flag or a placard, don’t worry. It’s more important that you are there.

Save British Farming are also organising a demo at Westminster on Monday 28 September. Details are available via their website.