Savour and reflect on the subtle beauty of an Ellisons pie. 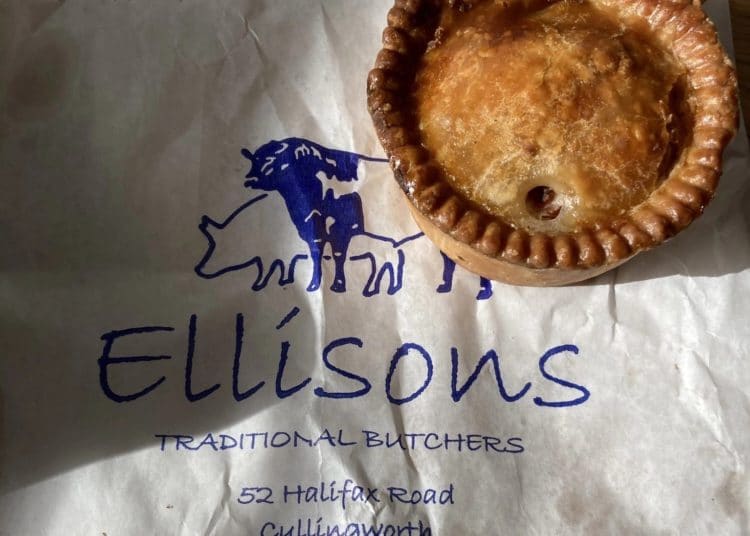 Can a pie have meaning? This would be a silly and pretentious notion if it weren’t so important and anyway, that’s what us poets are for. We’re like comedians: we can either give instant pleasure which evaporates on contact or we can make you look at the world differently. OK, some of us are so dull as to make you stare out of the window wondering why Look North presenters dress so badly.

And, to paraphrase Clive James, taste has a memory. I can still taste my first strawberry milkshake in Macari’s in Newquay in 1968. I can still recall the attendant sounds, sights and smells and its disturbing, supernatural pink. It was the colour of the inside of a bad pork pie.

And, let’s face it, foods can trigger powerful associations. This week’s pie, from Ellinons, the legendary outlet in Cullingworth, is the one I get on my way to look after my grand-daughter once a week.

And she’s the same grand-daughter we were prevented from seeing for the first half of the pandemic until an outbreak of common sense in Whitehall, (presumably while Boris ‘shake-hands’ Johnson was in hospital or having an ‘IT lesson’), brought a relaxation of restrictions where family members were providing childcare.

And if a thing stimulates sense and memory then de facto it acquires meaning. As the excellent Finding Jack Charlton documentary pointed out, once you have no memory, you have no identity and nothing has meaning anymore.

And Big Jack would have liked Ellisons pies because they’re similar to the man himself, though maybe not for the obvious reasons. A good pork pie might come across as simple, plain fare, but you just try making one. Big Jack is still often pigeonholed as the stereotypical no-nonsense northerner who triumphed in football because it’s all dead simple, isn’t it?

Actually, no. Nothing is.

And Jack Charlton didn’t succeed because he swore a lot and smoked. He succeeded because he built up enormous knowledge and insight during nearly 20 years of coaching, round Leeds, Castleford and Wakefield schools and earning all his coaching badges before he’d even finished playing for Leeds.

The bluff, jokey act was a genuine, but also wily front which concealed his detailed tactical knowledge and sophisticated player-management skills. His Route One tactics came about through years of observing the game at the highest level and was tailored to suit his cloth, a squad of otherwise unfancied players or troubled talents like the great Paul McGrath.

And an Ellisons pie eaten alongside one mass-produced for a supermarket has a hundred tiny differences which make all the difference and is as sophisticated as a Pastrami on Rye at the Russian Tea Rooms with Dorothy Parker and Truman Capote.

Those who stereotype Northerners as salt-of-the-earth-speak-as-you-find-eee-bah-gum-aren’t-we-gritty?-sons-of-soil quaffing pies whilst simultaneously marrying our own whippets, might benefit from some time savouring and reflecting on the subtle beauty of an Ellisons pie.

And, after such a nuanced meditation, they might stop retreating from the world by blathering on about Northern Independence and put their minds to actually becoming another Alan Bennett, Lesley Garrett, WH Auden or David Hockney, none of whom had any time for caps, whippets, Knurr and Spell contests or the fatuous notion that northern folks are genetically superior just because Look North presenters say it a lot.

And if all of this comes from a good pie, then anything is possible.