The Yorkshire Party has called for a referendum to create a regional parliament, with similar powers as to assemblies in Scotland and Wales. 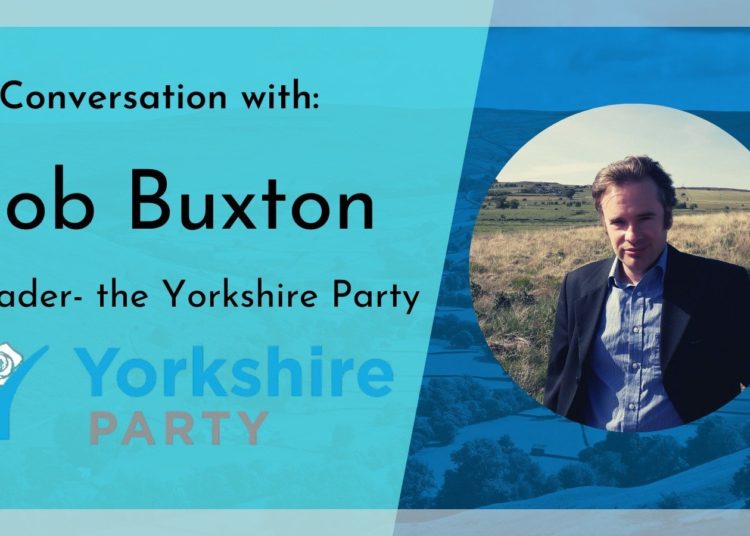 Image from the author

The Yorkshire Party is on the up. For the past two general elections it has won the sixth most votes in England, and the party has several councillors on various levels of local government. It’s hoping to increase this number at the next local elections in 2021, with an eye to the inaugural election for West Yorkshire mayor.

This week, the party has called for a referendum to create a regional parliament in Yorkshire, with similar powers allocated to it as to devolved assemblies in Scotland and Wales. I sat down with the Yorkshire Party’s leader and mayoral candidate for West Yorkshire, Bob Buxton, to talk more about the proposal.

For Buxton, the principle of a referendum is vital to his party’s “democratic ethos”. A parish councillor in Rawdon himself, he tells me of how he knocked on every door in his ward, asking what they wanted from him as their elected official.

“It’s the grassroots approach, you start by knocking on the door, but we’re getting the opposite approach from the government. It’s top down, the government tells large unitary authorities what to do, they tell parish councils what to do.”

This democratic ethos is continued in the management of the party itself, where policy is decided entirely by members, and no councillor is bound at all by any whipping system. Even the policy of a referendum, Buxton comments, was decided by party members.

It is this democracy, combined with avid localism, which drives Buxton and many of his colleagues in the Yorkshire Party. The leader is passionate about his duties as a councillor, and tells me about his work to prevent a planned link road to Leeds Bradford Airport which threatened to pass through his village:

“We built statistical models and worked together, standing on frozen streets in February, putting ticks on spreadsheets when people went past to prove that cars won’t go in the direction that you want to put a bypass.”

But the Yorkshire Party’s scope is far from limited to local issues. Buxton tells me of the efforts of a county councillor in the East Riding to get his Conservative colleagues to declare a climate emergency. Meanwhile, the party has its own Brexit stance, of advocating for an EFTA-style trade deal.

The policy exemplifies the internal democracy of the Yorkshire Party, which had been split almost 50/50 at the time of the referendum. During the campaign, it had let its members campaign however they wanted (provided that they did not demonise immigration), but committed itself to accepting the results, regardless of the outcome. That does not mitigate Buxton’s concerns about leaving the EU, and his anger at the prime minister for pushing ahead with his agenda:

“When the pandemic hit, everything was postponed: the Olympic Games, the European Championships. Basic civil liberties were postponed, elections, democratic rights were postponed. But not the date of leaving the EU. His popularity is based on getting Brexit done, and it needs to be more about getting it done right.”

Buxton has a clear plan for devolution, and hopes to borrow from the Scottish and Welsh models to make any delegation of responsibility to Yorkshire a success. One thing that he points out across the interview, is the fact that the UK is the most centralised democracy in the world:

“To find a country that’s more centralised with decision-making, you have to go to a fascist state.”

As a policy student myself, I have to ask him what exactly what he wants devolved that isn’t currently in the hands of local government. He laughs gently:

“Well we have very little devolved now, so … I’m trying to avoid saying everything.”

He lands instead on identifying things that he wouldn’t take into local hands – namely, foreign policy and trade. I’m struck by a comment he had made earlier in the interview:

“Localism isn’t just about getting a regional parliament for Yorkshire, it’s your town and parish councils being empowered to make decisions which only affect your town and your parish.”

This is the core of Buxton’s platform. If a policy affects a community, they should be on the front lines of the decision-making process.

Buxton’s idealism isn’t without shades of pragmatism. I press him on an issue that has been bugging me throughout the interview: how does he plan to make a referendum happen, when this can only really be achieved through Westminster?

Media coverage is a crucial part of his strategy, and he points to the national headlines which devolution has already garnered, such as the demand of 18 of Yorkshire’s 20 councils for the ‘One Yorkshire’ devolution plan. He then draws comparisons to the impact of UKIP on the Conservatives in getting them to hold a referendum, showing how a party on the periphery affects politics:

“Protest votes matter. UKIP at their absolute peak had only two members of parliament, originally by defection. [The Yorkshire Party] are a centre-ground moderate party, and we’re focused on something totally different … but it’s a protest vote which makes the other parties, bluntly, listen to you and perhaps even nick your policies”.

The Conservatives have already, Buxton points out, “borrowed” a Yorkshire Party pledge to introduce a floor of per-pupil funding in Yorkshire (although at a much lower rate than his party’s proposal). It’s this kind of pressure which, in Buxton’s eyes, might convince enough parties to cede ground on devolution so that a majority might be possible in Westminster. Commenting on the party’s electoral performance, he says:

“We are getting those votes, and people are starting to take notice. Opposition parties are starting to talk about a federal England and Yorkshire devolution. They’re not saying them very often, and at this point there are some in the parties saying these things because they support the cause, many others to get the votes.”

But, as Buxton is keen to remind me, David Cameron was a Remainer. You don’t have to have genuine belief about such issues to open the debate, only a feeling that the discussions need to be addressed.

My final question to Buxton was to ask what he would say to anyone potential voters:

“If I become West Yorkshire mayor, I won’t just make a decision, and consult on the decision I’ve already made, I’ll have a genuine consultation. I want ideas on the table. It is grassroots up, and it’s very much the opposite of what other parties do”.

The fortunes of parties can change dramatically, and if the Yorkshire Party can draw enough attention onto the injustice of devolution, they may well be a movement to watch in the local elections. Buxton comments to me at one point that he cannot think of any region with as strong a local identity as Yorkshire. Currently, his party is the main conduit for this identity. If he and his campaign can channel it correctly, something significant could happen.