Never walk behind the bowler’s arm

As the club cricket season gets underway John Cornwell recounts the rich heritage of Yorkshire cricket and the joy of playing in a village. 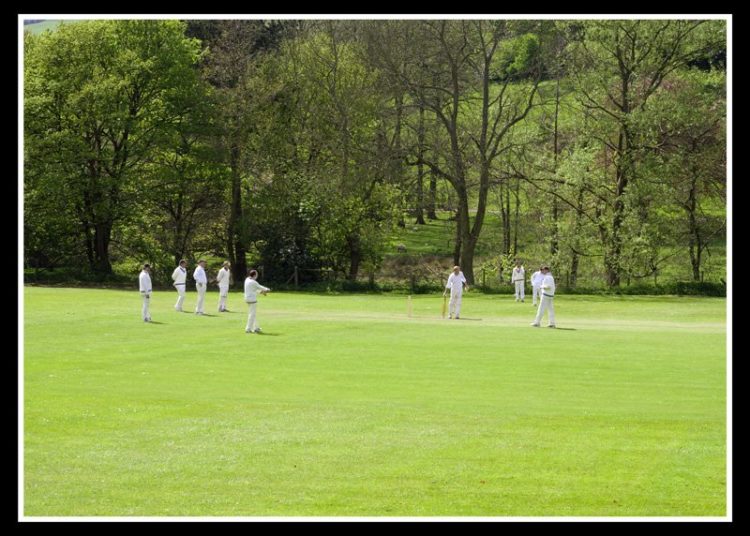 "Hathersage Cricket" by veggiesosage is licensed under CC BY-NC-ND 2.0

Alas, reality was somewhat different. I was just an average batsman, and a less than average fielder. Yet my love of cricket was hereditary. My father had been a staunch opening bat of the immovable variety, who felt it was indecent to get too many runs early on in an innings.

He impressed on me that all shots should go along the ground so you would never get caught in the deep. Nor would you ever score a six like those flashy batsmen who came in lower down the order, who perhaps modelled themselves on Denis Compton, for whom my school friends and I had a hostility of visceral intensity.

My heroes of Yorkshire cricket

My heroes on the other hand were all Yorkshire cricketers and pre-eminent among them was the peerless Len Hutton, who had once scored 364 against the Australians in 1938 at the final Oval test. A feat on a par with Churchill winning the war in my childhood pantheon of heroes.

My grandfather had been a good enough umpire to stand in Yorkshire matches when the county team visited its East Riding outpost at the Circle ground in Hull.

He passed on to my father the love and lore of the game and the importance of the etiquette of the game. Especially the crucial maxim of never walking behind the bowler’s arm, almost the eleventh commandment in our family.

“We don’t play cricket for fun in Yorkshire”

As a child, I knew much of the rich history of Yorkshire cricket before I knew about the history of my country. Tales of giants of the White Rose like George Hirst and Wilfred Rhodes, and a later generation of Hedley Verity and Maurice Leyland, and that near-invincible team of the 1930s that could have beaten a Rest of England XI any time in the decade.

It was always impressed upon me that when Yorkshire players said, “We don’t play cricket for fun in Yorkshire!” they were speaking the naked, unvarnished and blatantly obvious truth.

They say that George Hirst’s inswinger was like receiving a fast level throw from extra cover, and that Hedley Verity in 1933 took 75 wickets in July alone (and they were proper matches not the fancy farragoes of 50 over games or, heaven forfend, a T20 slogathon).

I never saw Verity bowl, of course, because in Sicily in 1943, leading his company of Green Howards in an attack on a crack German paratroop division, he was wounded, taken prisoner and later died in an Italian hospital.

I was never much good as a batsman at school, despite my pedigree. I looked the part and when I went out to bat (opening, of course – an hereditary calling) I confidently asked for “two legs, please umpire”, before emphatically marking the crease. I would then take my time to look dramatically around the field, as if I knew exactly how to place my shots to avoid the opposing team’s puny fielding deployments.

Then came the first ball that was always fast and I would usually miss it and only survive if the bowler was trying for a nick to the slips. Truth was, I was scared by really fast bowlers, especially after I landed up in Hull Royal Infirmary after being struck on the head by a well known demon bowler on the school cricket circuit.

Returning to school the following Monday I expected to be feted like a wounded hero toppled by an unplayable bouncer. Instead I was told that I had cravenly ducked so low that I appeared to be heading a good length ball off my middle stump.

After school I did not play cricket again until I was 35. I had enjoyed moderate success as a rugby player in the intervening years, but there came a point when you realised that if you continued to play you would break something serious.

It was after a match played in freezing rain on a near vertical quagmire of a pitch, where we had been trounced by an unacceptable margin, that I finally called it a day as rugby player. A decision confirmed when we found the showers were cold in our opponent’s clubhouse.

Although there were several cricket clubs nearby in Sheffield, I had no connection with any of them. Instead I chose my new club carefully. I visited a few village grounds and finally decided Hathersage was the loveliest, where the tree lined ground rested in a valley leading up to the foothills of Pennines beyond. With the ancient parish church high above you on its own conical hill behind mid wicket.

As I had no link to the village I wasn’t sure whether they would accept me as a member, but they invited me to a Thursday night net practice, where I managed to perform creditably with the bat and was welcomed into the club shortly afterwards. I only played in the Second team but it was still a fair standard of cricket playing Yorkshire and Derbyshire village teams and three clubs on the south western edge of Sheffield.

Now I found I had no fear of fast bowling, could play shots off my legs that I could never manage properly at school and aggregated a reasonable amount of runs each year for a dozen idyllic seasons.

I was even hit on the head by a fast bowler and came round lying prone at square leg. I struggled to my feet and determinedly returned to the crease before asking for a new guard. With some embarrassment their captain sidled over to me and said, “Sorry, old chap, but you are out. The ball hit your head and fell on the bails!” and so I had to go.

How did we play without helmets for so long? But at that time they were still unknown in village cricket.

Time and eyesight catches up with you

It was the eyesight that finally caused me to retire. I could not see the fast ball until it was on the end of the bat, and several of the grounds had pathetically small sightscreens or sometimes none at all.

Whilst in some of the more public grounds there was often a stream of unconcerned pedestrians casually walking behind the bowler’s arm. If you are an opening bat and you are out early after your side has batted first, the game can seem a trifle tedious, especially if your fielding is somewhere between poor and utterly embarrassing because of your advanced years.

The sublime beauty of cricket

On the other hand you could console yourself with a stroll around that beautiful ground and the knowledge that you had played a small part in the timeless history of cricket and of England.

Then at the approach of the early evening close of the match, as the last few overs are bowled, when the heat of a glorious summer’s day has waned a little, but can still be felt rising from the sun permeated ground.

When the slanting rays on the basking hillside reveal the horizon in sharp-edged clarity while the shadows on the trees enable every leaf to stand out in bold relief, it is then that you fully appreciate the sheer spiritual beauty of the game of cricket.

Is there cricket after death? There has got to be or what’s a heaven for?