Council draws line in the sand on Covid-19 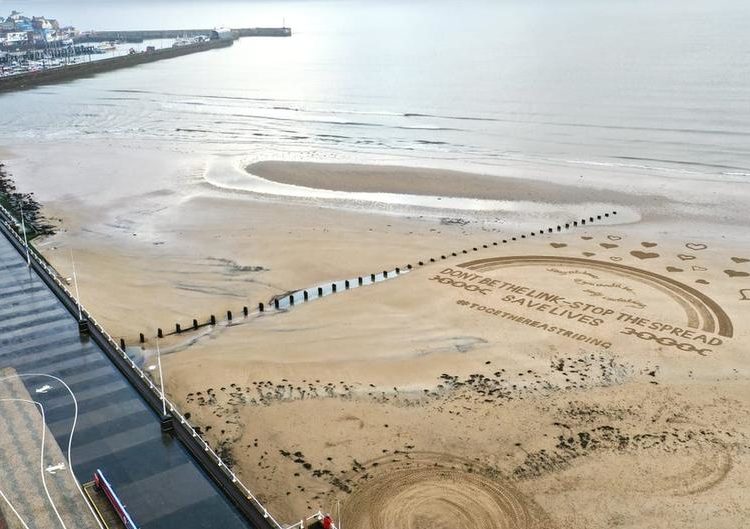 East Riding Council decided last week on a novel approach to communicate their 3 Steps to Safety message. In a climate where covid confusion reigns every time Mr Cummings goes for a spin in his Range Rover, they decided to use local sand artist James Brunt to get their message across.

As you can see, James fashioned a rainbow in the sand which contained the message: DON’T BE THE LINK. STOP THE SPREAD. SAVE LIVES. Above that, the message was STAY AT HOME IF YOU SHOULD BE SELF-ISOLATING.

“We are asking our local residents to keep following the 3 Steps To Safety: Prevent. Notice. Act. Keep doing the basic things which we know helps to prevent the spread of this virus: Handwashing, social distancing, wearing a face covering where appropriate and, if you’re not exempt, quickly responding to symptoms by getting tested and self-isolated if so advised. Nationally, a staggering 80 percent of people are failing to self-isolate when they should be.”

This initiative mirrors an increasing national trend, where the pace is being set by cash-strapped local authorities who are having much more impact than the government’s self-styled  “world-beating” (though, it appears, only in terms of cost) projects. For instance, the government’s £10bn test and trace system, run by private provider Serco, has been reaching fewer and fewer people. The latest figures, for the last week in September, show only 68.6 percent of contacts reached: the lowest figure since it started. By contrast, according to a report in The Guardian on 13 October, local authority contact tracers are reaching almost 100 percent of contacts.

Another interesting aspect of East Riding Council’s approach is that they have used their own slogans and focused much more on self-isolation as a means to control the spread of Covid-19. In addition, they’ve used a local artist.

Rishi Sunak recently implied that artists should consider retraining to do other jobs. Most of these artists haven’t had any income for seven months and the people who use their services usually aren’t even aware they exist. But artists are society’s expert communicators. The prime minister seems to think that communication involves talking at people, rather in the manner of a rugger team talk at a minor public school. Artists make their living communicating things so effectively, you hardly notice they’re there. The contrast couldn’t be clearer.

It is to be hoped, in the difficult months that lie ahead, that artists might be used to serve us in the way poster artists did in World War 2, in clear, simple ways that stick with the public.

It’d certainly have more impact than the prime minister having one more crack at Churchillian oratory that looks more like excerpts from a satirical panel show, and whose messages wash away faster than lines in the sand.