Cole Brothers (John Lewis) in Sheffield is to close, causing local residents to ask what the future holds for the city. 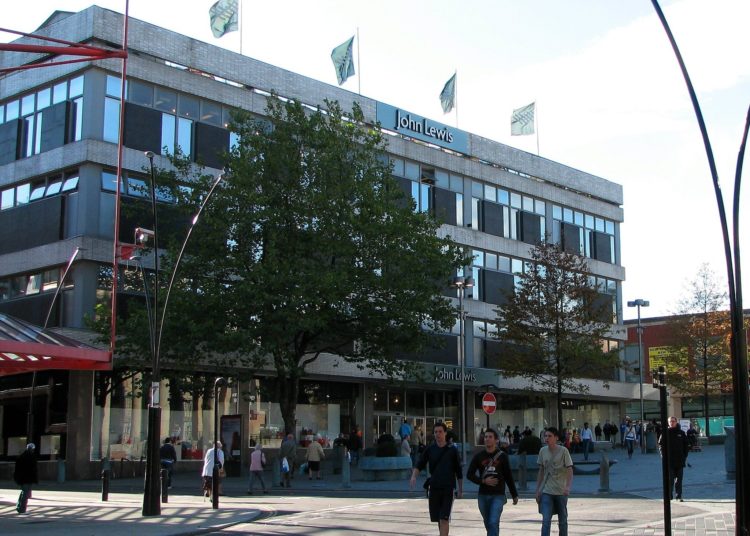 “Cole Bros” by fishyfish_arcade is licensed under CC BY-NC-SA 2.0

You have to be a certain age to know about Coles Corner but it is the stuff of legends – and a studio album from Sheffield-boy-made-good Richard Hawley. So the announcement today that the John Lewis Sheffield store (formerly Cole Brothers) is to close has been met with both incredulity and deep sadness.

The role it plays in Sheffield’s history is due to its prominence in the heart of the city from the day it first opened its doors in 1847 – and the fact that it was an early innovator, introducing delivery vans in 1911 and cash registers in 1916.

Coles Corner (John Lewis) in Sheffield is to close

But it was the romance of the store that made it a special place for people of a certain age, because it was at Coles Corner that people used to meet their dates. My mother, born in 1926, used to wax lyrical about how she met her girlfriends there – and unbeknown to my grandmother a few boys too.

It was an obvious choice of album title for Richard Hawley, and one that immortalised the legendary Sheffield landmark Coles Corner according to Wikipedia.

More recently, the store has played a pivotal role in the economy and viability of the city centre. According to today’s Sheffield Star, Sheffield Council had paid John Lewis more than £3.4m to stay open, after the company announced a £517m loss and was looking at the prospect of some store closure.

This is no doubt a foretaste of post-pandemic things to come. The Star reports that Sharon White, chair of the John Lewis Partnership, said “The pandemic has had an irreversible impact on retail and we must make difficult decisions to ensure the Partnership is sustainable in the future”.

Whilst the store was bought out by Selfridge Provincial group in 1927 and then later to John Lewis, it continued to trade as Cole Brothers until 2002. It was where the well-heeled went for their coffees and their clothes, and to be seen. It was the ultimate day out for my grandmother.

In 1963 Cole Brothers relocated to Barker’s Pool, but by 1994 there was a notable decline in the city centre and Sheffield Council recognised it needed to undertake a major retail development. This resulted in the ‘city centre masterplan’ (commissioned by urban regeneration company Sheffield One). But a recession then got in the way of realising much of this.

The other thing that got in the way was the decision to build Meadowhall, a major retail out-of-town shopping area, as a way of regenerating Sheffield’s industrial east end that had suffered so much with the decline of the steel industry.

The financial hammering South Yorkshire took during the 1980s and 1990s has not helped the city’s fortunes. South Yorkshire was one of the few places in the country to qualify for Objective One status for EU funding (along with Liverpool and Cornwall) and that tells you all you need to know about the state of the region.

“The Objective 1 Programme operates within areas of most need and supports the development of regions that are significantly falling behind the rest of Europe.”

The city has struggled to find itself against this backdrop. This is a city whose main employment is now to be found in the public sector and whose anchor institutions are the universities, the NHS and local government. So ten years of Conservative austerity measures have hit Sheffield harder than many other places.

Keeping John Lewis firmly in the heart of the city centre has been a vital part of keeping shoppers in Sheffield and resisting the magnetic pull of Meadowhall.

By 2018, the council published its masterplan ‘heart of the city II’, with John Lewis remaining in Barker’s Pool. According to this authoritative history last year, the council agreed to “buy out John Lewis’ long-term ‘nominal’ lease on its building in Barker’s Pool, enter into a new contract with a rent based on turnover, and give the retailer money towards the cost of a revamp”.

In other words the role that John Lewis plays in keeping other shops here in the centre of Sheffield is vital.

So, what now for the city?

Sheffield residents are in despair. The problem is, if you put all your retail eggs in one John Lewis basket you have little else to pull out of that magic Easter bonnet. Especially in the midst of a pandemic and economic downturn that suggests places like Sheffield are going to be hit hard as they come out of lockdown.

I hope our local politicians and planners are brave enough – and have the support from this government – to be able to plan creatively and productively to help the city centre survive. The role of anchor institutions needs to be fully understood and supported but also the need to have a mixed economy within our centres to withstand shocks like this closure.

In the meantime as we mourn the loss of Coles Corner a little nostalgia for all you Sheffield fans: