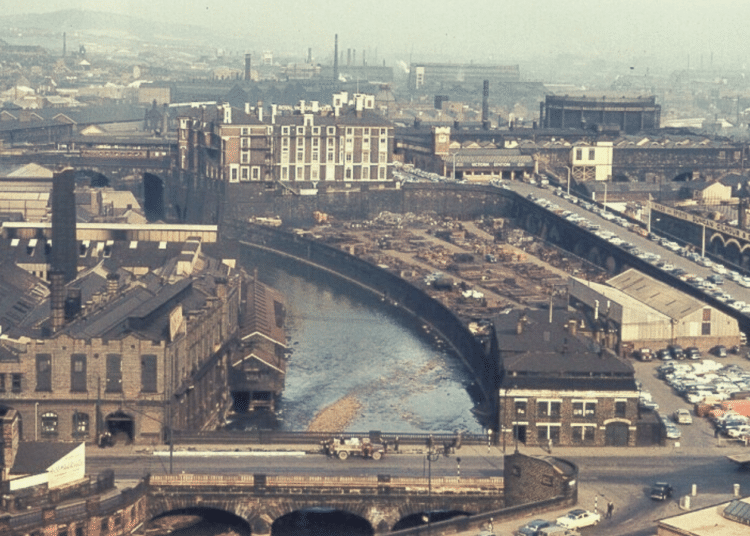 A view from the Royal Victoria Hotel in Sheffield in 1958 John Mace CC BY-SA 2.0

In less than a week, the government’s Job Retention Scheme will end, putting as many as five million people’s jobs at risk, according to Sheffield’s Festival of Debate organisers.

The Cliff Edges and Safety Nets online debate, organised for 29 October, will bring together Citizens Advice Sheffield and the Joseph Rowntree Foundation to discuss the challenges to the social safety net and ask how we can best support those most in need during this pandemic and beyond.

Here in Sheffield this is a burning question for those who have been campaigning to close the stark and growing inequality gap within the city. The Making Sheffield Fairer Campaign, taking its lead from The Sheffield Fairness Commission, has a bold vision: “A city that is eventually free from damaging disparities in living conditions and life chances, and free from stigmatising discrimination and prejudice, a place in which every citizen and community knows and feels that they will be treated fairly. We aspire to be the fairest city in the country”.

Professor Alan Walker, Chair of the Fairness Commission, and now leading the Making Sheffield Fairer Campaign, knows only too well that this pandemic has no truck with fairness:

“We are now looking at the prospect, over the next few months, of a further 20,000 people losing their jobs in this city. This is a tragedy for every person made redundant and their families. But we know that these job losses will hit those who are most vulnerable and, especially, those in insecure employment, such as zero hours contracts, and those with a low skills base”.

In August,  Citizens Advice  reported that one in nine people, the equivalent of six million people across the UK, have fallen behind on household bills because of coronavirus, with those in insecure employment being most at risk. New analysis reveals a series of gaps in the so-called safety net, which results in those unable to pay essential bills falling into debt or facing harsh enforcement or penalties.

It is also the young who will suffer. The Observer recently reported research by one of the UK’s leading labour-market experts, Paul Gregg, showing that almost 1 million vulnerable 16 to 24-year-olds across the UK who are not in full-time education or employment will face significant barriers to work when the furlough scheme ends.

In an already deeply unequal city like Sheffield, where for example life expectancy differs by up to 20 years between affluent and deprived areas, this pandemic will cause even greater divisions.

The most recent official labour market statistics from NOMIS show an out-of-work benefit claimant count of 23,350 across the city. In one part of the city, the constituency of Brightside and Hillsborough, nearly 10 percent of the working population (6,610 according to a House of Commons Briefing paper) are claimants, with 3,090 having joined the list between March and September this year. In nearby Sheffield Hallam, there are just 1,595 claimants (1,000 of whom joined the list since March this year).

As the free school meals row rumbles on, it’s worth remembering that some of the most vulnerable in the city are children – 22,000 Sheffield children are currently in receipt of free school meals. This figure is set to rise substantially when unemployment increases. New research by the Centre for Research in Social Policy at Loughborough University, for the End Child Poverty coalition, shows that child poverty has risen fastest in parts of the Midlands and Northern towns and cities since 2014/5.

The pandemic, and with it the new Tier 3 restrictions, is causing a perfect storm for those who are most vulnerable. Dame Gillian Guy, chief executive of Citizens Advice, says “With the finances of 12 million people now fragile, there’s a real possibility that new lockdown restrictions will force many people into debt this winter. Those whose employment is most insecure are unlikely to have any contractual employment support and are most likely to see their hours cut or lost altogether.

“Making sure the safety net is comprehensive and secure enough to protect people from poverty is vital in a decent society and, especially so during an economic crisis”, says Alan Walker. “We are increasingly concerned it will fail to catch the most economically vulnerable, and may actually make matters worse as changes to the welfare system and housing benefit are pushing people further into debt”.

Rising rents, in relation to income, have left many families with less money to spend on essentials such as food, clothing and heating. If a household’s income is reduced, the proportion left to spend on these essentials evaporates – keeping local housing rates in line with average rents across every local market is vital.

Of crucial importance is the fate of the £20 universal credit uplift that, according to Joseph Rowntree Foundation, has been a lifeline to those most in need during the pandemic. National poverty charity Turn2us is forthright about the impact of this being removed:

“In a society that believes in justice and compassion, it is inconceivable for the government to cut benefits in the middle of a financial crisis. Keeping the £20 uplift will stop 700,000 people from being pulled into poverty and stop a further half a million more from experiencing deeper destitution” Sara Willcocks, Head of External Affairs at Turn2us.

The prospect of the city becoming more divided and unequal troubles Alan Walker, chair of the Making Sheffield Fairer campaign:

“The last ten years of austerity measures have cast a very long shadow and, in particular, the slash and burn policies towards local authorities started by Osborne has meant there is little left in the Council tank to provide much needed resources.

“We also urge businesses to act responsibly towards their employees. The rise in unfair dismissal cases is worrying with Citizens Advice reporting that the backlog is now so great that many may not see their cases heard until July 2021”.

Sheffield Citizens Advice has produced a short video in which advisers talk about their experiences of helping people during the pandemic. As one worker puts it, “the most vulnerable people in this city are just up against it in all aspects … the cost of having kids at home … and just generally trying to manage. Their support has melted away and they don’t know when it will be back”.

Northern Tory MPs are now demanding a roadmap out of lockdown. But even if lockdown is lifted tomorrow there is still the need for a roadmap out of poverty. That must include a proper safety net for those who need it and access to long-term sustainable employment. If this government is serious about levelling up then it starts now – and it starts here.