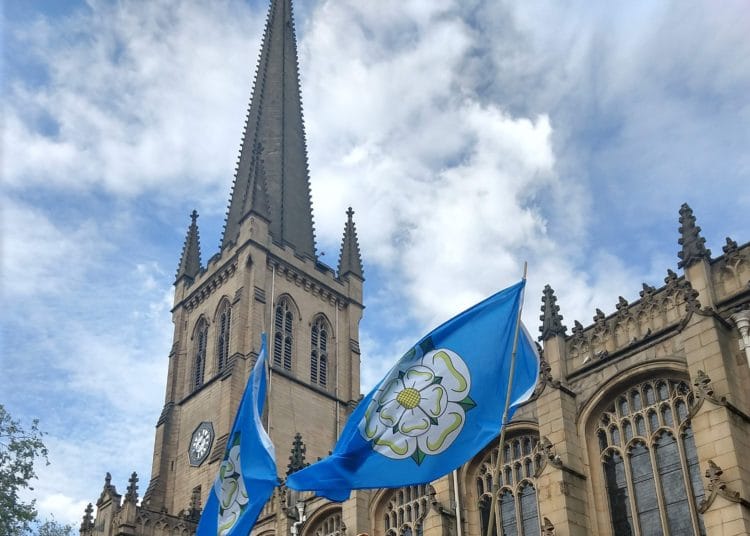 In September 2015 ahead of a speech in Leeds, Prime Minister David Cameron was asked about devolution. Thinking himself off mike he said, “We just thought people in Yorkshire hated everyone else, we didn’t realise they hated each other so much”.

Today on Yorkshire Day 2020 we are launching a new initiative under the banner ‘Together Yorkshire’ aimed at getting all the county’s organisations batting for the same team. An online zoom seminar will take place in September (almost five years to the day from the Cameron interview), and three sessions will examine the question: collaboration- what should be done at a Yorkshire Level?

Yorkshire has a population of 5.3 million – larger than that of Scotland – and accounts for over 10 per cent of the output of the UK. With a manufacturing sector that still employs one in ten of the population, it exports more goods than any region outside London. Renowned for its food and drink, national parks, coastline, heritage and stunning portrayal via film and TV, the county has in recent years witnessed a rapid growth in tourism. Yorkshire’s 12 universities contribute £2.9bn each year to the region’s economy and play a critical role in generating jobs and innovation. If Yorkshire had been treated as a country in the London 2012 Olympics it would have come 12th in the overall medal table, whilst seven of the 2018 England football world cup squad came from the broad acres. Nevertheless, in terms of research and development spending, transport infrastructure, health outcomes, skills and productivity growth, Yorkshire has ground to make up.

Against this background, in 2018 the leaders of Yorkshire’s 22 councils started meeting together and formed the Yorkshire Leaders Board (YLB). They were joined by South Yorkshire’s first elected mayor, Dan Jarvis. The YLB set out three objectives:

Their original plan was to ask the government to devolve powers, with an elected mayor for the whole county. After the result of the 2019 general election it became clear that this was not going to happen in this parliament, with four sub-regional agreements appearing most likely. The Sheffield City Region already have an elected mayor, who is assuming additional powers this year after the placing of a ministerial order in parliament. It is anticipated that following consultation West Yorkshire will follow suit with the election of a mayor in 2021. In both North Yorkshire and East Yorkshire / Hull discussions continue with government.

What will happen in future parliaments remains unknown, but for now the task is to make devolution work and explore what extra benefits collaboration across the county can bring.

This September’s seminar will examine how the YLB can, in association with other partners (whilst embracing the sub-regional devolution agreements), best pursue their remit in the following three areas of policy:

The aim is to increase awareness of the work of the YLB and to provide an opportunity for all those involved in relevant Yorkshire organisations to consider what more can be effectively done at a county level. The YLB has the potential to be the fulcrum around which a whole range of effective partnerships could thrive. There needs to be a strong collective voice for Yorkshire within the formal and informal institutions of the Northern Powerhouse to balance the influence of Greater Manchester, which has tended to set the pace. Invitations to the seminar (which is open to anybody interested) will be sent to those involved in politics, business, trade union, academia and other interested parties.

There will be a variety of speakers, ranging from Yorkshire universities to the Yorkshire and Humber TUC, CBI and Screen Yorkshire. The aim will be to agree some common priorities.

The new Archbishop of York, Stephen Cottrell has given his backing:

“Whilst only recently becoming Archbishop of York, earlier in my ministry I enjoyed working in this great county and today, I simply want to endorse the work Together Yorkshire are proposing. Yorkshire has so much home-grown talent we need to harness and develop as well as continuing to promote God’s own county to the nation and the world. The more we can work together to achieve these things, the more likely everyone across Yorkshire will benefit.”

There will be plenty to talk about.

How can Yorkshire more effectively lobby on issues like flooding (where the government has promised a summit for the county) and priorities in the forthcoming public spending round? Could the YLB, working with others, convene a number of annual events that highlight and develop the case for Yorkshire? For example, a Yorkshire business summit and a Yorkshire Parliamentary Day in Westminster involving a briefing for parliamentarians which would be of such quality and prestige that it would demand the attention of the prime minster and leader of the opposition? How about launching ad hoc initiatives such as a Yorkshire net zero commission, a Yorkshire energy taskforce, or a fair work charter for Yorkshire?

Is it possible to reach a concordat amongst the mayors and council leaders to collaborate on bidding for big inward investments and national and international competitions, to avoid duplication of effort? Equally is there scope for the development of a Yorkshire consortium of public authorities and school partnerships to deliver public purposes, such as the decarbonisation and increased energy efficiency of the public estate? How can we capitalise on the Yorkshire brand more? Could the Department of Trade and Industry regional office based in Barnsley and the four local economic partnerships do more joint promotion in association with the YLB? How can the increased prominence of God’s own county in film and TV be used to drive tourism?

Yorkshire Day is a day to celebrate England’s most prominent county, whether with a cup of Yorkshire Tea, or a glass of Yorkshire ale or gin. As our county cricket team starts its first competitive match of the summer, it is a time to believe the sky is the limit and we can at last prove David Cameron wrong!