Fossil Free West Yorkshire is part of the global divestment movement, which asks institutions like councils and local government pension funds to divest or sell their investments in fossil fuel companies as soon as possible. 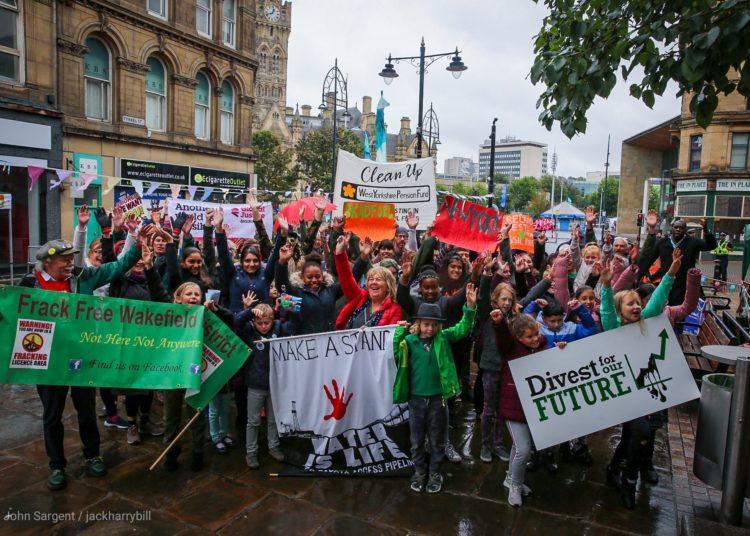 The Paris Climate Agreement aims to limit warming to well below 2°C and pursue efforts to limit it to 1.5°C. The recent Intergovernmental Panel on Climate Change (IPCC) SR15 report emphasised the need to limit warming to the more ambitious 1.5°C target; we now know that 2°C of warming comes with unacceptable dangers to humanity. However, the fossil fuel industry has about five times more fossil fuels in its proven reserves than can be used if global warming is to be limited to 2⁰C. Despite this, it continues to explore for even more fossil fuels.

As a result, we are currently on track to create a world marked by extreme heatwaves, declining global food stocks, loss of ecosystems and biodiversity, and life-threatening sea level rise. Warming beyond 2°C would come with a huge human death toll, render vast areas of the planet uninhabitable and have serious implications for global peace and security. The business plans of the fossil fuel industry are putting humanity in grave danger; urgent action is needed to address this.

Locally, there is a campaign doing just that. Fossil Free West Yorkshire is part of the global divestment movement, which asks institutions like councils and local government pension funds to divest or sell their investments in fossil fuel companies as soon as possible.

Divestment is important to protect investors from the financial risk posed by fossil fuel investments but it is also playing a crucial role in addressing the climate crisis. Fossil fuel divestment reduces the fossil fuel industry’s social acceptability and erodes its political power. This is an important precondition for the introduction of legislation to restrict fossil fuels and accelerate the transition to renewable energy.

Cllr Kevin Frea, Lancaster Council, wrote last year, “Following the drastically reduced dividend payments from BP and Shell, it is clear that local government pension funds must divest from fossil fuels. As pay outs decline rapidly and it becomes increasingly likely that these companies will never be able to use all their resources, there can be no more excuses. If councils leave it too late to divest, it will be the taxpayer who must ultimately bail them out.

“When the price of coal collapsed in 2015, UK local councils lost a combined £683m to their pension funds. Today, local government pension funds are just as exposed to the collapse of fossil fuel prices”.

Here in West Yorkshire, more and more politicians are joining the call for the West Yorks Pension Fund to divest. Holly Lynch MP joined nine of her parliamentary colleagues last week, saying “I am more than happy to add my support to the list of local MPs who support the call for West Yorkshire Pension Fund to start to divest from fossil fuels now. As we once again face extreme weather in our area, divestment sends a clear message that we cannot wait any longer for the shift towards greener cleaner sustainable energy, in order to create a liveable future for us all”.

Councillor Andrew Scopes (Labour, Beeston and Holbeck) led a discussion at Leeds City Council’s climate emergency action committee recently on fossil fuel divestment from pension funds, setting out both the economic case for doing so as well as the environmental one.

Other members of the cross-party committee in Leeds were supportive of the proposed action to call upon West Yorkshire Pension Fund to divest from fossil fuels in a planned way in three years or less, and to invest this money in alternatives that will secure the return needed to ensure the funds continue to meet and protect the needs of the public sector employees and pensioners it is there to support through their retirement.

Several aspects were highlighted to the committee, citing that over time, a vast majority of fossil fuel reserves would not be able to be burnt because of the harmful impact it would have on our climate and therefore would be deemed worthless as well as identifying the fact that globally, changes are already being made to the transition of energy.

“It’s important that we keep working towards our net-zero target of 2030 following the declaration of our climate emergency in March 2019. As a city we all recognise the impact that fossil fuels have on our planet. We are urging all our West Yorkshire neighbours to join us in committing to making the right decision, not only environmentally but financially.

“Globally we can see the changes being made to the transition of energy and fossil fuels are not a secure investment for the future. This move towards making our planet better not only for us, but for future generations needs to be made now.”

The Fossil Free West Yorkshire campaign is calling for the West Yorkshire Pension Fund (WYPF) to divest from fossil fuel investments. The campaign has support from a wide range of local residents, WYPF members and organisations across the region.