News that the UK and Norway have failed to reach a fishing deal for this year means boats like the Hull-based Kirkella remain tied up, possibly for good. 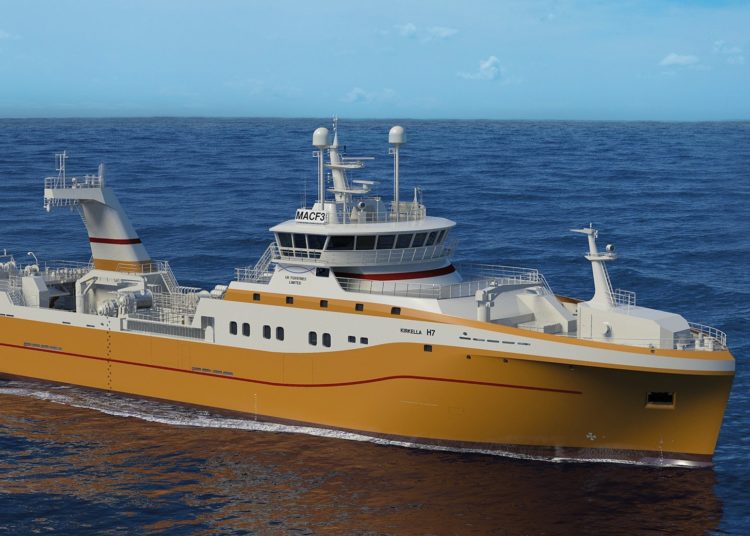 Model of the Kirkella by DIDigitalUK is licensed under the Creative Commons Attribution-Share Alike 4.0 International license

The sea of opportunity that Brexit was supposed to deliver has certainly dried up for Yorkshire’s fishermen. News that the UK and Norway have failed to reach a fishing deal for this year means boats like the Hull-based Kirkella remain tied up, possibly for good.

The Kirkella is a state-of-the-art trawler with a crew of 30 that catches 8–10 percent of all the fish sold in the UK’s fish and chip shops. It’s part of a fishing industry that goes back generations in Hull and accounts for over 100 jobs, plus many more in the supply chain.

Campaign to save the UK’s distant-waters fishing industry

The owners of the vessel, UK Fisheries, have spent the last two years campaigning to save the UK’s distant-waters fishing industry. They have invested approximately £180m in the last 20 years in the Humberside fishing industry, and had planned to put in a further £100m. Their scorecard shows just how slow the government has been to make progress with securing any trading arrangements with any of the traditional partners around the North Atlantic – The Faroes, Greenland, Iceland and now Norway.

It’s not just the lack of a deal, it’s the apparent lack of attention that the government is paying to this all-important fishing industry. All that UK Fisheries is asking is that the government negotiate continued low-tariff access to UK markets for Norwegian exporters contingent on Britain receiving the Arctic cod quotas.

Without a deal, British boats can no longer fish in Norway’s sub-Arctic waters. “In consequence, there will be no British-caught Arctic cod sold through chippies for our national dish – it will all be imported from the Norwegians, who will continue to sell their fish products to the UK tariff-free while we are excluded from these waters”, UK Fisheries chief executive Jane Sandell told the Yorkshire Post. She went on to say they had been promised a “sea of opportunity, not the scuppering of an entire industry”.

The anger from the owners of the Kirkella is palpable, leading Sandell to tell the BBC the lack of fishing deal is “a disgrace and a national embarrassment”.

As a press release from UK Fisheries recently asked, what is the point in setting up freeport on Humberside if your first action is to eliminate £120m of existing investment and future opportunities for the fishing fleet?

“We have had years to prepare for its discussions with the Norwegians. It should have been, to paraphrase the former Trade Secretary Liam Fox, ‘the easiest deal in history’. But the UK’s approach to all if its post-Brexit fishing negotiations seems to have been characterised by error and neglect”.

The anger from fishermen is UK-wide

It’s not just Hull that’s suffering; boats are now lying idle around the UK. Plymouth City Council’s leader claims the city’s fishing industry has been “betrayed” by the Brexit deal. Business Live reported that fishermen are unhappy with the post-Brexit deal, as it hasn’t allowed them to catch more fish as originally expected, and in the meantime EU boats are still fishing in UK waters.

The failure at ministerial level to handle negotiations with any success is indeed fishy. A solicitor representing 20 shellfish firms told the Guardian the government had shown “negligence and maladministration”. According to the paper, Andrew Oliver, a partner at Andrew Jackson LLP, said:

In February, Bridlington-based Baron Shellfish announced it was closing as a result of new post-Brexit regulations. Owner Sam Baron told the BBC it meant the business was no longer viable.

The Kirkella is the largest whitefish trawler in the UK fleet and can catch up to 2.3 million fish on each 60-day trip. Launched in 2018, it was officially named by the Princess Royal at Greenwich in London in April 2019. It later sailed up the Thames to highlight the threats facing the fishing industry if Brexit negotiations fail to deliver a deal.

At the time, Sir Barney White-Spunner, chair of the advisory board of UK Fisheries said, “Brexit has huge advantages for fishing if it is properly handled. Our concern is that it is not being properly handled”.

The BBC now reports that a DEFRA spokesperson has told then the UK has always been clear it would only strike agreements “if they are balanced and in the interests of the UK fishing industry”. They added, “We put forward a fair offer on access to UK waters and the exchange of fishing quotas, but we have concluded that our positions remain too far apart to reach an agreement this year”.

Many fishermen voted for Brexit on the promise of a better future, but for the crew of the Kirkella, that future now looks very bleak. Jacob Rees-Mogg can josh all he likes about getting our fish back, but it’s no laughing matter if your family income depends on fishing and if your local economy relies on the ability to have a viable industry.

Anyone who pays any attention to details knows that Britain exports much of what it catches and imports much of the fish we actually eat (the cod and the haddock down the local chippy). That’s what our industry is based on. So we may get our fish back, but we won’t eat them.

Karl Turner MP for Hull East told the Yorkshire Post that, “Brexit was supposed to be the fishing industry’s salvation, yet Hull is having hundreds of jobs and millions in investment left high and dry”.

And that’s the reality for the fishing industry. Used shamelessly in the propaganda war that was Brexit, to paint some nostalgic picture of reclaiming our waters and our fishes. Getting back our sovereignty and our ‘plaice’ in the sun. But the fishing industry has been used shamelessly, and is now largely ignored now Brexit is done. For places like Hull, that is unforgivable.