This real-life experience of a small West Yorkshire company, before and after the creation of the single market, provides an insight into our imminent future in the event that we leave the EU without a worthwhile trading deal. 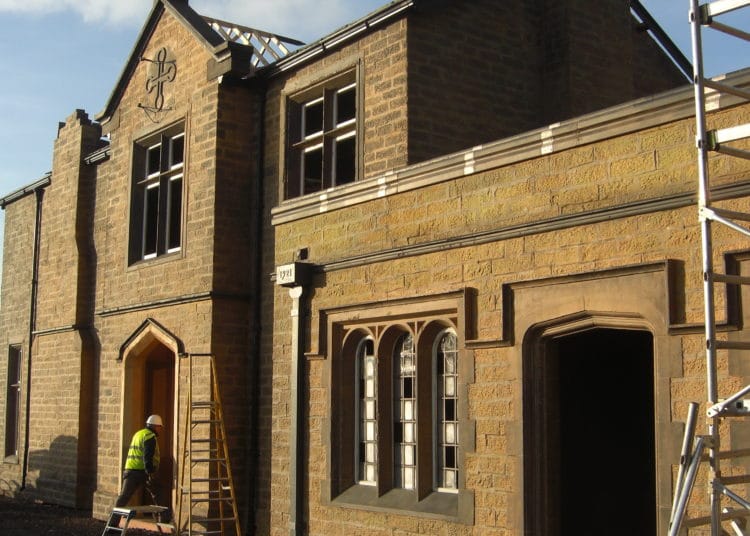 “Home Farm” – full size replica of Creskeld Hall near Otley, constructed from plaster sheets for use on the set of Emmerdale Photo credit: John Clayton

This real-life experience of a small West Yorkshire company, before and after the creation of the single market, provides an insight into our imminent future in the event that we leave the EU without a worthwhile trading deal.

The UK has more than two million small companies, possibly 170,000 of which are in Yorkshire. Ossett Mouldings Limited is typical of many, employing between five and 12 people depending on the workload. Trading commenced in 1973 as a specialist construction subcontractor near Wakefield and continues today under new ownership. This article gives part of the former owner’s exporting experiences from the mid-eighties to 2015.

Ossett Mouldings Limited made and installed plaster, fibreglass and cement mouldings for domestic, construction, ship fitting, film and television purposes. Some of these contracts were quite high profile. UK examples included Buckingham Palace, Kensington Palace and the Bishop’s Palace in York.

Contracts gradually expanded from the West Riding to North England, nationally and eventually internationally. Specially commissioned goods were manufactured and exported to several nations, mostly within Europe but some went further afield. Customs duties and paperwork were undertaken by their carriers and their customs agents, for reasonably affordable costs.

By 1986, the company was undertaking work in Europe installing these products. Customs agents were now employed to handle the detailed paperwork: T-forms, VAT work, tariff numbers for varied items and workers’ carnets. These carnets had every single hand tool listed so that they could be taken into the destination country and intermediate nations free of duties, provided they were duly recorded out again. The company carried out this onerous task for every tool required on every job in Europe.

In 1991, a project in Düsseldorf incurred problems. One consignment was held up for hours at the Dutch/German border until the only Maersk agent with knowledge of our client turned up for work. The following batch had much more serious trouble at the Europort. The necessary carnet papers were not “in the ship’s bag” as promised, so the tools couldn’t cross the border duty-free. The Dutch import duty had to be found, based on the sterling invoiced value plus their VAT – payable in guilders. This and other complexities took hours. When the driver reached the border to Germany all this cash was refunded in guilders. But just yards later into Germany, the duty again had to be paid – this time in deutschmarks.

Similar troubles occurred during construction work at Disneyland, when men were unable to get their carnets stamped out to UK. Also, every single delivery (and there were a great many) had to be approved by an agent to the south of Paris before goods could be loaded onto site. This added countless unnecessary hours to the work and meant as a company we were incurring costs for time spent simply navigating red tape and bureaucracy.

With the single market this became a thing of the past, just an unpleasant memory of lost time and wasted cost – real money, much time, huge costs. Now, we can simply load a van, car, lorry or container, drive to the site and start work. So very much easier and cheaper, with far less bureaucracy and no work permits, border delays or paperwork. Should you wish to, you can now watch long strings of lorries crossing European borders at 50 mph – unheard of before the single market and customs union.

It’s a remarkable fact that for this small, specialised company, export work in some years amounted to over 40 per cent of turnover. But for some time now, companies like Ossett Mouldings Limited have been unable to quote a firm cost for any upcoming work, due to uncertainty on transit costs and duties. Without knowing what form Brexit will take, companies that export to the EU cannot provide quotes for any work that might take place beyond December 2020.

After we leave the transition period, it is estimated that we could require as many as 50,000 new customs agents to complete the paperwork required as non-EU members. These customs agents are the people that used to beaver away in portacabins at Dover docks and at every entry and exit point for goods, exporting industrial units and despatching warehouses throughout the UK. In the absence of need or certainty, very few of these ‘form-fillers’ are currently being trained or engaged and it will not be possible to achieve these numbers by December.

It is therefore essential for trade and work that we maintain as much as is humanly possible of the present trading arrangements although this now seems highly unlikely.

We are saying goodbye to the progress we’ve made, to a great deal of trade, and to the genuine thrill of working abroad alongside local people. Whether we negotiate a free trade agreement or not, on 1 January 2021 we will be returning to the ‘bureaucracy and form-filling’ that we knew thirty years ago. A free trade deal will avoid the tariffs but a mountain of red tape will be the new reality – whatever happens.

Frictionless trade across Europe was made possible by the single market and the customs union. Once Theresa May announced in January 2017 that the UK would leave both, border controls, friction and form-filling became inevitable.

Johnson's failure to extend transition will come back to bite him