Two glorious banners, twelve lustrous golden stars above a dazzling white rose, assure every passer-by that there’s some corner of a Yorkshire lawn that is forever Europe. 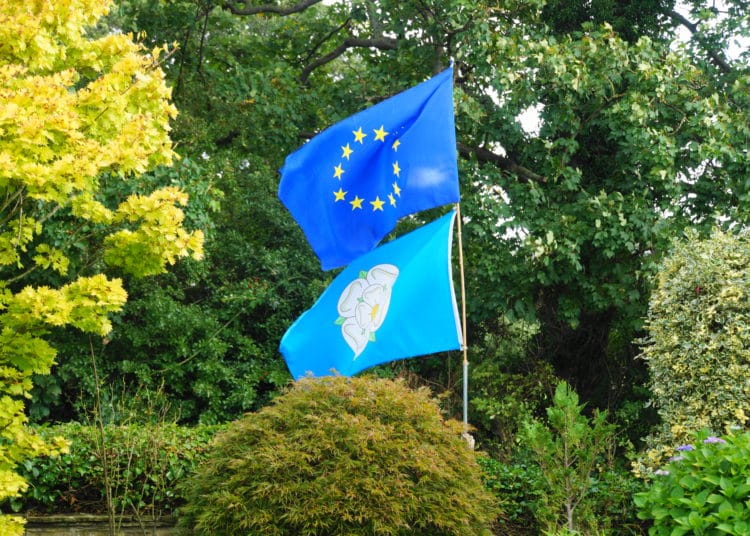 Two glorious banners, twelve lustrous golden stars above a dazzling white rose, assure every passer-by that there’s some corner of a Yorkshire lawn that is forever Europe. Both are veterans of street stalls and great London marches but neither flew above our garden before that bleak first day of February 2020. They flew in anguish, in mourning, as an angry up-yours to Johnson’s smug triumphalism, but mostly as therapy against a paralysing sense of life-sapping impotence.

Maybe you felt something similar? Unable to talk about it, avoiding people’s eyes: a day when it seemed unlikely you would ever smile again. Or maybe that was just me?

December’s election blow, as gaga as the referendum’s, still smarted like a septic Bullingdon-club jeer: the same grubby opponents, the same inane irrational lies. How could so many people fall for them? Our double-tongued adversaries mocked us in their gutter press. It was the dawn of the apocalypse that our hearts had believed never would come.

Despite my aerial EU stalwarts, I’ve never been a flag person. Too nationalistic, too chauvinistic, symbols of petty but perilous patriotisms, frequently abused. I confess that in the sixties when I hitchhiked in Europe I was proud of my rucksack’s Union Jack. They said the whole world loved it – it was better than a passport – engendering kindness and respect from every ilk of our inferiors. And, apart from young French conscripts competing for lifts to get home on leave, it was often prodigiously, enlighteningly true, especially from people who had survived two world wars.

Although their help may have been charity – Britain was then the Poor/Sick Man of Europe (two museum-piece designations imminently destined for reincarnation). British teenagers with rucksacks were renowned for indigence and sleeping in fields. UK currency restrictions allowed each to export only £15 in cash.

Alas, a Union Jack today makes me think mostly of chameleon-like quasi-political parties, ever changing their skins but never their hates and allowed without much protest, as if it were their own, to imbue it with the odour of something nasty from the thirties. My natural antipathy to jingoistic heraldry thus gave me pause for thought. My wife had other qualms: might they seem a provocation? More bricks over our wall as during the election? But, desperate days, desperate deeds.

From the moment they flew, cracking like whips against a grey sky, the day seemed to brighten. Delusional? Perhaps. But my sombre spirits soared. Perpetually in motion, they seemed like tireless allies who would never submit. Tilting at windmills? Fighting old battles? Let every passing car and every neighbour see that we had not gone away.

The following days were revelational. From our left and our right emerged confrères we had never previously suspected. People who had rarely acknowledged our existence now bestowed us knowing beams. Some wanted to chat, venturing their sympathies conspiratorially, confiding private opinions as if with relief. Some railed against Johnson and his shambolic yes‑men government, or raged against Brexit – against a future for their grandchildren trapped on a prison island. In our murky civil war of suspicions, lies and silence, the flags worked like magic mirrors: sifting friends from foes. For foes there were too, some looking perplexed (was it not all decided?); some looking annoyed, as if they longed to tear them down. Hostile scowls did not surprise us yet, attesting bulls-eye hits, were as rewarding as the smiles.

Our mobile fishmonger from Grimsby has supplied us for years. We love his fish dearly but, Brexit Grimsby being Grimsby, his response was unexpected. “Brilliant!” he said. “My wife would love one! No one mentions it in Grimsby. We’d been saving to retire somewhere nice and warm. What’s happened to that? And who can tell me if there’ll be any fish?” We have not since dared enquire if his wife has her flag – that might still be rash in Grimsby – but between the hake and haddock we now fearlessly flay prime‑ministerial cods.

“Brilliant! My wife would love one! No one mentions it in Grimsby. We’d been saving to retire somewhere nice and warm. What’s happened to that? And who can tell me if there’ll be any fish?”

Our most uplifting new friend was the burly temporary postman who stopped us in the street. “That your house with the flags?” (Could this be trouble?) “Well, they’ve made my day”. He was positively fizzing. “Full-time Tyke and European, me! Watching tele these days you think there’s nobody but you.” When he reached our door, I’d found him two New Europeans. For all I know, it now has a new subscriber.

With so many closet Europhiles coming out nearby we pondered again, as on countless nights between, how that distant referendum had ever been lost. But, back then, such an outcome had seemed too silly to contemplate. We needed only to let the Brexiter fantasists – the clownish Farages, Johnsons, Rees-Moggs and Smiths – make our virtuous case for us. How many of us dreamed of flags and mammoth marches ever being necessary? Wise to keep our heads down. We still count the cost the hard way.

Today we are all in the same Covid‑19 barrel. Sold as national/patriotic unity, behind its awful cover the better-dead-than-European self-seeking fanatics hide their wobbling Brexit pipe-dreams, heedlessly herding four scarcely bleating nations towards their suicide leaps.

Scary days indeed. But imagine – even now – that some of those who liked our flags flew flags of their own. Imagine others seeing them and wanting one too. Imagine if we all did what most of us skipped in 2016 – every street in Britain first with one flag, then hundreds, breeding faster and outrunning any known virus, until there were millions fluttering from windows, hanging from balconies, wafting on poles. Countless languish in cupboards. Many last tasted sunshine on a London march. Imagine if a ripple became a tidal wave. Maybe my own fantasist pipe-dream – maybe people would laugh – but do not be told by anyone that this is not the time. The reeling nation needs hope: an inspiring lucid hope that will shine into a future far beyond the future that seems to face it now.

As Britain’s skies blacken with incoming roosting chickens, anything is possible; nothing is inevitable. The skies can still turn blue and be studded with stars. We have a potent inborn force that Johnson’s shady puppeteers, the would-be-Machiavelli Cummings and co, are just too smart to comprehend, and that is the talent of the British, as in 1945, to see through emperors’ clothes. The damage by then may be truly formidable but morose prognostications and apathetic resignation must never submerge the vitality and confidence of our millions of marchers whose stellar banners lit up London. If not us, then who? If we are not now on the streets let us still be in the air. Sooner or later reason prevails; sooner rather than later we will get our mainland back.

We may then buy a taller pole to fly our own flags higher but, unlike the Brexit conmen, we won’t be gloating; we would never up in Yorkshire say we told you so. Well, ee by gum, not much.

Slaves to the algorithm: our four-year-olds are next in line