With the focus these days on executive mayors, the role of the traditional mayors and lord mayors can get overlooked 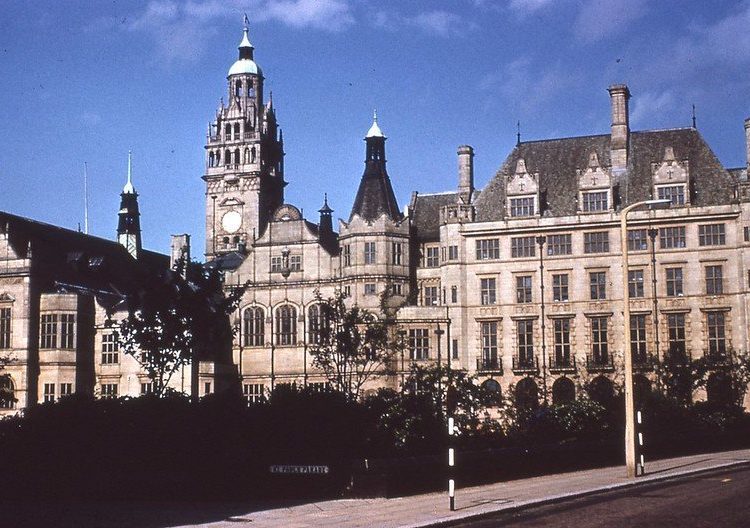 Sheffield Town Hall by The JR James Archive, University of Sheffield is licensed under CC BY-NC 2.0

With the focus these days on executive mayors, the role of the traditional mayors and lord mayors can get overlooked. Here John Cornwell recounts the challenges that three Sheffield lord mayors had to face while discharging their civic responsibilities.

For almost two decades I was a local councillor in South Yorkshire. I soon discovered that there were three givens about the public’s attitude to their council. Firstly, everyone at some time had a real issue with a decision of their elected representatives and harboured a bitter resentment thereafter. At one social gathering I was harangued for 20 minutes by an irate ratepayer about the bin collection service, until it emerged he was from Birmingham and the problem was in that city 90 miles away. Secondly, every ward or district of the city believed it was the ‘forgotten’ area, even if millions of pounds had recently been spent on projects or services in their neighbourhood.

The third constant was that the acceptable face of local government was the position of the lord mayor. Whilst the people taking the hard decisions were regularly pilloried in the press and public meetings, the office of lord mayor was almost universally popular. People liked the lord mayor to attend their functions, receive them in the town hall, open their buildings, and give keynote speeches.

The lord mayor was usually chosen from councillors who had served for a long time, their mayoral year often serving as a valedictory reward before they left local politics. Leading councillors shunned the position because they would be out of the political whirl for a year and possibly never reclaim their senior position at the end of their mayoral term.

This was not the case with Anthony who, in a break with tradition, was quite young when he was made lord mayor. Still in his thirties, he got himself involved in a fund raising stunt that an older lord mayor could never have considered. To raise money for a children’s clinic in Mozambique he was persuaded that it would catch the public’s imagination, and raise considerable sponsorship, if he abseiled down the 200-foot-high tower of the town hall.

Keen to support a good cause, he readily agreed. Although he had no previous experience of mountaineering, let alone abseiling, but he was told it was pretty easy really. He was taken out to Derbyshire with some regular climbers and practised on one or two of the more challenging edges and found it was not all that difficult if you held your nerve.

Come the great day the area around the town hall was packed, not only with people keen to see him make the descent, but with regional TV cameras and a well-known BBC talk show host running a live commentary on local radio. To increase the dramatic effect, the organisers had decided that rather than just appear at the open balcony at the top of the tower having climbed the interior wooden stairs, Anthony would ascend to the top by a fire brigade extendable ladder and there he would prepare for the descent.

By now, a considerable uncertainty had started to chip away at his resolve but he hung on to the rails of the little platform at the top of the ladder and up he went. Unfortunately the ladder, when fully extended, was just a five feet short of the balcony where he was to get into the safety harness. So, when it was suggested to him that he could just climb the final bit over the parapet, Anthony admitted defeat and called on the intercom to be brought back to the ground.

Seemingly at an impasse, the organisers were conscious that they had raised a great sum in sponsorship with a fair amount of it from people in the crowd, who were now rather confused to see the lord mayor return to earth. Step forward Roger, another councillor, who was about the same age and solid build as Anthony, who also had a mature beard and at a distance looked remarkably similar. Borrowing the helmet and swapping his sweater for the lord mayor’s bright yellow tee shirt, Roger went up to the top of the tower on the fire brigade’s ladder. Climbing nimbly onto the balcony he then abseiled down, while most of the crowd were unaware that this was anything other than a second attempt by the lord mayor; who in the meantime had quietly slipped away into a back entrance of the town hall.

When Florrie had been first elected to the city council in the mid-sixties, the advice she got from the whips was, “say nowt for at least a couple of years”. That suited Florrie because she had “nowt” to say, but she could always be relied on to turn up and vote and was generally considered a sound member who wouldn’t let the side down.

Almost 20 years later it was her turn to be the next lord mayor and, like other lord mayors before and since, she surprised many of her colleagues and became a popular figure, universally regarded as having had a successful mayoral year. During her year she blossomed and gained confidence, as her warm personality and her common touch came shining through at official functions and community group events. She couldn’t stand the “posh” food that was served up at town hall dinners and banquets though – food that one lord mayor had called a “year-long gastronomic assault course” – preferring instead to get the chauffeur to stop the civic Rolls outside her local chippy on the way back to her council house, so she could get some “real food” instead.

She was never more at ease than at official openings, even of substantial buildings of prestigious organisations, but there was one occasion where she was suddenly very uncertain about what she should say. The third item on the list that morning was the opening of a new public toilet in one of the municipal parks. Suddenly lost for appropriate words she stood outside the toilet with scissors in hand ready to cut the ribbon, when the civic party suddenly heard the sound of a flushing toilet. Within a few moments an elderly man emerged, bewildered to see so many smartly dressed people in a semi circle around the entrance. He pushed his way through the ribbon, while Florrie announced that the toilet was now well and truly open.

When Michael was lord mayor in the first decade of this century, he was asked if he and the lady mayoress would do a photo call for the National Ballooning Championships taking place on the southern edge of the city. On these occasions, lord mayors are expected to muck in and get involved in the spirit of the occasion. So when the lord mayor and the lady mayoress were greeted by the principal organiser, who claimed he was a world champion balloonist, they felt it was only proper that they accept his offer of a short flight in his balloon. Although they had some difficulty climbing into the basket, for neither of them were young any more, they assumed that they were just going up vertically and then would land again after a few minutes.

Whether the ‘world champion’ lost control, or perhaps the wind took over, they suddenly found themselves flying north over rows and rows of houses towards the city centre, and began to feel a creeping consternation. This concern was shared by the lord mayor’s chauffeur who was supposed to keep an eye on him at all times. Even more important, he was responsible for the security of the mayoral chain and badge, now several hundred feet above them and heading rapidly away.

Whilst lord mayors are replaced every May, the 18-carat gold chain designed by Sheffield artisans 150 years earlier was priceless, and now it was almost out of sight. Thinking quickly, the chauffeur started up the car and raced down the main radial road until he once again spotted the balloon that carried the mayoral couple and the chain of office, not to mention his job prospects. However, when he drove into the one-way system in the centre of town, he lost sight of the balloon and never caught a glimpse of it again.

Meanwhile the lord mayor was sailing along over the northern suburbs while his pilot desperately looked for somewhere open and flat to land his balloon, not an easy thing to find in Britain’s hilliest city. Finally, having almost cleared the built up area, he spotted a suitable spacious piece of open grass and skilfully put the balloon down without tumbling his passengers over.

Looking around them, they could see there were quite a number of people gathered around a stylish building a hundred yards away and the penny now dropped on the three of them. They had landed close to the 18th green of a suburban golf club and the members were now heading towards them looking rather angry. When they saw the mayoral chain, they suddenly realised who their new guests were and their demeanour changed completely. They were holding their annual charity bash and were now delighted that the lord mayor had literally dropped in and could share the occasion with them.