We need a new philosophy of poverty and wealth that incorporates an understanding of what constitutes a ‘good life’ and an explicit discussion about who is valued in our society and why. 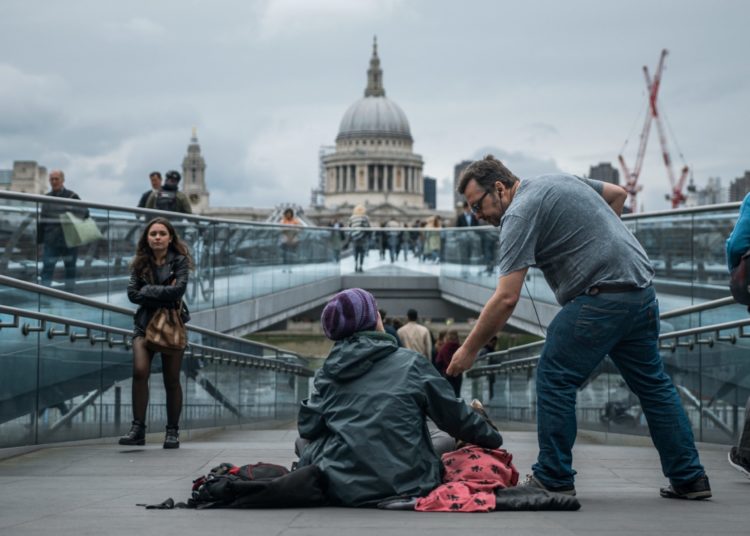 Photo by Tom Parsons on Unsplash`

The number of people plunged into poverty during the pandemic has risen significantly, and the numbers are expected to rise further as relief measures come to an end sometime this year. How the chancellor responds in today’s budget is not just a technical matter of devising the best way to get the country through this crisis. It will be an expression of his underlying philosophy of poverty and wealth. Who does, or doesn’t, deserve to have their needs met?

Measures to tackle poverty reflect the belief systems of their time, both politically and morally. In the 13th century, St Francis of Assisi’s rejection of money, which was just beginning to be more readily available, and his construction of poverty as a holy state, gained thousands of followers and revived the waning fortunes of the increasingly corrupt Christian church.

By 1526 Jean-Louis Vives’ work, On Assistance to the Poor, redefined wealth as the most visible sign of God’s approbation, being an inevitable outcome of hard work, abstemious living and saving. It was no longer the barrier to heaven previously assumed and its converse – lack of wealth – was viewed as indicative of sinful living.

The New Poor Law of 1834 was heavily influenced by Thomas Malthus’ 1798 Essay on the Principle of Population, in which he said that population increase would always outstrip the capacity of a nation to feed its subjects. And in 1942, Beveridge argued that with a good plan and resources, poverty could, and should, be eradicated.

Coronavirus has exposed a high level of ‘capability deprivation’ amongst children, as access to computers, space for study and opportunities for sport or creative activities have been lost. Many children have gone hungry and some have been more exposed to domestic violence and parents under stress.

The pandemic has shown that poverty affects those in work too. As well as affecting the unemployed, poverty has been very evident amongst those working in low-paid, customer-facing, often part-time jobs, or in the gig economy with no sick pay or pay to self-isolate. Women and people from a black or ethnic minority backgrounds have been hit hardest.

Covid has also made some of those who are poor less visible. The government policy of ‘everybody in’ enabled local authorities and charities to identify all those living on the streets and ensure they were provided with accommodation. While poverty is increasingly evident as the pandemic has continued, absolute destitution has receded from public view and the destitute have been trapped behind closed doors, like inmates in a Victorian workhouse.

The Tudors first delineated in law the deserving poor (‘widows and orphans’ or fathers ‘overburdened’ with more children than they could support) from the undeserving (‘sturdy beggars’ who would be put to work) and the criminal (‘vagabonds’ who would be whipped and placed in the stocks). Ever since, the state – then in the form of the parish, now in the form of national government – has spent almost as much time and energy devising the means to exclude people from support as they have in providing it.

Then, some parishes spent almost two thirds of their poor law rates on sending back to other parishes those for whom they didn’t wish to be responsible. Now, the government spends vast sums of money trying to return refugees or immigrants to other countries. Then, as now, those who couldn’t prove they could support themselves through to death, might be refused leave to remain.

Much of this is in the grey economy. Almost all of it is poorly paid, with some sectors (care, restaurants, agriculture and cleaning) known for labour exploitation and even slavery. The government, with the support of upper and middle-income voters, has been highly invested in this low wage or exploitative pyramid as evidenced by the low level of prosecutions.

An exploitative economy supported by government policy that regarded immigrants, as ‘undeserving’ had, until coronavirus, successfully keep the lid on demands for reform. While unemployment and poor public services could be blamed on immigrants, there was no need to redesign the underlying economic models that sustained them. Coronavirus revealed that rather than being a drain on the taxpayer, most of us are highly reliant on immigrants, particularly immigrants of colour, to protect our health and ensure we are fed.

The government seems intent to return us to a pre-covid lifestyle as quickly as it can. Its economic philosophy appears to be informed more by the post-WW1 ‘roaring twenties’ than the post-WW2 rationing and rebuilding of the 1940s. But the government may be out of step with the public. Many people want some recognition, beyond the Thursday clap, of the sacrifices made by healthcare and other frontline workers. And many believe the old lifestyle is no longer fit for purpose. The spread of coronavirus, its causal links with the destruction of natural habitats and the rise of zoonotic diseases, and the rediscovery of nature during the hiatus, has led some to question how we should live our lives in the future.

While most people understood that the future of life on this planet is best served by living more simply and reducing our consumption, the means of achieving this seemed out of reach before the pandemic. The recent changes in daily habits have shown people that it can be done, and even the most ardent hedonists seem to be contemplating a slightly less frenetic and environmentally more aware return to normality once the pandemic is over.

A more environmentally conscious and simpler way of living is in conflict with an economy based on continuous growth and the low-pay pyramid. They are irreconcilable. We need to understand better the social and economic functions of poverty and who its beneficiaries are. While not advocating a return to the beliefs of St Francis or 13th century living, it would do us good to reconstruct modest living as a desirable state to which all have access, and wealth as a potentially destructive force that needs to be moderated.

We need a new philosophy of poverty and wealth that incorporates an understanding of what constitutes a ‘good life’ and an explicit discussion about who is valued in our society and why.