Why we need a coronavirus public inquiry

An excess death toll of 66,000 is, of itself, sufficient reason to reflect on how the pandemic has been managed. 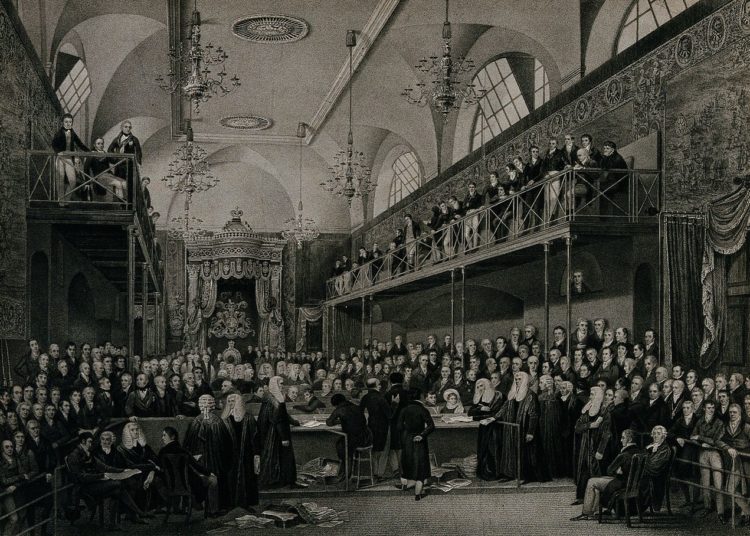 Interior of the House of Lords during a public inquiry in 1820 Picture credit: Wellcome Collection gallery, Creative Commons licence

An excess death toll of 66,000 is, of itself, sufficient reason to reflect on how the pandemic has been managed. The government says it will reflect but not yet and has made no commitment to how that reflection will happen.

In the absence of any government commitment to an open, wide-ranging review, groups of scientists, peers, families of the bereaved and the TUC have individually and collectively called for a public inquiry. A YouGov poll on 11 June indicated that 53 per cent of the public thought there should be an “independent public inquiry”, 33 per cent thought there should not and the remainder didn’t know. A March for Change petition seeking a public inquiry has now reached over 100,000 signatures.

A public inquiry is a very expensive, lengthy process. Even determining who will chair the inquiry, what the terms of reference will be and who will be a ‘party’ to the inquiry and therefore entitled to legal representation can take months. An inquiry into the government’s handling of coronavirus might report in time to assist in preparing for the next global emergency or pandemic but would be of little help in dealing with a second wave of coronavirus. The likely timescale of any report is simply too long.

In order to prepare for a second wave of coronavirus expected towards the end of this year, we need targeted, rapid reviews as currently sought by the various royal colleges for surgeons, nursing, physicians and GPs. In their letter, they state:

In response to the royal colleges’ letter, the Conservative chair of the commons liaison committee, Sir Bernard Jenkin, offered to lead a “lessons learned” review adding: “It is essential that the UK is prepared for a second wave of coronavirus later this year. We do not want another Chilcot-type inquiry at this stage, but medics are right to call for a swift cross-party ‘lessons learned’ exercise to be completed by October”. He suggested it might take the form of the parliamentary commission on banking standards that reported after the financial crash of 2008.

On 26 June, and in the absence of any review being planned by the government, an all-party parliamentary group (APPG) been established, “ensure that lessons are learned from the UK’s handling of the coronavirus outbreak so far such that the UK’s response and preparedness may be improved in future”. The group will begin its review in the next couple of weeks and is coordinated and supported by March for Change.

So, given that there will be an APPG review, do we need a public inquiry (as understood by the Inquiries Act 2005)? Firstly let’s not conflate the two. A rapid review whether undertaken by a parliamentary committee or some other body, if it began its work soon, might have something useful to tell us by the autumn and help prepare for the next phase of the pandemic. Given the timescales, it could only tackle the most pressing problems and would not have the capacity to address some of the wider concerns raised by some of the groups. In particular, it would have neither the capacity nor the power and authority to tackle some of the concerns raised by the families of the bereaved who are seeking some formal recognition of their pain, and government accountability for decisions made.

Neither error nor incompetence is sufficient reason to seek a public inquiry. Citizens might despair at the government’s handling of the crisis and be angry that this has led to many unnecessary deaths but still not call for a public inquiry. The tipping point in public opinion came when it became increasingly evident that the government was lying, especially about testing, PPE and contracts. Government minimisation of the number of deaths by excluding those that took place in care homes only added to a sense of dishonesty and cover up. The continued repetition of statements as truths, even after being found to be false and particularly those relating to testing and the discharge of hospital patients to care homes, increased the calls for a public inquiry. It was becoming clear that, to ensure the government and other relevant bodies give a proper and full account of their decisions and actions, a statutory inquiry with the power to compel witnesses to attend and produce documents would be needed.

The government’s extraordinarily complacency about the number of deaths has led to many people believing, not unreasonably, that it has been pursuing a strategy of herd immunity. The narrative that the deaths of older people in care homes were an unfortunate consequence of age rather than poor preparation and management implies that, by having the temerity to age and require public services, older people are somehow responsible for their own demise. The initial failure to publish in full the Public Health England report into black, Asian and minority ethnic (BAME) deaths, by excluding the sections relating to consultations with BAME groups and recommendations about future actions, was another example of the government ignoring legitimate concerns.

There have been no government attempts to reach out to those who have lost loved ones or who have been denied the physical presence of a family member or friend who might care for and nurture them. Indeed, by declaring that Dominic Cummings behaved responsibly when breaking lockdown rules – “I think he followed the instincts of every father and every parent” – Johnson implied that those who had not done so were neglectful parents. This victim-blaming approach and outright denial of any government errors is reminiscent of the response to the Hillsborough disaster and it took from 1989 until last year for the victims to be exonerated and public authorities to face up to their errors.

It is not that this government does not care about those who have suffered, it is that this government does not care enough about them to pause, review its actions or to and try and make up for some of that suffering by learning from it. As the government will not willingly and truthfully account for its behaviour and actions without being made to do so, a public inquiry is necessary and inevitable – costly and time consuming though that will be. Meanwhile, more rapid reviews are also urgently needed to help prevent a similar crisis in a second wave of infections.