The government's obesity strategy is rooted in a culture of 'fatphobia', of which the prime minister is as much a victim as anyone. 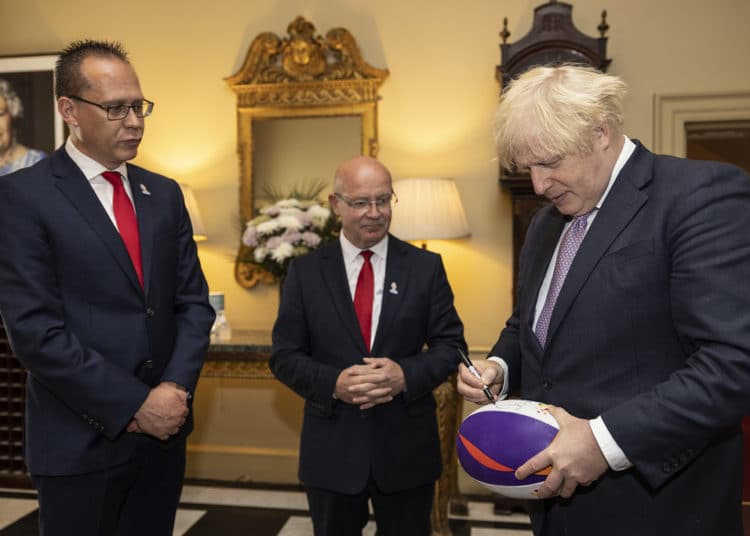 “PM Boris Johnson with Rugby League World Cup Leaders. ” by Number 10 is licensed under CC BY 2.0

On Sunday, Boris Johnson announced a new plan to counter obesity. The scheme involves the introduction of an app to track family eating habits, rewarding those who reduce their calorie intake and buy more fresh fruit and veg.

This marks the prime minister’s second major intervention on obesity, after a £10m ad campaign that highlighted his own weight and how this had affected him while he had covid. It comes on the back of interventions in 2018 and 2016, and the introduction of the ‘sugar tax’.

Indeed, the governments of the past five years have done more to reduce obesity than they have to tackle homelessness or fix social care.

To be fair on these administrations, there are public health consequences of obesity. Those with a high BMI (body mass index) are, for example, likely to suffer from cancer and hospitalisation, while their life expectancy is reduced.

Cultural depictions of obesity in Britain

However, public discourse around obesity is highly problematic and fails to address the root causes of why people are gaining weight.

Britain has long been culturally ‘fatphobic’. Body image standards have consistently correlated the thin with the beautiful since the 19th century. At the same time, stoicism was inculcated as central to British culture, and in opposition to gluttony, as an example of lack of self-control.

This made fatness coterminous with both physical and moral repulsiveness, and gluttony became a central sin for characters in popular cultures, from Homer Simpson to Augustus Gloop, not to mention Austin Powers’ ‘Fat Bastard’.

Obesity, politics, and the prime minister

Indeed, this has long been reflected in our political cartoons. Satirists have frequently used the prime minister’s weight as part of their depictions of him, in a way which correlates being overweight with being disgusting.

It is one of the few times that I sympathise with Johnson, who has undeniably been a victim of our fatphobic culture. While I may disagree with much of what he has done, no-one deserves to be shamed because of their weight.

Existing attitudes ignore the fact that genetics are a significant determining factor in obesity, in addition to stress, lack of sleep, and age. Add into this the fact that the validity of BMI as a medical term is being increasingly questioned, and it becomes clear that we are ill equipped as a society to discuss obesity, let alone tackle it.

The public health consequences of the obesity discourse

This discourse also has consequences. Attempts to tackle obesity fall into two main traps. They either label the condition an “epidemic” (as the WHO does), something which people catch randomly. Or they focus on obesity as a personal choice, trying to tackle it with ad campaigns, sin taxes, or incentive schemes.

These approaches fail to recognise the reasons for obesity. The correlation of poverty with weight gain is long-documented. Those who are food-insecure are less likely to have the time or equipment to put together a healthy balanced diet, and more likely to resort to high sugar and high-fat alternatives, which are often easier and cheaper to prepare.

In the UK, food insecurity has been directly linked with austerity in multiple studies. Poverty rates for children and pensioners have increased since 2010. Prior to the pandemic, one in 12 households, and almost half of households on universal credit, had low levels of food security.

Moreover, being active has become more difficult. Due to cuts in local government funding, hundreds of parks and football pitches have been closed, while physical education programmes in schools have also been reduced.

The conversation about obesity is a difficult one to have. Fundamentally, everyone should have the right to do what they want with their bodies, whether that involves gaining or losing weight. However, our current economic and societal constructs push the most vulnerable towards obesity, while depicting them as physically repulsive and a strain on the public sector. To truly make Britain a healthier place, public discourse needs to recognise the causes of obesity, and work to removing the stigma of the condition that is, for many, no fault of their own.