It is important for consumers to know who funds GB News, so that they can choose whether they deal with companies who fund divisive news. 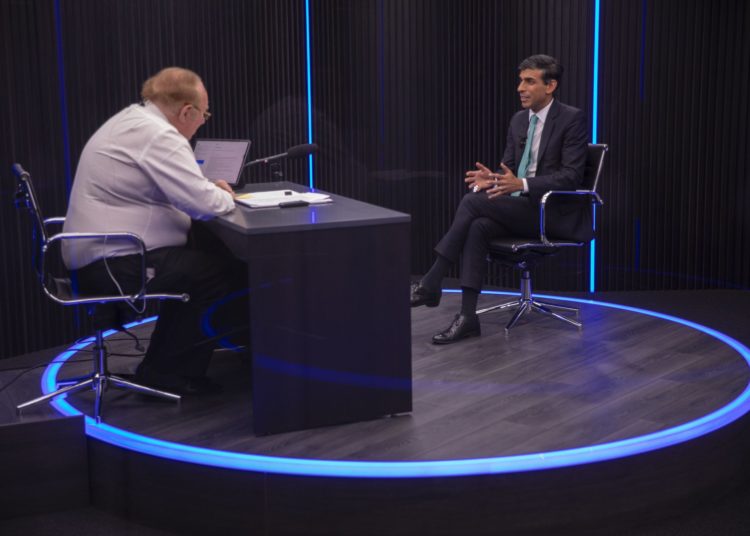 “The Chancellor is interviewed on GB News” by HM Treasury is licensed under CC BY 2.0

This week, the fruit cider company Kopparberg was at the centre of a Twitter controversy over the decision to pull advertising on GB News. GB News, a new alt-right news platform fronted by Andrew Neil, has in its opening days encouraged football fans to boo players taking the knee over racial injustice, and laundered conspiracy theories about the coronavirus. And that’s just for starters.

In a statement released on the platform, Kopparberg claimed to have had no knowledge of the ad, and said that “Kopparberg is a drink for everyone”.

Why does it matter what GB News stands for and who funds it?

As right-wing accounts accused Kopparberg of clamping down on free speech and telling people what to think, this story appeared to be consigned to the Twitter rabbit-hole.

Yet, this story does matter. Some 336,000 people watched GB News during its opening evening, more than the BBC or Sky News. Already, we have seen the influence of the more right-leaning print media in setting the terms of public debate. The saving grace of the UK’s media ecosystem was that, in comparison, our public broadcasters have always been more moderate than their broadsheet counterparts.

Yet GB News has not been set up “for all of the United Kingdom”. The platform is funded primarily by the New York-based investor Matthew Kibble, an early investor in big-data company Palantir. Campaigners, including the MP Clive Lewis, are currently attempting to reverse a collaboration between Palantir and the NHS, over privacy and human rights concerns.

Who are GB News’ backers?

Meanwhile, there are clear partisan interests in the company, as it was revealed that two Conservative lords are among its shareholders.

It is unlikely that we can persuade these backers to withdraw their investment, but it is worth bearing in mind that they are not GB News’ only source of revenue. The channel also receives advertising from a wide range of sources. The campaign group Stop Funding Hate, which has received recognition from the Daily Express and United Nations, has compiled a list of these advertisers, laid out at the end of this article.

Without their advertising revenue, GB News will have to fight to keep on broadcasting its divisive messaging. Some on this list may, like Kopparberg, have been unaware of where their marketing money was going. If this is highlighted to them, it may be possible to diminish the resources of a channel that will only make British politics more toxic.

Kopparberg was the first company to pull its ads from the site, but others have since followed suit, including Grolsch, Ikea, Nivea, the Open University, Octopus Energy, Ovo Energy, Indeed.com, Vodafone, Specsavers, LV, Bosch, Moneysupermarket and Pinterest.

The remaining companies, as of this time of writing, are listed below (thank you to Stop Funding Hate and Boycott GB News for the updated information: