Vicky Sneddon details the campaign for a fair voting system in Sheffield, having gathered the opinions of the city's MPs on the issue. 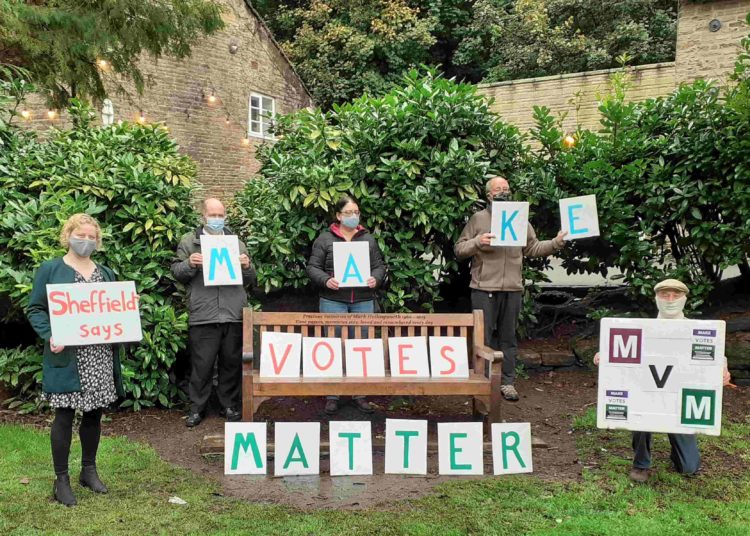 Covid, Brexit, how to ‘do’ Christmas this year; many issues are absorbing our attention just now. But there are longer-term governance issues that prevent the wishes of the British people being acted on, and these need urgent attention.

We need a written constitution, so that (for example) there is a considered, agreed and known process for making democratic changes. We need an elected second chamber, with representatives providing credible scrutiny of legislative proposals. And we need to change the way power has become increasingly centralised, putting more and more restrictions on the powers of both local authorities and local health structures. And with reduced funding, they are less able to meet local requirements.

But first and foremost, we need to change our voting system, so that every vote counts equally and that we do not end up (as now) being ruled by a government elected on a minority of votes but with a large majority in parliament. We need a system that delivers seats in parliament that largely reflect votes cast, so that our governance reflects the will of the people.

The era of two party politics is long gone. More and more voters are supporting the smaller parties. How differently our government might have addressed the covid crisis if it had been working alongside other parties rather than insisting it knew best.

Our campaign group ‘Sheffield for Democracy’ has been working with the national campaign organisation Make Votes Matter, to make public our concerns. In August, we staged a protest on Sheaf Valley Park, on the hill above the station.

Then we turned our attention to the different Sheffield constituencies, to find out where our MPs stand on the issue. That was an eye opener.

“I fully support Sheffield for Democracy’s Make Votes Matter campaign. Our democratic processes are in urgent need of review and a fairer voting system is needed to make votes count”.

She had previously written to one of her constituents:

“Disengagement from and disillusionment in politics is at an all-time high. It’s not just that the processes are failing us; our political culture is too … I support my party’s pledge for a far-reaching constitutional convention to think through comprehensive changes not only to the electoral system, but to our political institutions as well”.

Surveys show that 75 percent of Labour Party members are in favour of proportional representation. We want to see Labour committing now to how to achieve a fair voting system, not whether to.

Clive Betts (Sheffield South East Labour MP) has a very settled position: he is against PR. He tells us:

“One of the great strengths of our system is that MPs represent local areas and can argue for the interests of the constituencies they have been elected for. A PR system would scrap that connection and I cannot support it. Some people will argue that you can still have some degree of constituency arrangement but of course that cannot be pure PR because in the end there will be some divergence between the percentage of votes and the percentage of MPs”.

So Mr Betts’ argument is against a system that would count the votes across the whole country and allocate seats to parties on that basis. But that is only one way of “doing” PR.  Other choices would be a top-up system, with area or regional seats in addition to constituency seats, to provide the proportionality; or to have multi-member seats (say five or six strong) with a voting system that offers not just a vote for one person but to vote on preferences. But first, it is the principle that needs to be established:  the democratic priority being that seats won need to be largely related to votes cast. Then we will need a deliberative process to agree a particular method.

“It is my belief that the First Past the Post system …. manages to strike a sensible balance, ensuring that communities have a locally accountable representative, along with providing governments with a strong and clear mandate in the vast majority of cases.”

“Many people are disappointed by our political system and this can unfortunately lead to a sense of disenfranchisement. I believe this should be addressed as part of electoral and constitutional reform following widespread consultation with communities across the UK.

“There are benefits and flaws in all voting systems. Proportional system would allow people to vote for those they believed in, rather than vote tactically, while FPTP has a history of returning stable governments and retains a constituency link”.

So Ms Furniss is not yet persuaded, but tells us she is very keen to hear from her constituents.

The Labour MP for Sheffield Heeley, Louise Haigh, recently told one of constituents that she appreciates that millions of voters in safe seats feel disenfranchised because of a sense that their vote does not count:

“I would like to see a new long-term political and constitutional consensus developed through consultation with communities across the UK. This could be facilitated through a Constitutional Convention.

“We must recognise that changing the voting system alone would not fix the disconnect that some voters feel about our political process. I think we should therefore look at different voting systems as part of a wider package of constitutional reform to address the growing democratic deficit across the country”.

She has been in touch with us to add:

Paul Blomfield (Sheffield Central Labour MP) is strong supporter of changing to a fair and proportionate voting system. His association with the Labour Campaign for Electoral Reform (LCER), which campaigns for a more proportional voting system, is long standing. He says:

“We need a fairer system to create a healthier democracy. All the evidence from around the world shows the countries with proportional representation are more equal, with better public services and better able to tackle the big issues like climate change”.

The report ‘The Many not the Few’ (jointly published by LCER and Make Votes Matter) draws on research analysing voting systems all over the world. It shows that proportional representation is associated with fairer societies, with more equal distributions of income and higher levels of public spending.

A new development this autumn has been the launch of ‘Labour for a New Democracy’, a joint project led by Make Votes Matter. Labour Party members and affiliates are invited to take part:

The aim is for Labour to make a manifesto commitment to move to a fair, proportionate voting system, and to agree to work with other parties to bring this about. Now that would be a great step forwards…

Bait and switch: how Gove sold Brexit to Britain

Bait and switch: how Gove sold Brexit to Britain