The government is removing our right to roam, just when the need for outdoor space has never been greater. 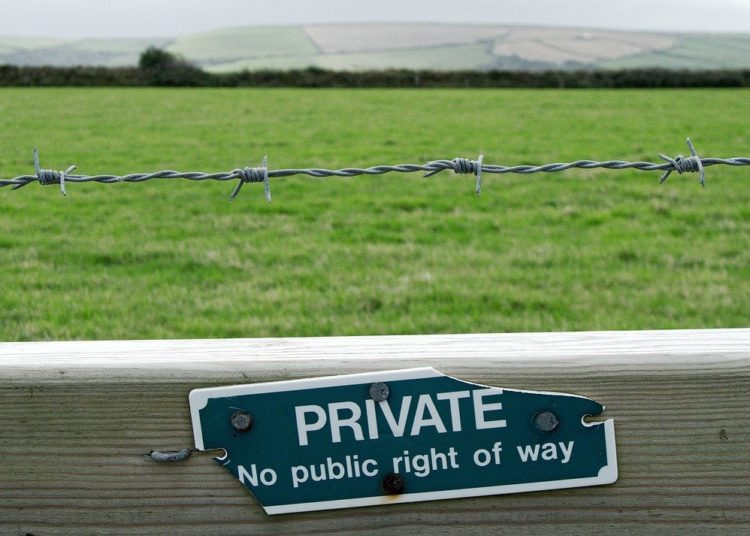 Image by Andrew Martin on Pixabay

Trespass is a curious thing. We’re all familiar with the notices, perhaps on garden gates or communal lawns, proclaiming “Trespassers Will Be Prosecuted”. These signs seem to belong with “No Ball Games” or “Beware of the Dog”. There’s a park keeper’s pettiness surrounding them, somehow, a caricature from The Beano, chasing after Dennis the Menace.

On a grander scale, country estates might display something similar, seeking to dissuade the adventurous walker from setting gumboot on soil owned by the landed gentry. In reality, their threat has historically been pretty toothless. Unless you’re causing damage, or behaving in a way likely to be deemed antisocial or worse, just committing trespass (in other words just being on a piece of land owned by someone else) has only ever been a civil offence. As such the police have no powers of arrest and although action could be taken against you by the landowner, who could seek a court order, the likely outcome might be a disgruntled conversation and a promise to be more careful next time.

This, though, could all be about to change.

Buried away in the Conservative Party’s election manifesto in 2019 was a promise to “make intentional trespass a criminal offence”. And now, in the middle of a grossly mismanaged pandemic, when a need for the big outdoors has arguably never been more important, the government is beginning to act on this particular pledge, meaning even less of the UK’s land could be available to us than is currently available.

Even less? But what about the freedom to roam? Surely everyone’s right? In England and Wales, the Countryside and Rights of Way Act (CRoW) was introduced in 2000, allowing the public access to just 8 percent of English land and a mere 3 percent of its rivers. Or to put it another way, under current plans you could be liable for prosecution, leading to a criminal record if convicted, for knowingly walking on 92 percent of England.

The author and illustrator Nick Hayes discusses this at length in The Book of Trespass: Crossing the Lines That Divide Us, a book I lauded as a favourite of 2020 for Yorkshire Bylines. What becomes clear through reading this book is not just how much of England is denied to us, but how so much has come to be so denied: by privatisation, by theft, by stealth, by force. By, as Nick Hayes calls it, the unacknowledged history of land enclosure in England.

The Right to Roam campaign is also putting its weight behind efforts to gain more, rather than less, access to the countryside. In a letter to the prime minister in November 2020, signed by over 100 authors, actors, musicians and artists – including such prominent names as Jarvis Cocker, Mark Rylance and Ali Smith – the campaign urged Mr Johnson to extend the CRoW Act to cover woodlands, rivers and green belt land, increasing our collective right to roam.

Such was the impact of this letter that it was picked up by the Financial Times, including a quote from the Department for the Environment, Food and Rural Affairs, stating that “public access is key to connecting people with the environment to improve health and wellbeing”. Maybe the tide is turning? Not a bit of it. A petition against the proposed changes to trespass legislation organised by the Right to Roam campaign seems to have so far fallen on deaf ears, despite gaining 134,000 signatures.

Indeed, as journalist and campaigner George Monbiot claimed in the Guardian, the proposals to criminalise trespass create “one of the most severe restrictions on freedom in the modern era”. The consultation which led to the proposal, Monbiot claims, was slanted in the direction of a preferred outcome from the start, using prejudice against Roma and Travellers to frame an argument that could have severe repercussions for us all. And it’s not just wandering over rural idylls that becomes affected. Trespass also affects city centres, criminalising the homeless with literally nowhere else to go. After all, as Monbiot notes, it was David Cameron’s administration that made squatting in empty houses, previously again only a civil offence, into a criminal one.

In our own region, much of what appears to be “our land” is actually owned by private corporations or individuals. For example, the National Park Authority owns less than one percent of the North York Moors, with some 80 percent in private ownership. A study by the Yorkshire Post in 2018 found that around a third of Yorkshire is owned by corporate and commercial interests.

Given the small percentage of English land that is actually ours to walk on, and the propensity for privately owned land to affect not just those with a right to develop it but those surrounding it too, as witnessed by the ongoing battle in the Calder Valley with landowner Richard Bannister, it is in everyone’s interests to oppose the current government plans. Much is made of the phrase “land grab” in political commentary, arguing against seemingly impulsive or opportunistic bills. In this case, the meaning of the phrase appears to be a literal one, and is one that could make criminals of us all.

More information on trespassing laws can be found HERE