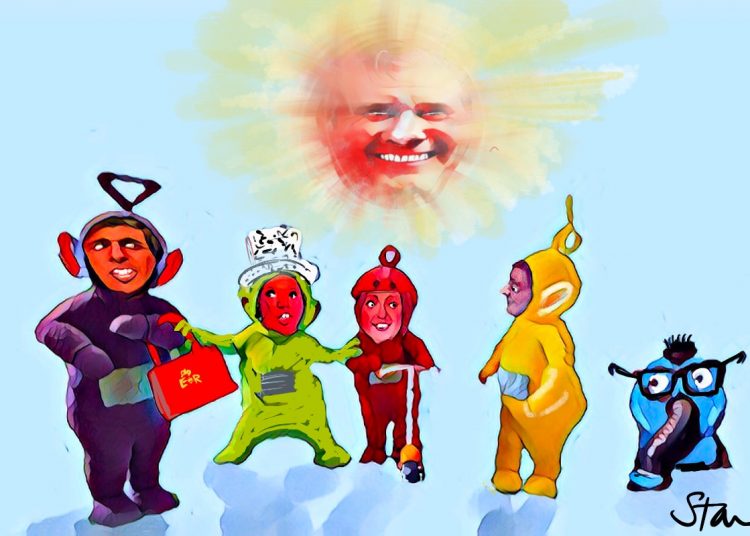 The candidates for leadership of the Conservative Party are struggling to find something appealing to say as they strain to distinguish themselves from each other. Their pitches are mired in unsupportable claims and contradictions. Any defining contrasts are in short supply.

Johnson’s legacy is plain to see. In his brief, deception-filled, ‘it’s all about me’ premiership, he has damaged the country, our democracy and his party. He’s left few successors capable of repairing the wreckage. Johnson’s legacy to the country is a chaotic, strategy-free zone. Finally, the grease has dripped off the piglet and left a nasty stain on the floor of our political life. Despite tenuous attempts at contrition, few signs of shame, genuine regret or apology come from the candidates.

Like reluctant witnesses to an accident they helped cause, they can’t walk away fast enough – all the while claiming to stand for integrity, honesty and trust. They should remember that beyond the MPs, 160,000 Tory Party members along with the wider electorate have the CCTV footage and bear the scars of the last two and a half years to refute their claims. The candidates can try and fool at least some of their weary and beleaguered party, but they can’t fool everyone else.

Exhibit A: peddling truth, integrity and trust while traducing them

With gratitude and apologies to Shakespeare:

Resignation day: ‘I come not to praise Johnson but to bury him.’

The unseemly switch from resignation day to restoration day is impossible to square with notions of truth, integrity and trust. It shows how the Johnson policy of ‘say whatever it takes to deceive as many people as you can’ has become ingrained in just two and a half short years.

Field Marshall Liz Truss (aka foreign secretary) claiming that she is playing a major role in combatting the savage Russian hostility in Ukraine and standing up single-handedly to Putin is a distortion too far and an insult to the Ukrainian military and civilians who every day are being butchered in their hundreds. What happened to truth and integrity there?

Exhibit B: sound and fury signifying nothing

This will be the fourth prime minister the country has had in six years. If this were happening in Italy we’d be pointing to it as evidence of the inherent political instability of their system. The UK’s version of inherent instability has come, for now, to sit within the Conservative Party. Comparing the pitches of candidates claiming to be the next answer to the leadership problem, it’s striking that the party is in a fix of its own making.

Far from being a broad church, they’ve allowed the ERG to ambush them and drive them into a narrow cul-de-sac of extreme right-wing convictions. This sees the contenders pledging allegiance to the hard-right agenda while loudly proclaiming a small number of tired, go-to Tory policies for the consumption of the broader party membership. Stuck in the cul-de-sac, they are revving the engine furiously to create the impression they are moving forward while being fearful of reversing out.

Contradictory noises are also made about still getting Brexit done while claiming Brexit is already done and relying heavily on ‘the opportunities of Brexit’ that still seem to be in very short supply after SIX years of unfulfilled promises. Our former leader has piled in with this contradiction on the Daily Express’s front page: ‘Boris message to next PM “You must finish job on Brexit”’. So it’s not done then.

“I can crush the Scottish nationalists.” (Penny Mordaunt)

There is an extreme strain in some recent Conservative rhetoric that arcs dangerously close to a covert English nationalism. Set in stark contrast to more wholesome notions of patriotism, in its most pathogenic form it views other identities as suspect, invalid, indulgent and subversive.

Such a reactionary stance holds that Scottish civic nationalism must be crushed, while traditional English ethnocentric nationalism must be pandered to. It seems that the home countries now serve as territorial residues of empire that England is entitled to tell what to do while being paranoid about others doing the same to it. Take back control is legitimate for the English, not the Scots. To exemplify how the English exceptionalist’s lens distorts, consider:

“I’ll get rid of the woke rubbish.” (Suella Braverman – now eliminated from the competition)

In essence, woke is about being sensitive to the needs and life experience of people unlike oneself. Rubbishing woke is tantamount to saying ‘I’m not willing to use my imagination or give any credence to human experience that doesn’t accord with my own. Nor will I accommodate the interests of people who don’t have the same circumstances or view of life as me’. To ‘get rid of woke’ is denigrating the lives of millions of people for not being right wing enough.

As the Overton window has shifted further rightwards, many conservatives have been subjected to the same unwarranted vilification. Creeping fascism is another term for anti-woke. Leadership contenders cannot realistically claim they want to heal divisions, bring people together, much less own the idea they are a one nation party, while they ridicule being woke. 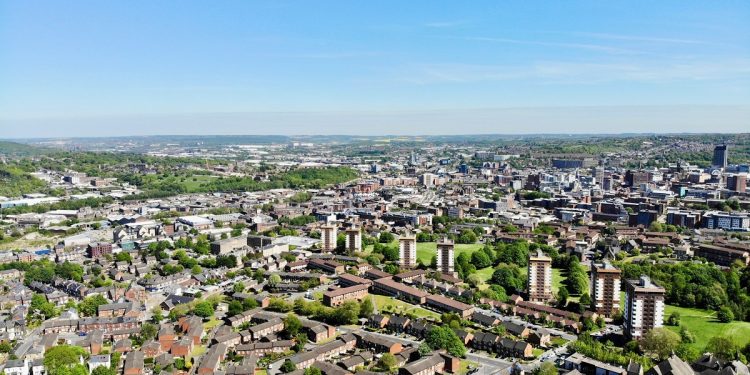 In the general thrust of candidates’ promises ‘we must go back to being Tories’ features prominently. The Tories’ old hits of ‘low tax, small state’ are being urged upon us. Simultaneously ‘More of the same won’t do. We must modernise’. So modernising by retreating to the past it is then. Everyone’s happy, or are they?

It is axiomatic amongst ideologues of all political persuasions that failed policies don’t fail because they are not effective but because they weren’t implemented aggressively enough in the first place. So a failed policy does not produce intelligent reflection and changes in thinking but a double down on the policy.

Holding up low taxes as a panacea is like insisting that to get traffic moving cars must be driven quickly whatever the traffic or weather conditions. It denies the potential carnage that follows and stops the traffic moving altogether.

Several experts on national economies from a variety of backgrounds have come forward recently to explain for the benefit of Tory party candidates that, contrary to the accepted membership mantra that low taxes are the answer, lowering taxes is inflationary. In mitigation, Rishi Sunak cautions when, not if, on tax cuts, Kemi Badenoch argues tradeoffs are needed. Richard Murphy gives a clear account of the role of government in an economy and the effect of cost increases. A paraphrase follows of his linked twitter thread above:

Smaller state requires fewer services being provided by government. The demand for services doesn’t go away and the private sector steps in to provide the present and all future services with the added requirement to make a profit. Costs to the consumer therefore rise. In a cost-of-living crisis the small state and reduced taxes are the opposite of what is needed.

Like the old Thatcherite adage that wealth trickles down (spoiler; it surges up) the equivalent panaceas are hard to shift once they get into the mindset of any political party as being ‘who we are’. The experts argue that higher taxes are the best way to control inflation and so reduce cost to the consumer. Meanwhile the ‘common sense’ of party ideology tells them the reverse is true. This is where honest, competent leadership should intervene to change the thinking. It was the hottest issue in the recent TV debate – illustrating the rift between ‘common sense’ theory and the practical reality that the informed experts pointed out recently. This is one opportunity for truth and honesty to prevail – whoever wins the leadership campaign.

Exhibit E: I can seem as close as you like to Boris Johnson

One line is ‘He achieved a lot we can be proud of’ followed by spurious claims of credit for things not attributable to Boris Johnson and the well fact checked old chestnut that he got the big decisions right. Translation: ‘For those of you who think Johnson was a wonderful prime minster I’m your Johnson light-ish candidate’.

Then there is ‘Boris has admitted mistakes were made’. The use of the passive tense in that statement shows how incapable they are of telling the most obvious truth. Johnson was a world-beating liar who tarnished our international reputation and made Britain fake again.

Finally, there’s ‘I was concerned about how Johnson behaved but stood by him out of loyalty’. This means: ‘For ages I decided his public appeal was in my interest because it was more likely to keep me my seat as an MP. When that expectation no longer held sway, my conscience/ fear of losing my seat (delete as appropriate) overtook me and I felt he should be drummed out of office. Now he’s gone I’ll claim a profound respect for him in case you think he was a good thing. Did I mention we need to restore trust and integrity?’

Exhibit F: the panel of candidates on the televised debate

There are no contenders with the intellectual heft, experience, exciting ideas or honest communication skills to transform the fortunes of the party, much less the country. We are more likely to get ‘Johnson – the sequel’ than the genuine new start they all aspire to – at best a continuity agenda without so much of the lies and blagging. The choice of candidates for leadership is now in the hands of what is supposedly one of the most sophisticated electorates in the world.

This electorate was the same one that anointed Johnson as leader less than three years ago. Their reputation for sophistication has been somewhat dented in the intervening period given it was widely predicted by those who knew him well, or those who viewed him from afar, that Johnson would be a disaster. They’ve had lots of practice in electing leaders in the recent years.

We can only hope the Tory MPs have become more sophisticated as a result of their recent experience. They’ll need to plumb the depths of their sophistication and divine some deeply hidden talents from amongst the candidates in front of them today. It will require substantially more than displays of Union Jacks. Let’s wish the MPs well.