If our foreign policy is motivated by stamping out sexist policies inflicted by unpleasant regimes, why were we selling arms to Saudi Arabia? 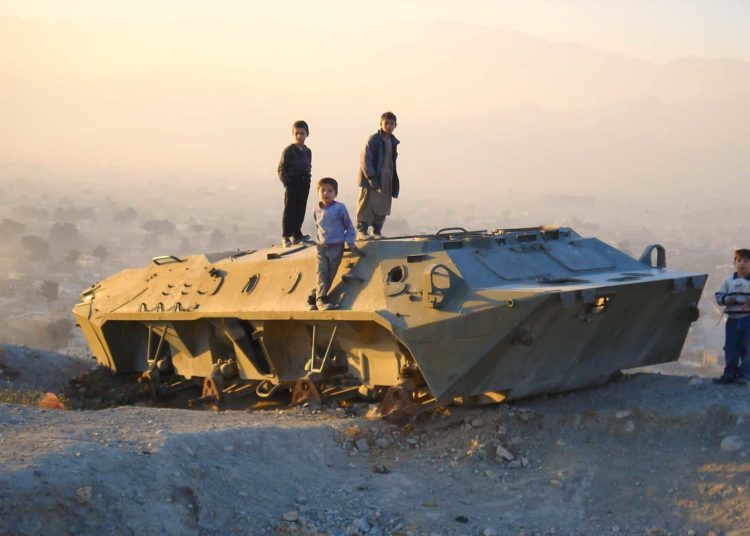 Kids on tank, Kabul, by swiss.frog is licensed under CC BY-NC 2.0

I am not a pacifist. I decided that the first time I met someone who was an out-and-out racist. There are people with some truly horrible views that it’s possible to hold a discussion with and hold out some hope of achieving a change of mind. There are others who are convinced of their own superiority who are quite prepared to use violence to impose their views on others.

When it’s right to fight, and win

Anyone who studies the treatment of Jewish people, or Romany communities, or gay people under Hitler must surely understand that it was never possible to reason with Nazis. The right thing to do was to fight and win. When it comes to racism or sexism, every community harbours its unpleasant elements, and force is sometimes necessary to deal with unpleasant realities.

I therefore have massive respect for the hundreds of young people who went out to Afghanistan with the aim of helping to fight a repressive regime and the desire to foster every opportunity to build a better and a more open-minded way of life in that country. When a country’s politicians tell troops that they must go into harm’s way for a cause, those troops deserve full support from us all for taking risks on behalf of our community.

But we’re entitled to ask whether the decisions of the government that sent them into harm’s way were well made. Commentators have queued up recently to condemn Britain for leaving Afghanistan in such a chaotic and ill-thought-out manner. Far fewer of them have bothered to question whether it was a good decision to send troops there in the first place.

Afghanistan: a confused and unclear mission

Twenty years ago, the Green Party was the only English political party of any size to say that it was a bad idea to intervene in Afghanistan. I agreed. The US and its allies went in with a confused and unclear mission and then constructed a narrative about championing women’s rights and freedom as a justification of their decision, rather than as a clear and consistent policy aim that was applied with equal force across the world.

Elsewhere in the world a completely different policy choice has been made by the British government. All the largest political parties in the UK are complicit in selling arms to Saudi Arabia. It seems that if the regime has enough oil and gas reserves our government turns a blind eye towards appalling treatment of women and the funding of extremist ideology.

In Afghanistan the theory was that we could persuade people to adopt more liberal values by summoning up air strikes. Sending troops in full battle dress to walk through remote Afghan villages in fear of their lives was never going to be an easy way to win hearts and minds. However friendly and enlightened the soldier behind the uniform is, it won’t be obvious to those looking at the sharp end of the gun. It is incredibly hard to win a propaganda war after you’ve arrived by helicopter gun ship.

Is it any wonder that 20 years of confused and half-hearted efforts to use military force failed? Particularly as they took place thousands of miles from home in territory where the British empire at its height couldn’t impose its will when it was using machine guns against flintlocks. A place where the Soviets at their strongest lost badly.

A war must be morally right, and it must be won

When fighting wars, it is always sensible to ask two very important questions. One is whether the war is morally right. The second is whether it can be won. If the answer to the second question is no, then it is most unlikely than anything morally helpful will be achieved by fighting and losing.

When the United States was fighting the war in Vietnam, its people were told that it was the only way to stem the tide of absolutist communism and to maintain freedom. Within 20 years of losing, coach parties of American veterans were touring the battle sites and sitting in roadside cafes in Ho Chi Minh City. What those veterans saw may not have been an ideal democracy with a free press and free voting, but it was very different to the vision of hell they and their friends were told to ‘kill and be killed’ to prevent.

Few people in Britain have the remotest liking for the Taliban. Their policies are horribly and deliberately anti women and the polite spokespeople who are mouthing assurances of fair Islamic treatment of women are accompanied by other factions that will never let a woman leave the house unless she is completely covered and under the control of an accompanying man. Their treatment of anyone who is gay or who speaks out for trans rights will be even more brutal.

Have we weakened the cause for freedom?

Does our hatred of their policies mean that we have been wise to take up arms against them? Might we not have achieved more, done so quicker, and established something more secure and stable by using our riches and the lives and health of our young people and the Afghan people a little more carefully? Like focusing our efforts exclusively on our aid programme.

Over the last 20 years, 457 British service personnel have lost their lives in Afghanistan. Some £27.7 billion has been spent by Britain and $1 trillion by the US. During that time, hundreds of thousands of Afghan people have lost their lives. Were the major political parties right to send British troops into harm’s way for so very long to achieve such a predictable and humiliating defeat? Or have we allowed a knee-jerk reaction to the horrors of 9/11 lead us into a huge mistake that has weakened the cause of freedom?