Wapping – The Workers’ Story is a film about the momentous year-long industrial dispute which began in 1986 when Rupert Murdoch plotted to move production of his papers overnight from central London’s Fleet Street to a secretly equipped and heavily guarded plant at Wapping, a docklands district in east London. 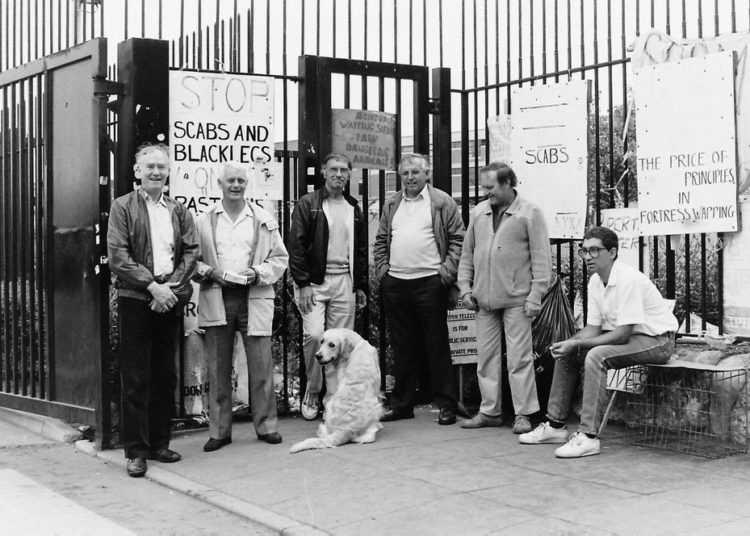 '6 men and their dog' by Nic Oatridge

The Wapping dispute began 35 years ago. It was a lock-out, not a strike.

Wapping – The Workers’ Story is a film about the momentous year-long industrial dispute which began in 1986 when Rupert Murdoch plotted to move production of his papers overnight from central London’s Fleet Street to a secretly equipped and heavily guarded plant at Wapping, a docklands district in east London.

5,500 men and women lost their jobs and centuries of tradition in one of London’s last manufacturing industries came to an end. Military-style police tactics, the use of new laws which shackled the unions’ hard-won freedoms and strike-breaking organised by the electrician’s union led to a Murdoch victory.

The dispute had international ramifications for Murdoch’s expanding press and broadcasting empire in the United States and around the world. It took place as the Thatcher government embraced monetarism – deregulating finance, privatising key industries and undermining local democracy.

The story is eloquently told by sacked printworkers and the ‘refusenik’ journalists who joined them. It was made with the News International Dispute Archive group whose publications, website and travelling exhibition gave a voice to the sacked workers and their families on the 25th anniversary of the strike.

Both the creation of the archive and the production of this film are tremendous achievements; testament to the determination of those involved in the projects to provide vivid personal accounts both of the distinctive culture of ‘working in the print’ and their experiences during the dispute.

Director Chris Reeves has a strong track-record with Platform Films, making documentaries in support of the trade union and labour movement. They made ‘The Lie Machine’ in 1984, for the Miners’ Campaign Tapes, a project involving other independent film-making groups.

One section of the documentary deals with the solidarity of Fleet Street with other trade union struggles. In 1972, all Fleet Street newspapers closed when five dockers – ‘the Pentonville Five’ – were jailed, and during the 1984/85 miners’ strike printworkers not only raised over £2m is support of the striking miners and their families but also actively challenged the extreme bias in the way the strike was covered in the predominantly right-wing press by demanding ‘the right of reply’.

One example: John Brown, Imperial Father of the Chapel in the Composing Room at the Sun, had fierce battles with the foul-mouthed, bullying editor, Kelvin MacKenzie, on this issue. Brown was involved with a group of National Graphical Association progressives and the Campaign for Press and Broadcasting Freedom (CPBF), and during the miners’ strike his nickname became ‘right of reply Brown’. “All I tried to do was get some balance. It was the best year we had”, he said.

The great strength of this new documentary is the way it cuts from contemporary newsreel footage to interviews with former Wapping strikers. These interviews are structured around particular themes (in the print, Murdoch, the role of the police, the media …) with the people often speaking against the backcloth of their union or chapel branch banner.

Wapping was located within a packed Docklands community which also suffered the impact of the scab lorries driving out of Wapping. It was good to see CPBF stalwart Mike Jempson in the film describing the solidarity action taken by Wapping residents in support of the striking printworkers.

Wapping: The Workers’ Story was funded by donations from trade unionists. It deserves to be widely shown. It helps us to understand how it was that Rupert Murdoch began his remorseless rise to global media power as a result of Wapping, but it also punctures the false claims he made that breaking the print unions would lead to  more newspapers and a diversity of viewpoints.

Gibraltar, Brexit and Schengen: it’s all about the border