Unmasked, in retreat, and ruining the planet. This week we saw evidence first hand of the lessons ignored by the outlaws in parliament 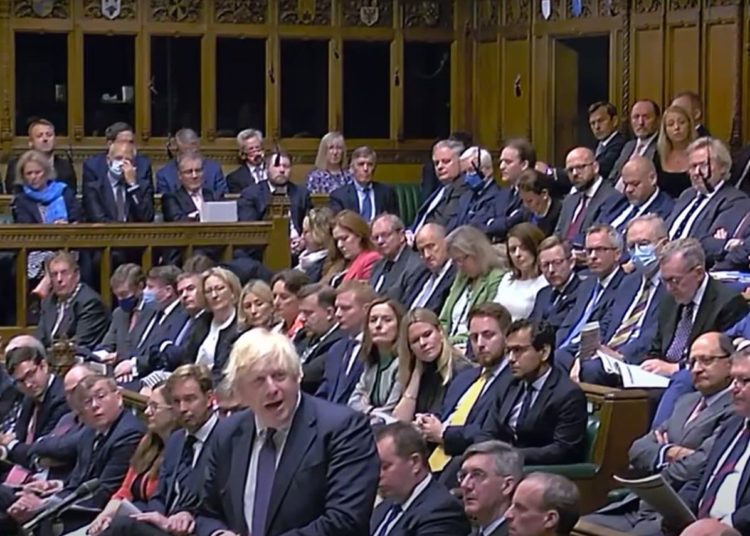 They sat, shoulder to shoulder, recalled to parliament from their holidays, some like Raab from distant lands where they had flown, not caring about their ‘heavy hoofprint’, unmasked Tories. From the Irish Gaelic word tóraidhe, its meaning of ‘outlaw’ or ‘robber’ remains their outlook. On the benches opposite, the other parties by and large accepted the Speaker’s request to wear masks.

The reason for wearing a mask in this pandemic has been to care for those nearby: to help prevent the spread of this dreadful disease. While it is only partly helping to do so, it at least shows some consideration for others to wear a mask.

However, the ‘outlaws’ sat together, unmasked, taking pride in not following the science.

John Redwood gave excuses in support of his leader – the party ‘line’ – but unconvincingly. Theresa May, in her powerful speech asked where “Global Britain” was in all this. Other Tories and members of the opposition who had served alongside, and among, Afghan people were powerfully critical of our less-than-caring foreign policy and clearly moved by our failure. Good for them – and shame on the party line.

Of course, it is not simply Britain that is at fault, if anybody is to blame. Our western ally, the US, has failed a whole country. The ‘West’, and the Russians, have failed repeatedly, since at least the 19th century, to understand this more than troublesome region of the planet. The chief of the defence staff in an interview on BBC Radio 4 reminded us to “learn from our mistakes”. Surely, we had made enough mistakes before now, and could have learned something from them?

I was reminded of our involvement in the Middle East, and Laurence of Arabia’s unconventional approach. Or that of Orde Wingate, in Burma. Maybe even our experience of the Khyber Pass in the 19th century. But no: ignoring the lessons from history, we simply continue to bomb our way to victorious defeat.

Lounging on a beach in Crete while Kabul burns may be a good classical reference for (not) learning from history, but it does not bode well for the people of this country, or Afghanistan, or indeed the so-called Western ‘democracies’.

Climate change: one last chance to follow the science

I am no military tactician, nor politician. Simply an aging citizen of a once-caring country, watching events unfold. We may be losing to the Taliban. We are possibly about to lose against the SARS CoV2 virus, as is happening in Israel where the Delta variant is riding roughshod over the vaccine.

We are also losing against climate change. A recent study has demonstrated that perhaps we now accept that climate change is real but are less than willing as humans to change our ways.

With COP26 only weeks away, rather than sitting on the benches – unmasked and at close quarters, yet claiming to be “guided by the science” – our ‘leaders’ in their wisdom could stop adding hot air to the climate with their empty soundbites, and actually ‘do’ something. Stop leading – from behind!

Oh, and get out of your gas-guzzling SUVs.

Paul is a retired physician with an eclectic career, including dermato-venereology during HIV/AIDS pandemic, public health, respiratory medicine, GP, a cold warrior with four years as a first secretary in Moscow, watching Andropov, Chernenko and Gorbachev. He was a farmer in Canada, a long-term Green activist since the 70s, and even a 'soixante huitard' long ago ('68', of course) in Paris.