Johnson's 'Global Britain' runs shy of alliances, hides behind ‘our Allies’ and seems to play follow-my-leader to the US. 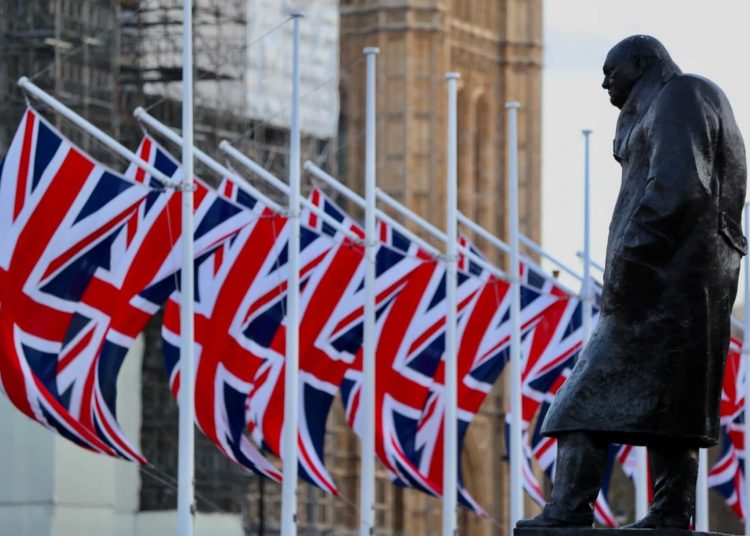 Image of the Churchill statue in Parliament square, flanked by Union flags, image by Kristina G on Unsplash

The crisis in Afghanistan highlights the historical ambivalence in the Conservative Party to taking sides. Global Britain under Boris Johnson runs shy of any alliances, hides behind ‘our Allies’ and seems to play follow-my-leader whenever the American president gives us a wave.

The reasons for this pre-date the UK joining the then European Economic Community (EEC) in 1973. Britain’s first attempts at joining in the early 1960s were rebuffed by the then French president, Charles de Gaulle, who was convinced that the UK had two identity problems: first, reconciling itself to its loss of status as a great power after 1945, and second, its inability to understand geography in a nuclear age.

Britain had yet to realise that geopolitically it was part of Europe not part of the North American continent, and act accordingly.

The illusion that Britain was still a great power after the end of World War Two has impaired its (mainly Conservative) post-war governments’ ability to adapt its foreign policy to match its capabilities, rather than its ‘great power’ exceptionalist rhetoric.

The roots go back nearly 80 years. At the end of WWII, Britain claimed that it had a ‘special relationship’ with the USA that made it superior to, and stronger than, its European neighbours. As such, it stood aloof from joining its near neighbours when they launched European integration projects that started in the 1950s and grew ever stronger. It felt strong enough to be ‘independent’, on paper at least.

This changed after the Vietnam War in the 1960s, when Labour governments saw Britain’s future as being inside Europe, pragmatically influencing and shaping its policies. And, if necessary, sharing that role with France and a nascent, powerful Germany. For all their internal divisions, Labour governments have done that, but Conservative governments jettisoned that with Brexit.

France had initially shared with the UK a sense of superiority and exceptionalism after the war, but pragmatically aimed to shape a future strategic vision for Europe. The French first came up with, and then ditched, the idea of a federal European Army in 1954 – ditched, because some argued that it would curtail French independence and require greater political integration with the other five members of what was shortly to become the common market – the EEC.

The idea of an independent security role for Europe was taboo and has taken a long time to materialise. The EEC always insisted that Europe was essentially a domestic peace project; the EU had neither military aspirations nor capacity, and really did not want to be involved in military operations. It presented itself as a civilian power, and one only able to join in humanitarian and peace missions under the UN.

Defence cooperation in the EU was to be given a stimulus by former Conservative prime minister, Margaret Thatcher.

Mrs Thatcher strongly backed the creation of the European single market in 1985, and with it, greater defence cooperation among EU members. Within a few years, the Berlin Wall had been ripped down, Germany reunited, the Yugoslavian civil war ended, and members of Comecon (the Soviet Union’s Eastern European cluster of states on its western borders) were eager to join the EU.

Much was made of the argument that harmonising weapons, resources and goals made economic and strategic sense. Domestic and American military equipment manufacturers, however, were less keen. Even so, small steps went ahead as countries drew on their national armed forces to work together outside NATO ad Western European Union, and more closely with each other inside the EU. British foreign policy positions increasingly diverged from those of the USA, notably on international affairs.

Since the 1980s, EU-based military cooperation among its members has grown. Anglo-French naval cooperation was progressing well until Brexit, and mutual interests had been consolidated on defence matters as well as more widely. Even so, the idea of an EU army or defence force had been stalled, largely because ‘defence’ implies that the EU has its own territory to defend militarily and a defence minister to assume overall political responsibility for all decisions.

And for historical reasons, EU states do not subscribe to using arms to solve disputes between themselves. Nor do they seek power to intervene outside the EU in any capacity other than in support of the UN, within NATO or, more vitally, for humanitarian reasons.

From civilian power to peace-keeping and crisis humanitarian relief

The idea that the EU should provide mutual cross-border assistance for civilian disaster relief evolved from EU countries pooling their resources and working together. They found that acting alone was not always the best way to deal with crises at home and abroad. In 1992, under French Commission President Delors, the European Community Humanitarian Aid Office (ECHO) was set up.

It sent relief immediately to Haiti this month. At the same time, its members were helping combat forest fires in Algeria, Greece and the Mediterranean. It had already given Afghanistan €57m in humanitarian support, such as emergency health care, critical relief assistance to the most vulnerable including the victims of war, forced displacement and natural hazards.

Interventions focus on providing emergency health care, shelter, food assistance, access to clean water and sanitation facilities, as well as various protection services targeting women and children. The EU’s emergency response mechanism ensures timely emergency aid to recently displaced people. It is not perfect, but it seems inconceivable that the world leaders and the UK could not have known how dire the situation was for ordinary people in Afghanistan, given this kind of ongoing work.

The EU’s security taboo has been broken. July 2021, it inaugurated a new €8bn security fund to improve the procurement of equipment and better use of resources for common purposes. This is seen as a tool, necessary to give credibility to any claims or vision of the EU having a role to play in its own right in international affairs.

The crisis in Afghanistan has shone a spotlight on the shabby grubbiness of the ‘global Britain’ soundbite, which has become the emptiest of deluded self-important slogans. It has been a convenient cloak for the past 11 years of Conservative governments’ increasingly ill-judged insularity, and batty claim that the UK could be independent (because it was so great) in an inter-dependent world.