There's still a strong appetite for UK relations with Europe to remain cordial. For decades there has been beneficial diplomacy. 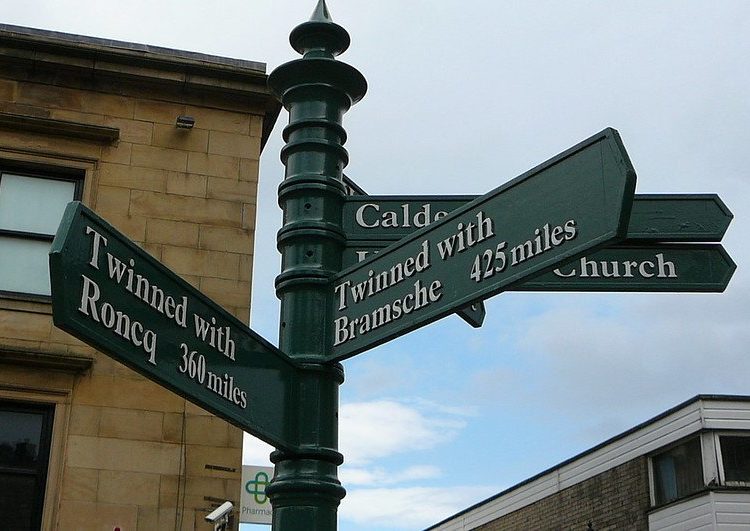 "Very Long Distance Footpath, Todmorden" by Tim Green aka atoach is licensed under CC BY 2.0

‘Bottom-up’ could be the best way to revitalise UK relations with Europe, though we’ll have to work twice as hard to do it, and with half the resources. This was the resounding message from city and regional officials from across UK and Europe in the latest gathering for Keeping Channels Open – Beyond Brexit, supported by the German liberal leaning Friedrich Naumann Foundation.

With local elections in May, advice to candidates concerned about broken ties was clear: bypass Westminster, maximise city diplomacy, and build your own cooperation agenda with Europe.

UK cities have a long history with Europe

Up for debate was how far UK cities, regions and nations can maintain productive links with Europe, despite the centralised policy of disengagement. An independent approach would fit with the drive for empowered local governance and stronger sense of community since the pandemic.

As local authorities take more control of their recovery, green initiatives and local transport – as well as the levelling up agenda – then why not relations with Europe? Would a closer approach depend on funds and devolved powers or political will and public support?

The answer from all local officials, including mayors, was consistent: the UK’s national approach does not have to dictate our European relations. There are many European projects and initiatives we can still take part in.

As one Italian mayor affirmed:

“No separation agreement can delete centuries of historic relations between cities and people’s relations. Let’s remember that in history, states and borders might change, but cities can stay connected.”

Indeed, officials from UK cities and the nations of Scotland, Wales and Northern Ireland outlined ambitious strategies to stay connected to Europe and address challenges together. These ranged from expressions of political support for EU, to practical help to local business and sectors in creating links and easing Brexit frictions.

Strong economic and cultural ties, including youth exchanges, can be made directly between regions, affirmed an official from North Rhein Westphalia, Germany’s most populous lander, with historic ties to Britain.

But without the tools afforded by EU membership, the challenges will be undeniable. Some things can never be replaced, like full access for services and freedom of movement. Cities and regions will need to double down on activities and networks to keep connections alive.

One network highlighted as ripe for expansion to more UK cities is Eurocities, which brings together some 200 European cities from 39 countries to share knowledge, cooperate and enhance city powers. So far, 17 UK cities belong, and their mayors recently pledged to stay part of the European family.

At the regional level, the EU Committee of the Regions (EU-COR) is also now being used as a forum for UK’s constituent parts to lobby for improvements to the UK-EU deal.

And the Assembly of European Regions has also been hailed as an effective network to facilitate contact between companies and people. A Dutch official said it would mitigate the effects of “these politically motivated barriers and borders – drawn up for no good reason”.

Devolved UK nations and their ties to the EU

Though Scottish efforts to remain part of Erasmus Plus failed, Scotland has pledged to deepen links to Europe through institutions, such as a European Friends of Scotland group, backed by an alignment agenda and strong cultural programme.

Wales has set up its own Erasmus replacement, and called for the UK government to engage more constructively with devolved administrations and deliver on the deal for all parts of the country. An open letter from the Welsh first minister to the European Commission committed to maintaining historic connections with EU institutions, and working on shared objectives like the environment and equality.

The Welsh change of heart since the Brexit vote means there is now a real nation-wide sadness about lost relationships.

Despite its vulnerability, Northern Ireland’s special situation was viewed as an advantage. The retention of the EU Peace Plus program demonstrates the ongoing commitment of EU nations to cross-border peace and development on the island of Ireland. Northern Ireland should creatively exploit all three avenues for positive cooperation with Europe – British-Irish relations, North-South relations and UK-EU dialogue.

One key model to revitalise is twinning – an old-fashioned concept of matchmaking UK and overseas towns and cities on a range of projects. This could generate vital links in the post-Brexit era. A former mayor of Bath, Marian McNeir, highlighted the benefit of these strategic partnerships. The infrastructure is there, she said – we need to use it and expand it.

While Brexit is still divisive in some areas, the appetite exists for Britain’s cities, towns and regions to carve out their own positive relationship with Europe as part of local recovery and development.

Outward-focused strategies, revamped twinning partnerships, and dedicated networks can facilitate European connections, backed by the confidence to deviate from Westminster’s path of separation.

As a Birmingham Council representative concluded, it’s all about writing your own story.

“As cities and regions, we need to take control of our own narrative, not rely on government to define it for us. We no longer need to rely on nation states to address global issues like climate change and the economic recovery – solutions can also be driven by cities and regions, including in the UK, working not in isolation but in cooperation with European and global counterparts.”

Sandra is a political and strategic communications adviser in conflict zones, working on behalf of international organisations like the UN, NATO, ICC, EU, OSCE and UK government. She is currently directing a new initiative called Keeping Channels Open, supporting channels of cooperation between UK, Europe and US in the post-Brexit era.