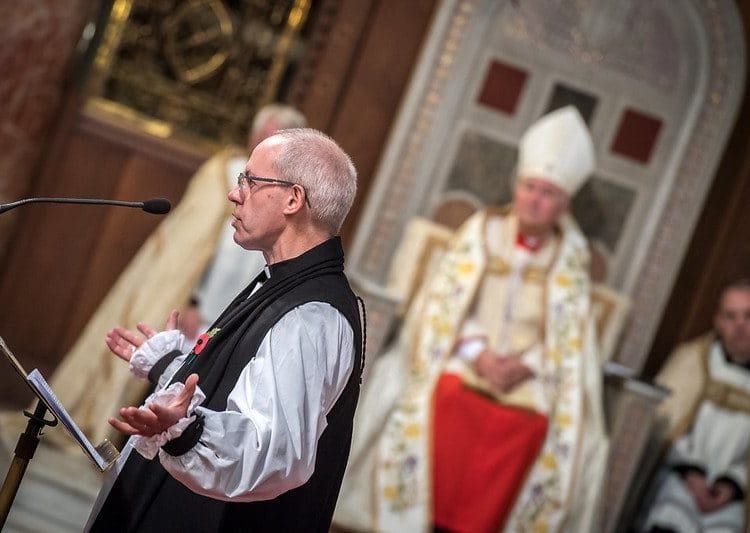 Vespers with closing of Door of Mercy - Preacher, Archbishop Justin Welby by Catholic Church (England and Wales) is licensed under CC BY-NC-SA 2.0

The headline “Top UK bishops slam ‘disastrous’ bill” reverberated around the world, making news in the media across the United States and Canada, in India, China, Australia even Korea and Japan.

It was global news because the foundation of democracy, the rule of law, was threatened. Britain was proposing to fatally compromise her integrity and reputation for respect for the law, which had been painstakingly built up over centuries. The Westminster legislature is considered the “mother of parliaments”, yet it is considering breaking the law.

Leading UK bishops declared the “disastrous precedent” had “enormous moral as well as political and legal, consequences”. The attack on the proposed changes to the withdrawal agreement was led by Justin Welby, Archbishop of Canterbury, supported by the Primus of the Scottish church and the Archbishops of the Welsh and Northern Ireland churches.

Justin Welby declared, “If carefully negotiated terms (of an international agreement) are not honoured and laws can be ‘legally’ broken, on what foundation does our democracy stand?”

Former Brexit minister David Jones queried the right of the bishops to interfere in what is claimed to be a specifically political issue. Too often politicians appear to see the rest of us as their playthings to manipulate as they see fit. The fact that the lives of ordinary people are harder hit than those of entitled politicians seems not to concern them.

Bishops and members of the clergy often have to deal with the human disasters that result from misguided government initiatives, like poorly managed universal credit, and arbitrary lockdown directives that tear families apart.

Archbishops of Canterbury have died for opposing the government of the day (the monarch). Thomas Becket was famously cut down by the king’s henchmen in Canterbury Cathedral. Thomas Cranmer was executed for refusing to accept the queen’s will.

Stephen Langton was another notable Archbishop. He drafted Magna Carta based on an earlier charter of Henry I. This in turn was based on earlier Anglo Saxon charters. All these charters, of course, were drafted by churchmen, the only ones who could read and write at that time. The church was therefore heavily involved in the formulation of British law.

Magna Carta was later to be a major influence on the US Constitution; it was seen by those drafting the Constitution as a reassertion of the rights of the people against an arbitrary and oppressive ruler. (The National Archives website on Magna Carta records that two clauses from Magna Carta were incorporated as the fifth and sixth Amendments of the American Constitution.)

The Bishops rightly see that the rule of law is the foundation of our democracy. Like the rest of us, they saw the way Boris Johnson, Dominic Cummings and Michael Gove sought to prorogue parliament, to prevent debate of their plans by elected MPs. This was of course subsequently ruled illegal by the UK Supreme Court 24 September 2019.

Once the government establishes it is above the law, no one is safe. Property can be seized, victims jailed indefinitely, opposition repressed by draconian laws, as happens in totalitarian regimes, where the government’s diktat is law.

Steve Pottinger: You Ask Me Where I Want to Live, My Love…

Steve Pottinger: You Ask Me Where I Want to Live, My Love...