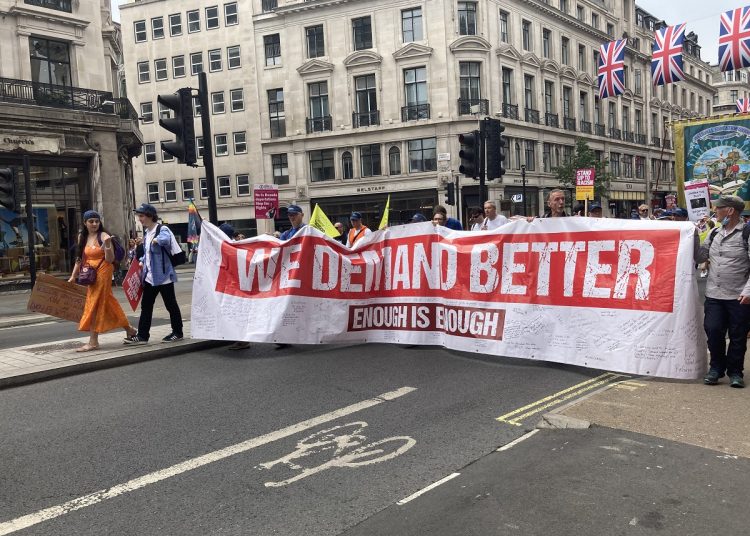 The march in London, photo by author

When northerners travel to London to march against the government, you know there’s a problem. On Saturday 18 June, many of us declared we had had enough. Several unions, including the University and College Union (Yorkshire and Humberside), Leeds NASUWT, NEU Oldham, East Riding of Yorkshire NEU, GMB Lincoln and GMB Scotland held a significant presence on the streets of central London.

Despite Johnson’s latest photo opportunity with Volodymyr Zelenskyy, his attempts at distraction no longer appear to be working. The Conservatives are in trouble, partly because they have failed to oust him, partly because of the ever-increasing poverty under their government, and partly because of ‘Partygate’.

Regardless of political leaning, most of the UK population complied with the lockdown laws that the government itself saw fit to break. We were unable to socialise, visit dying relatives, be there at the births of children, or attend funerals. Yet our leaders believed they were above these laws and partied hard.

Once the allegations of partying in Downing Street were made, Johnson failed to take responsibility from the outset, but sought instead to bluster and deflect. This dishonesty and recklessness only served to compound the government failure and corruption that we already knew about: sending elderly Covid patients back to care homes to infect other residents, and diverting public funds to friends in the form of state contracts for PPE or for the failed Test and Trace service.

The Conservatives may hope the anger over partygate will dissipate, but given their record of dishonesty, corruption and hubris, the public’s mistrust of them is likely to linger.

Perhaps some people still believe the race-baiting media and politicians who blame migrants and refugees for the financial situation in this country, when poor government is at least  partly to blame.

Constantly blaming the EU for our woes was standard practice before 2016, but since Brexit it has become more difficult for politicians and the media  to use the EU as an excuse for their own failures, although some continue to try. While some UK homes are in crisis because of fuel costs rising in the UK for example, France (a member of the EU) capped their increase – something the UK government could also have done. I would hope that there is no link between the alleged donations to the Conservatives and the reluctance to tackle the fuel crisis!

Given the friction to trade that leaving the single market created, it was clear that Brexit would lead to a poorer UK. However, when coupled with the pandemic and the war in Ukraine, Brexit has uniquely exacerbated the worldwide cost of living crisis for UK citizens: the UK is languishing at the bottom of the G20 table, and while all countries have suffered from Covid and the war, only the UK has imposed trade sanctions on itself.

Nevertheless, the Conservatives have committed to their ideologically driven Brexit. Time will tell if their egos will continue to stand in the way of the UK’s progress – all the UK has to do is join the single market and GDP will increase. 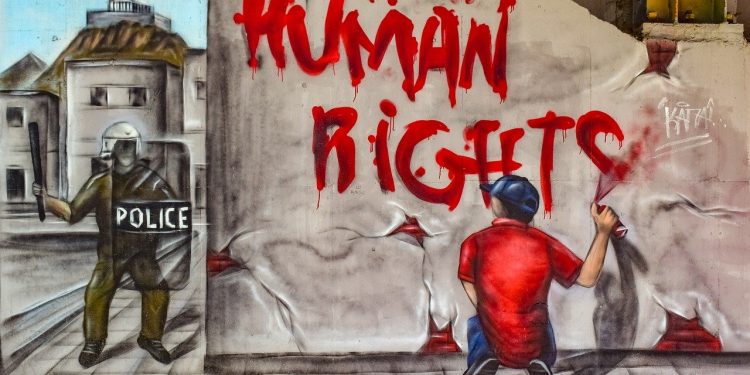 The Conservatives will no doubt pay for their commitment to Johnson, particularly as it turns out that he does not want to abide by his own ‘oven-ready Brexit’ and intends to replace the Northern Ireland protocol with a new version, without the consent of the EU. In so doing he risks peace in Northern Ireland, our relationship with the US  and the economy.

The Conservatives’ Rwanda policy also caused a stir. Firstly because it is nonsensical – there could easily be an agreement with France which is more humane and less costly (the government has paid £120m). Secondly, because it screams ‘far right’ policy (enabling  the othering by right wing media and politicians). And thirdly because it was even opposed by the Church.

It appears that the government is breaking Britain. This will mean that whoever governs next will have to clear up the mess, taking years to rectify and costing billions. If only the Conservatives had learned not to break laws, political relationships, and economic trade agreements, we would be in a better place and thousands of northerners would have been saved from having to come to London to demand better.