This week saw several sets of figures giving contradictory evidence on post-Brexit trade. So is this a surge, a rebound or a dampening? 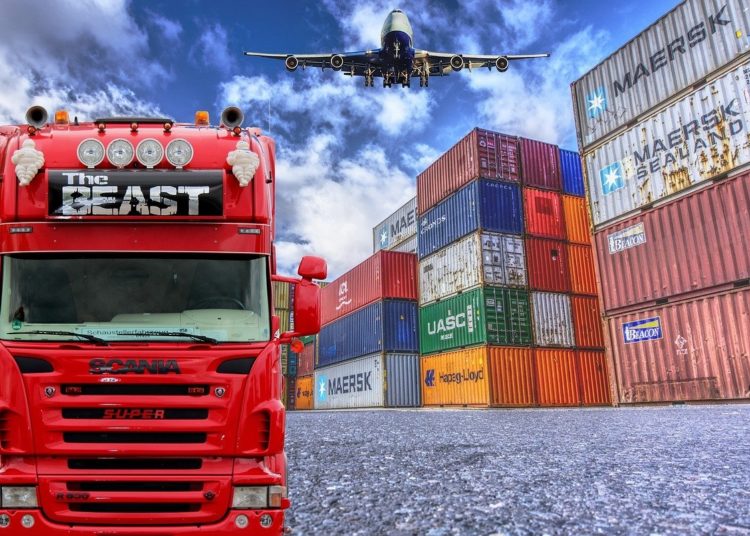 Truck and plane in front of cargo containers, image by Tumisu from Pixabay

Official trade figures released this week caused quite a stir on various pro-Brexit news outlets and websites, since they appeared to show UK exports to the EU in the second quarter of the year ‘surging’ ahead after Brexit. The truth is not quite as the headlines might have you believe.

A tweet from Foxhole News (5,000 Twitter followers) greeted the ‘stunning new figures’ with glee and final proof that project fear had been ‘busted’. Pro-EU supporters would be left ‘red faced’ apparently.

Foxhole’s report calls the figures stunning and says, “Exports shot up 29% year-on-year in June as the UK continued to pull out of the pandemic with a world-class jabbing programme and a staged reopening of society and the economy”. The report describes UK exports surging, “despite the most dire predictions from rabid pro-EU campaigners”.

Facts4EU, another pro-Brexit website, also hailed the ONS data as vindication of the five years of upheaval, with their ‘analysis’ showing UK exports to the EU have “rebounded by 31.5% since the first quarter of the year, and … are 20% higher than they were five years ago, just before the EU Referendum”.

All the figures come originally from the ONS release on Thursday of UK trade data up to the end of June, although Foxhole relies on a report on Bloomberg for their sensational claims.

The figures on the surface do seem to paint a bright picture, although I confess looking through the ONS details I cannot find either the 29 percent Bloomberg uses or the 31.5 percent Facts4EU suggest, but they are not far out. The general picture is of an economy coming out of lockdown hibernation after an enormous body blow delivered by Brexit.

The ONS urges caution however, and says that 2020 data was “strongly affected by the coronavirus pandemic”. It helpfully provides a comparison with 2018 when trade was not impacted either by Covid-19 or the end of the transition period.

Because 2020 was so unusual, a massive rebound was inevitable from such a low base. This is what the ONS says:

So, not all that rosy. I also strongly suspect the Facts4EU figure showing a 20 percent increase in exports to the EU, uses figures from Q2 2016 unadjusted for inflation, to make them appear exceptionally good.

What these reports show is the sheer desperation on behalf of Brexiters to grab anything that looks remotely like good news. Unfortunately, the ONS figures are not the lifeline they think, for several reasons.

Firstly, and perhaps most importantly, our economy and trade were never going to collapse to zero. These things are relative not absolute and whatever the figures show they will be worse than they otherwise would have been had we remained EU members. Brexiters are still clinging to the idea that erecting trade barriers with your largest trading partner will have no effect and even lead to an increase in trade.

This is impossible, as they must know.

The ONS says our exports to the EU overtook non-EU countries in May 2021 and remained higher in June. The figures indicate that while trade with the EU has shown a strong recovery, driven by a £0.9bn increase in exports of chemicals, medicinal and pharmaceutical products, exports to the rest of the world have slumped.

The ONS says, “Total exports of goods fell in June 2021, driven by falling exports to non-EU countries. There was a weak increase in exports to EU countries.” Perhaps not quite the surge that has been claimed.

Exports to the rest of the world of chemicals, cars, machinery and transport equipment, medicinal and pharmaceutical products all fell in June.

We were told by Vote Leave that one of the main reasons for Brexit was the shrinking importance of the EU market for UK exporters, which meant we needed to trade with faster growing non-EU economies in the east. To be consistent, now that exports to the EU are rising faster than non-EU exports, the same people should be pressing for the UK to rejoin, but instead this is apparently a cause for celebration.

At least our exports to the EU seem to be holding up, but in a way that is familiar to anyone who has watched UK trade over the years, imports are increasing even faster. The ONS says, “Imports of goods from EU countries drove the increase in total imports of goods in June 2021” and this has resulted in a widening of the trade deficit (the difference between what we sell abroad and what we buy) to £5.2bn in quarter 2 2021.

None of this is apparent from reading Foxhole News and Facts4EU.

EU statistics show UK imports to the bloc are falling, not rising

RTE in Ireland is reporting that imports to the EU from the UK have actually fallen by 20 percent in the first six months and in June and May were “lower than volumes recorded at the end of last year”, according to Eurostat data.

This is precisely the opposite of the ONS data released on Thursday, as RTE acknowledge. The discrepancy is apparently partly explained by a change in the way Eurostat calculates trade with Britain after Brexit.

When we were EU members, all goods which arrived in another member state from Britain were treated as British exports. But since January, goods originating outside the UK, goods made in China which are trans-shipped through Britain into the Netherlands, for example, are now treated as imports from China rather than from Britain.

Nothing can be read into the ONS figures covering such a short period, during what the ONS itself describes as “higher levels of volatility” in trade. However, the British Chambers of Commerce (BCC) issued a lengthy statement which gives a more balanced view.

William Bain, Head of Trade Policy at the BCC, said:

“There has been a slight decrease in overall exports (by £0.6bn) which has been matched by a slight increase in imports (by £1bn). The export data has been driven by increased sales to the EU (by 1.2%) as demand picked up following the release of lockdowns and the unbundling of pre-Brexit stockpiles – as firms begin to reorder. By contrast non-EU exports fell by 5.6% between May and June this year.”

Bain adds that the rise in EU imports was largely down to more cars coming into the UK. By contrast, car exports to non-EU countries saw falls over the last few months, partly explained by staff and semiconductor shortages. He said:

“This is a further signal of the dampening effect on EU-UK trade caused by the move to the new trading arrangements under the TCA. We will continue to monitor this over the coming months as further data emerges.”