The American people have rejected Trump and all he stands for by a majority of four million in a record turnout. 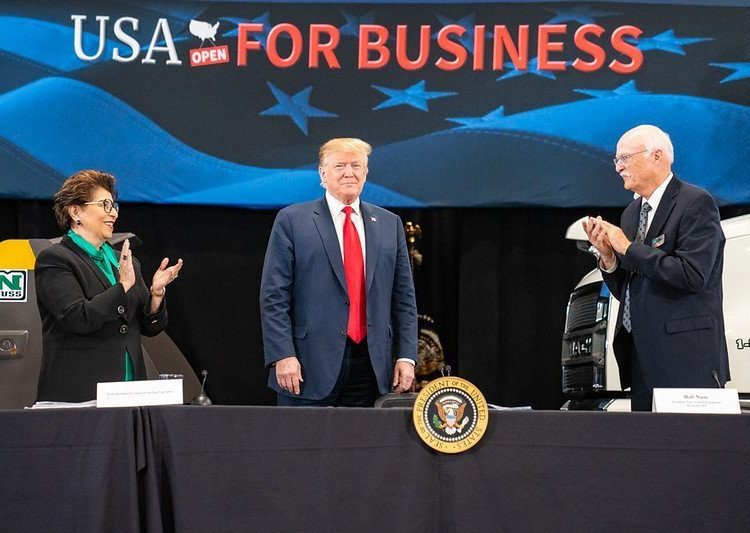 President Trump Holds a Roundtable on Tax Reform by The White House is marked with CC PDM 1.0

The good news is FOUR TRUMP-FREE YEARS. The American people have rejected Trump and all he stands for by a majority of four million in a record turnout. That is a huge defeat for the far right.

Unfortunately, life is rarely so simple as to provide us with unadulterated good news. Over 74 million Americans may have voted to rid themselves of Trump, but over 70 million wanted him to carry on with his deranged rantings from the Oval Office. The forces that created Trump are evidently very real and a long way from permanently being beaten.

We have to ask ourselves the hard questions. What makes people vote for someone like Trump? Why do some people love him? How can we change the views of people who have ideas that obviously stem from their most core emotional beliefs?

Emotions are usually driven by a mixture of hopes and fears. When a nation is strong and powerful, and richer than anywhere else on the planet, it enjoys a period of immense self-confidence. When people can see that the security of their position as number one economic power is slipping away, it creates some very dangerous and powerful emotions. That is one of the prime drivers of the fears.

Go back forty years and most working class citizens of the United States had very secure lifestyles. If you were a working class male then it was pretty easy to get a secure factory job, earn a decent union wage, pay your way to a nice home and see the kids grow up in a community that you were proud of. It must feel very different to live in a world where the factories have closed, you are working on an insecure contract as a delivery worker and the parcels you are rushing to people’s doors contain goods made in China.

It isn’t hard for a cynical manipulator to take advantage of the emotions that get generated. Yet exit polls tell us that people who earn between $30,000 and $49,999 family income voted 58 percent Biden and 41 percent Trump. Biden won the election in the rust belt, in part because he managed to persuade enough working class voters that they would be better off supporting a party that had an investment programme in future green technology, rather than buying into Trump’s whining that it isn’t fair that China has become efficient.

The group that proved more intractably loyal to Trump were people earning family incomes between $100,000 and $200,000. They voted 57 percent for Trump and 42 percent for Biden. It is this group that seems to generate a production line of shiny-faced enthusiasts for the Tea Party and its excesses. Many of these people are deeply religious and consider themselves to have strong family values. Yet they voted for a man who boasts that he grabs women by the “pussy” and dumps wives when they get too old.

Again and again during the campaign we saw footage of polite middle class people telling the interviewer that they knew that Trump had character flaws but that you had to look at what he had actually done, not at what he said. He could be relied on to keep their taxes low.

The deepest fears and insecurities of this group are much harder for leaders to tackle. If you have some money but not enormous amounts of it, then you live with insecurity. Particularly in the States. The better off section of the middle class wants to remain better off and for their children to also prosper. They deeply resent taxes, for the simple reason that at this income level you pay out quite a lot but get very little back.

People who are scared to send their children to a state school end up paying heavy fees for private education. People who expect something better than the treatment available in the state hospitals end up paying a lot for private health insurance. Many upper middle income earners in the States have a visceral fear of falling into poverty, accompanied by real anger over paying out taxes to help people who they feel have nothing in common with them. Polite middle class racism all too often comes along with this package of views, as young black working class men begin to seem very scary people indeed if you live in a suburb where you’ve never personally mixed with any.

This is not a straight issue of the richer you get the more selfish you get. Voters who said they earn over $200,000 a year were against Trump by 47 percent to 43 percent. It is people who are insecure in their privilege who are much more likely to be aggressive about protecting it and become easy meat for demagogues.

The best ways of tackling this problem aren’t quick or simple. Resentments that have built up over generations and loyalties that run deep don’t disappear in seconds.

The easiest group to persuade to think more positively are the young. Some 61 percent of people in the age category 18–29 voted for Biden and only 35 percent for Trump. The many Americans of all ages who are comfortable with forming opinions based on facts, are also an important source of change. Attitudes are changing fast. Fox news did a poll on the opinions of voters last week. It showed that 63 percent of Americans are in favour of taxing carbon-based fuels. Evidence such as Californian fires and stronger hurricane seasons is changing views.

Yet unless more is done to make middle class people become more economically secure there will always be a very real risk of the emotions that produce Trump emerging again and continuing to become more unpleasant. In a country like Sweden, people who pay taxes usually feel confident about using public services like education and health care because they are of good quality and can be relied on. That gives them an incentive to improve them instead of avoiding them. There is no need to pay once through your taxes and again through your private insurance scheme. In the States, many of the people who are appalled by the idea of paying taxes to get little in return are paying out a fortune to therapists and large numbers of apparently successful middle class people are addicted to anti-depressants. Insecurity carries a high price.

In other words, the more we allow far-right fanatics to dismantle functioning public services the more the insecurities of living inside a system of ‘everyone for themselves’ drives people into their camp. It is now over forty years since Reagan and Thatcher started rolling back the state and insisting that there is no such thing as society.

One of the enormous challenges that the progressive movement faces, is that we have to find a way of reconstructing functioning public services and making them attractive enough for middle class taxpayers to want to use them. Another is that we need to invest in modernising Western economies so that the working people can prosper in a world of much wider international competition. It is necessary to build reasons for people to be hopeful about life in their communities instead of fearful of decline and neglect. It is necessary to build a network of successful local economies and successful public services.

These things are massively easier to say than to do. I wish Joe Biden every success in making progress. I fear for what will happen if he lets four years drift by without radical change.